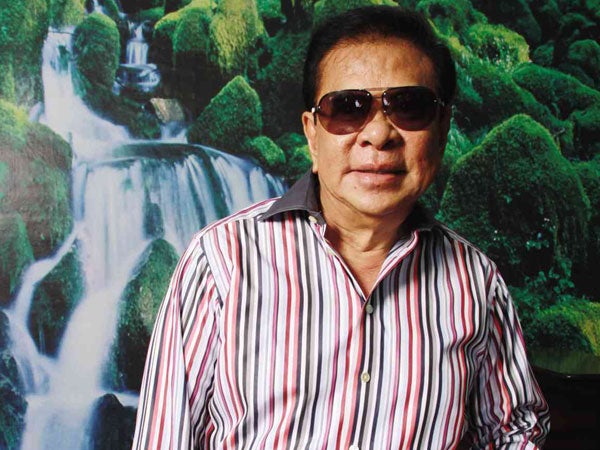 With nary a crease on his face, 71-year-old Ilocos Sur Gov. Luis “Chavit” Singson doesn’t believe in slowing down. He’s not the type to get winded after walking up several flights of stairs.

Although his life is full of demanding activities, he keeps his energy up through a variety of exercises and sports. His goal is to sweat off the toxins and the unwanted pounds.

His daily workout consists of abdominal crunches. “I used to do 600, but with my schedule, I’m down to 100.”

When he’s in Manila, he plays a couple of sets of tennis at the Manila Polo Club. “I play with ball boys. They are good. They recommend the racquet that is right for me. I use a medium one.”

Singson recalls that in his youth, he was president of the tennis club in Vigan. He credits the ball boys for teaching him the strokes and for developing the right timing.

In his six-story residence in Vigan, he enjoys practicing kung fu with a martial arts master on the roof deck. Coordinated breathing and the slow, traditional hand movements in kung fu provide good cardiovascular exercise and also improve his mental focus. “It feels great to sweat and bathe afterward.”

Singson also eats healthy. For breakfast, he likes to mix egg and vegetables. During lunch and dinners, he favors fish over pork.

“Doctors say pork has too much cholesterol, but that’s because we eat everything, including the skin,” he observes.

Four years ago, Singson had stem cell therapy in Japan. “There are all kinds of stem cell sources, like bone marrow and the unborn black mountain sheep. I don’t believe in that. In Japan, they harvest the fat from your body and incubate it to  multiply it into 80 million cells. The younger the cells, the better,” he says.

Singson notes how the stem cell therapy addressed his joint pain and boosted his vitality.

His term as governor winding up, Singson is looking forward to focusing on his enterprises. “I don’t consider this retirement. I was not able to give attention to my businesses—real estate, buses, airline. I’ve got to fix them up.

“When I was young, I liked doing business. I once bought an electric plant. I was the biggest buyer for the tobacco trading before Lucio Tan came in. Then I entered politics. When I became governor, my being a trader posed a conflict of interest. I gave the business to Lucio Tan when Marcos asked me to help him.”

To maintain his youthful appearance, Singson doesn’t dwell on problems. “They make you age. When there are situations, I don’t take them to heart. If something happened, it’s  done. Past is past. If you take them too seriously, you will age. I don’t dwell on negativity. I charge it to experience and move on.”

To escape, Singson goes hunting and fishing. He goes for wild ducks in Ilocos Sur. His other hunting grounds are Mindoro, Pampanga, Sweden, Australia and South Africa in June.

Fishing provides him serenity. “Our place is a tuna belt. But when I have a lot of catch, I give them away. The most important thing is the picture-taking after the catch.”