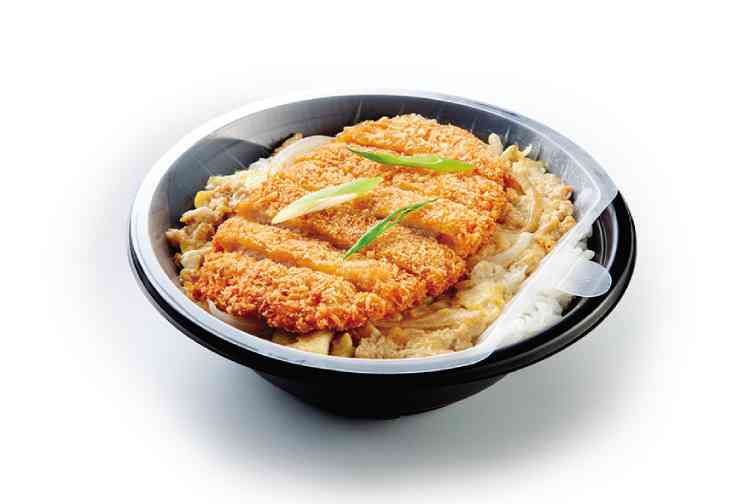 Japan’s top convenience store has just opened at Glorietta, offering what is getting to be the hot-selling food-to-go, which for sure, foodie town Metro Manila will binge on for weeks to come—katsudon and chicken adobo rice.

Then there’s the soft serve ice cream (ginumis with green tea flavor, believe it or not), which you can twirl to the max. Unlimited twirl—now, we thought we’d seen everything in foodie heaven.

You can’t get any more hybrid than that—an interesting fusion of Filipino and Japanese palates (although admittedly, the Filipino katsudon is really different from the honest-to-goodness Japanese katsudon).

Family Mart is the Tantoco family’s first venture into the convenience-store business, capping months of speculation about what the country’s foremost luxury retail clan was really up to. (Not yet, Chanel.)

In fact, Family Mart is the venture of the Tantocos’ Stores Specialists Inc. (SSI) with Ayala Land and their foreign partners Itochu Corp. and Family Mart Co. Ltd. of Japan.

This joint venture, which will pour in P2 billion in five years, is out to raise the bar for the convenience-store business in the country, primarily through a cleaner, fresher, brighter

Family Mart was introduced to media by the top executives of SSI, Ayala Land and Itochu at the Conservatory of Peninsula Manila last Monday. For the media luncheon, a canopy was set up in the Conservatory foyer where food tables were spread out, offering the more than 80 items sold at Family Mart 24/7—from the burgers (chicken, cheeseburger, fish burger) to the sandwiches (chicken caesar with parmesan cheese), cha soba to the soft serve ice cream. Lunch came in bento boxes.

The officials were one in assuring that Family Mart would reshape convenience-store shopping experience in the country.

Huang explained his family’s entry into the convenience-store business. “We’ve always been on the lookout for new retail formats to broaden our target market, so this is aligned with the vision of widening our customer base.”

He added, “This, of course, dovetailed the country’s very good economic performance and also our demographics that’s getting younger… Getting a large-format retail space can be difficult, but a convenience store space is just right.”

Also at the launch, Japan’s Family Mart officials noted how there are more than 50,000 convenience stores in Japan, but only about a thousand here. This denotes the big room for growth.

Family Mart opened in Japan in 1973. (Not many know that the 7-11 store chain also originated in Japan.)

Huang also noted the growing middle class in the Philippines, while Ayala Land’s Dy, now Family Mart director, pointed to how the convenience store concept is integrated with the

mixed-use developments that are fast going up all over the country.

After the Family Mart at Glorietta, there will be about 40 more stores in the country this year, and that number will double next year. The projection is 900 stores in less than 10 years.

Also opening this year are stores in Exchange Regency (Residence Hotel) in Ortigas, with other branches in Global 1 Eastwood City in Taguig, Dela Rosa Carpark 1 in Makati City, Metro Point Mall in Pasay City, and the District in Cavite City already in the works.

The officials said that Family Mart would be differentiated from other convenience stores mainly by the more convenient shopping experience. “You’ll not be smelling of frying oil when you come out of the store”—and more varied and better quality offerings, including Japanese staple, like sake, kani salad and the famous Meiji chocolate.

There will be free Wi-Fi access, clean rest rooms and comfortable dining spaces.

Family Mart harps on traditional Filipino family values, and to come across as “family” to its customers.

Not many know that it was strong family ties among the Tantocos that also brought Family Mart to the clan. Anton’s cousin, Donnie Tantoco, who heads Rustan’s Supermarkets, has always had strong ties to Family Mart. In time, Anton and Donnie—the eldest of the third-generation Tantocos—decided to talk to Ayala about a partnership to bring in Family Mart.

“Now is the right time (to bring in Family Mart),” stressed Huang. He noted that when Family Mart and other convenience stores began to take off in Japan, it was also when the country

had impressive GDP growth, much like what we have now.

In the meantime, however, when it comes to soft serve ice cream, Huang can do only up to two twirls—he should do better than that.

Three more branches are set to open in the next few months, which include stores in Glorietta 5 and Ayala Avenue MRT Station 3. Family Mart is on track to open 40 stores this year.