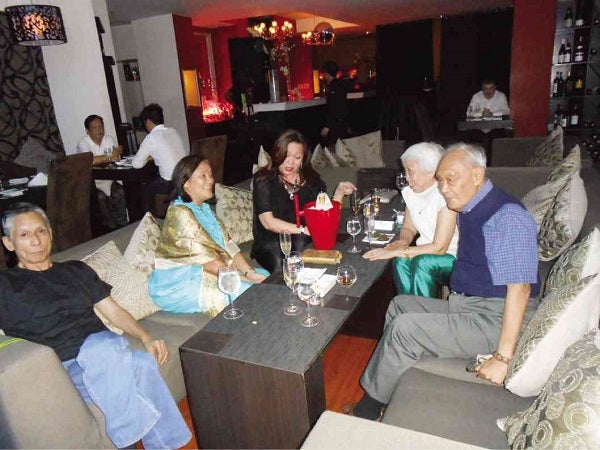 Conspiracy Garden Café (59 Visayas Ave., Project 6, Quezon City) is the offshoot of an idea that musicians can open and operate their own venue for live performances.

It’s actually a cooperative composed of more than 100 shareholders led by singer-songwriters Joey Ayala, Noel Cabangon, Gary Granada and other like-minded artists, including writers, poets and their friends. Thus, the gigs held in Conspiracy are mostly acoustic sets.

The place used to be a house; there is a garden, as its name suggests, where friends chat while drinking al fresco. Inside the club are two rooms—on the right is the bar and a few tables; on the left is where the gigs are held.

There is a bohemian vibe which recalls Hobbit House on its original site in Mabini, Manila, and ’70s Bistro (before it was refurbished) in Anonas, Quezon City.

It is a Tuesday night and journalist/poet Pete Lacaba is hosting an edition of “Salinawit”—the series of jam sessions that features a mixed lineup of artists singing Lacaba’s Filipino translations of jazz and pop classics.

Tonight’s performers are Eileen Sison, Skarlet, Joey Ayala and Lacaba himself, with Ferdie Borja on piano.

Translating lyrics is a tricky exercise, and Lacaba knows fully well that doing it word for word or in its literal sense would sound corny, if not awkward. But what he has accomplished deserves a book of its own: From a few pieces, the “Salinawit” repertoire has multiplied to 134 songs as of February 2012.

We feel the beauty of the Filipino language when Ayala interprets John Denver’s “Perhaps Love”: “Marahil, ang pag-ibig ay/Kanlungan sa ulan/May init na ibibigay/Kung ika’y giniginaw…” (“Perhaps love is like a resting place/A shelter from the storm/It exists to give you comfort/It is there to keep you warm…”)

We also chuckle at Lacaba’s wit, as he probably struggled to find the proper hip term to fit into a Phil Collins hit: “Wouldn’t you agree/Baby, you and me got a groovy kind of love…” (“Di mo ba alam/Grabe, irog ko, grabe ka kung magmahal…”)

Walking toward the bar during the break, we spot Inquirer columnist Conrad de Quiros at a table with singer-songwriters Cooky Chua and Lolita Carbon.

Filmmaker Jun Urbano enters the main music room. He tells us that he came to meet with Ayala, whom he has asked to write the soundtrack to a new movie he’s directing.

In the audience are AMP band leader and musical director Mel Villena, and poets Marne Kilates and Charleson Ong—who would all stand up and jam on the mic as the night wore on.

Before we leave, the translation to the Jack Jones hit (original French music and lyrics by Charles Aznavour) caresses our soul. Sung by Skarlet, it is no longer the gender-specific “She”: “Siya ang di malimot na ganda/Na ang timpla’y ibang-iba/Haplos ng hangin o haplit ng tag-araw…”

Surely “Salinawit” is the perfect antidote to videoke singing.

Society Lounge has classy interiors and a relaxed mood; its chef and managing partner, Patrice Freuslon, is French.

We have yet to try its Euro-Asian cuisine, ordering just San Mig Lights instead because the crowd and the music are quite interesting distractions.

Celdran is an unconventional singer. Her voice is not pretty in the pop sense of the word, but it has a distinct character that recalls Edith Piaf, whose songs she loves to cover, aside from jazz standards like “I Got Rhythm,” “God Bless the Child,” “Summertime,” “You Go To My Head” and “But Not For Me.”

She even sings “Autumn Leaves” in its original French incarnation, “Les feuilles mortes.”

The biggest surprise is that Celdran has been writing her own songs, one of which she previews that Thursday night. Some of the lyrics go, “Call me crazy… I know one day/He’ll show me the way/I trust… come what may…”

We think she’s referring to the jazz musician she fell in love with—perhaps the main reason she decided to drop her corporate job and sing her heart out.

In any case, whether at Conspiracy or at Society Lounge, the subject of love and its joys and complications sound deeply engrossing when sung in different tongues.