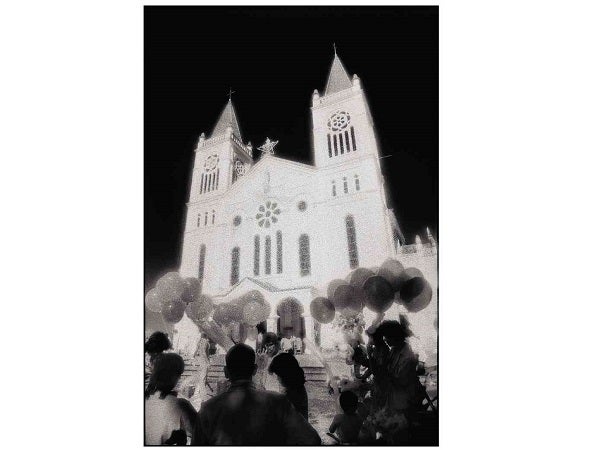 Using IR (infrared) film, the country’s leading photographer captured images of family and friends in Baguio and other sites around the Philippines. The photographs show what we cannot see, as IR photography produces fascinating, sometimes surreal, effects: the skin takes a milky, smooth texture; eyes appear ghostly. Black clothing appears gray or white, and blue skies have a dramatic appearance.

These effects provide the magic of IR photography—just about everything looks different from what we usually observe within the visible light spectrum.

Tysmans says, “What really attracted me to black-and-white IR film is that the blue skies become very dark gray to black, and the foliage turns to whitish gray which adds to the stark contrast of the scenery. Which is why I did landscapes—the contrast makes the foliage pop out against the black skies.”

Most of the photographs were taken between November and February in the ’80s, when there were fewer clouds, especially in Baguio.

“When I would wake up and see the clear blue skies, I would gather family and friends since they were the most accessible subjects. I always had a camera loaded with IR film, dedicated to these spontaneous shoot opportunities.

“Many times, I would shoot the Baguio Cathedral, the most imposing piece of architecture then, and the morning sun always hit its façade,” Tysmans adds.

It was the photographer’s experiment with a novel medium, and not all the pictures were printed at the time.

Earlier this year, Tysmans was happy to rediscover the negatives in an old trunk. He selected a number of images that are now presented in this exhibit.

Memories, and the act of remembering, have been the preoccupation of artists—poets, painters, writers, filmmakers and photographers. The photographic medium, now more than a century old, has taken pride in showing life “as it actually is.” And yet, as these images show, there is a reality hidden from us, a dimension that is not visible, at least to our usual way of seeing.

As the artist turns 60, a milestone often associated with coming full circle, Tysmans recalls visions of half a lifetime ago, of people dear, in places close to his heart.

“Photographic Memories” will be on view at the Print Gallery of BenCab Museum until May 26.