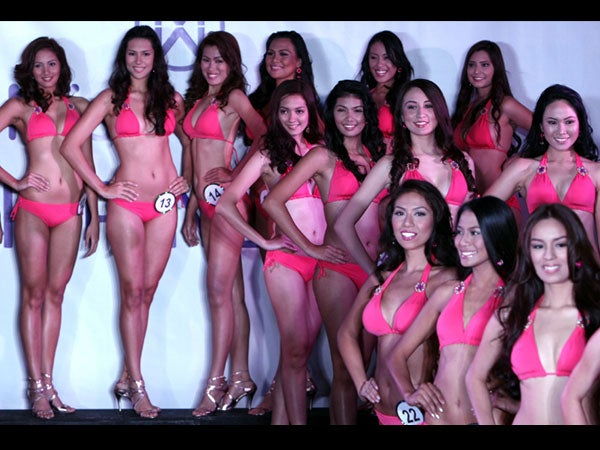 Beauties vying for the Miss World Philippines title pose as they are presented to the media Thursday. AP

MANILA, Philippines—The Miss World crown is still the most elusive beauty title for Filipino women, and 25 women have presented themselves as the country’s hope in the 60-year-old international competition.

“This is an exciting, inspiring beginning,” Quirino told spectators gathered at the hotel’s penthouse. “It is my greatest dream to bring that [Miss World] crown to the Philippines,” she added.

No Filipino woman has ever won the Miss World title “because we haven’t given the pageant and the title itself special importance, attention and focus,” Quirino told the Inquirer.

The Miss World franchise in the Philippines was previously held by the Miss Republic of the Philippines Contest, then the Mutya ng Pilipinas Pageant, and from 1992 until last year, by the Binibining Pilipinas Charities Inc. (BPCI). This is the first time that a Philippine pageant will be held solely for Miss World.

“With the support of the Filipino people rallying behind the title Miss World Philippines, we might just win the Miss World crown this year,” Quirino said.

To make the Philippines’ would-be representative more competitive, Quirino said she raised the minimum height requirement to 5-foot-6. “It didn’t matter whether they have college education or could speak fluent English, for as long as they spoke sincerely and were fresh and beautiful and smart,” Quirino said.

She also revealed that interpreters will be allowed, not only for the national contest, but also for the representative who will be chosen to carry the Philippine flag in the Miss World finals in London on November 6.

The winner will receive P1 million and a condominium unit from SM Development Corp., considered the biggest prize package in Philippine pageant history.

Among the crop of aspirants are familiar faces who come from rival pageants Binibining Pilipinas and Miss Philippines-Earth.

“I resigned, but not just for one reason. I resigned for several reasons which I stated in my letter,” Henson told the Inquirer, refusing to elaborate. Her 18-month contract with the BPCI expires next month.

Henson’s fellow runner-up, Diane Necio, also resigned her spot to rejoin the Binibining Pilipinas pageant this April. Necio bagged a title and will now represent the country in the Miss International beauty pageant. Henson hopes to duplicate her friend’s feat.

“I’m more positive this time. Even if this is a tough competition for everyone, with so many beautiful, talented and smart ladies, it’s all about luck. I’ll pray for my victory and I hope the people will be happy for me,” Henson said.

Filipino-French model Gwendolyn Ruias, who also joined Binibini with Henson in 2010, is likewise aspiring to be the country’s first Miss World winner.

Ruais, the tallest candidate at 5-11, was an early favorite in Binibini and finished as a semifinalist.

“Now I know exactly what I want. I’m very determined. This is not just about discovering something new. It’s something I really want so I’m giving it my all. And my goal really is to bring home the crown, not only locally but internationally,” she told the Inquirer.