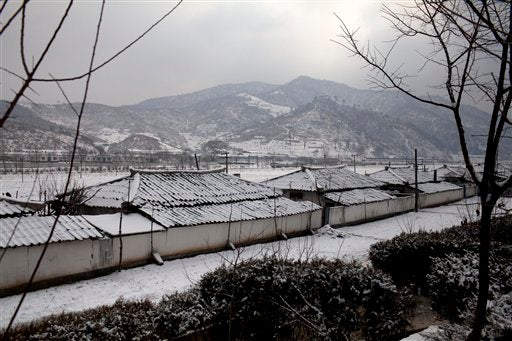 PYONGYANG, North Korea – The heart of this city, once famous for its Dickensian darkness, now pulsates with neon.

Glossy construction downtown has altered the Pyongyang skyline. Inside supermarkets where shopgirls wear French designer labels, people with money can buy Italian wine, Swiss chocolates, kiwifruit imported from New Zealand and fresh-baked croissants. They can get facials, lie in tanning booths, play a round of mini golf or sip cappuccinos and cocktails while listening to classical music.

Pyongyang has long been a city apart from the rest of North Korea, a showcase capital dubbed a “socialist fairyland” by state media.

A year after leader Kim Jong Un promised in a speech to bring an end to the “era of belt-tightening” and economic hardship in North Korea, the gap between the haves and have-nots has only grown with Pyongyang’s transformation.

Beyond the main streets of the capital and in the towns and villages beyond, life is grindingly tough. Food is rationed, electricity is a precious commodity and people get around by walking, cycling or hopping into the backs of trucks. Most homes lack running water or plumbing. Health care is free, but aid workers say medicine is in short supply.

And while the differences between the showcase capital and the hardscrabble countryside grow starker, North Koreans feel the effects of authoritarian rule no matter where they live.

It’s illegal for them to interact with foreigners without permission. Very few have access to the Internet. They calibrate their words. Most parrot phrases they’ve heard in state media, still the safest way to answer questions in a country where state security remains tight and terrifying.

But in 2010 and throughout 2011, as then-leader Kim Jong Il was grooming son Kim Jong Un to succeed him, Pyongyang was a city under construction. Scaffolding covered the fronts of buildings across the city. Red banners painted with slogan “At a breath” — implying breakneck work at a breathless pace — fluttered from the skeletons of skyscrapers built by soldiers.

Often, the soldiers were scrawny conscripts in thin canvas sneakers, piling bricks onto stretchers or hauling them by hand. In 2011, soldiers working on the Mansudae District complex set up temporary camps along the Taedong River, makeshift shantytowns decorated by red flags. After tearing down the tents, the soldiers built a playground for children where their encampment once stood.

Their work was focused downtown, on Changjon Street, where ramshackle cottages were torn down to make way for department stores, restaurants and high-rise apartments.

Today, the street would not look out of place in Seoul, Shanghai or Singapore. Indeed, many of the goods — Hershey’s Kisses, Coca-Cola and Doritos — on sale at the new supermarket were imported from China and Singapore.

Changjon Street reflects a change of thinking in North Korea. For years, foreign goods and customs were regarded with suspicion, even as they were secretly coveted, especially by those who had traveled abroad or had family in Japan or China.

Kim Jong Un has addressed their curiosity by importing goods and by quoting his father in saying North Korea is “looking out onto the world” — a country that must become familiar with international customs even if it continues to prefer its own.

“What is a ‘delicatessen’?” one North Korean at the new supermarket asked as a butcher in a white chef’s hat sliced tuna for takeaway sashimi beneath a deli sign written in English. Upstairs, baristas were serving Italian espressos and bakers churned out baguettes and white wedding cakes.

English, language of the North’s archenemy, is outstripping Russian and Chinese as the foreign language of choice. Over the past six months, a new TV channel, Ryongnamsan, has aired “Finding Nemo,” ”The Lion King” and “Madagascar” in English — the first broadcasts of American cartoons on North Korean state TV.

Kim has not made it significantly easier for North Koreans to travel, channel surf or read travelogues posted online, but he is arranging to bring the Eiffel Tower and Big Ben to them in the form of a miniature world park slated to open later this year.

And Pyongyang now has a parade of fashionistas in eye-popping belted jackets, sparkly barrettes clipped to their hair, fingernails painted with a clear gloss.

At one beauty salon, the rage is for short cuts made popular by singers from the all-girl Moranbong band who have jazzed up North Korea’s staid performance scene with their bobbed hair, little black dresses and electric guitars.

“There are so many young women asking to get their hair done like them,” hairstylist Chae Cho Yong said.

Around her, a cavernous barber shop was empty. An employee explained that most North Koreans are at weekly propaganda study sessions on Saturdays, the only day of the week foreigners are allowed inside.

The most coveted housing in North Korea, where homes and jobs are doled out by the state or the powerful Workers’ Party, is an apartment on Changjon Street.

One new resident, Mun Kang Sun, gave The Associated Press a tour of the apartment she and her husband were given in recognition for her work at the Kim Jong Suk Textile Factory.

A framed wedding portrait hangs on the wall above their Western-style bed. There’s a washing machine in the bathroom, an IBM computer in the study and a 42-inch widescreen TV.

Mun said she was an orphan who began working in factories at age 16. She earned the title “hero of the republic” after exceeding her work quota by 200 percent for 13 years. She says she accomplished that by dashing around the factory floor operating four or five machines at once.

“When we heard the news that we’d get a nest where we can rest, and we got the key for our apartment and took a look around, we were totally shocked because the house is so nice,” her husband, Kim Hyok, told AP. “It’s still hard to believe this is my home; it still feels like we’re living in a hotel.”

Though the apartment has faucets, old habits die hard. The bathtub was still filled with water, a bucket bobbing in the tub, as in countless homes across the country where water is pumped from a well, carried in by hand and used sparingly.

One by one, North Korean buildings are getting upgraded but most are still drafty, the walls poorly insulated. Elevators and heat are rare. North Koreans are accustomed to wearing winter jackets and thermal underwear indoors from October to April.

Power cuts have been less frequent in Pyongyang as electricity-generating capacity has grown, but it’s still common for the lights to go out in the middle of dinner. Most people just carry on drinking and eating.

Outside Pyongyang, the power grid offers little relief from the darkness. West of the capital in the town of Ryonggang, lights were out as soon as the sun set. At one inn, two women stood chatting quietly in a lobby lit with a candle as a shrill voice from a radio broadcast chortled from loudspeakers nearby.

Even North Korea’s second-largest city, Hamhung, has little of the capital’s urban feel.

Few private cars ply the streets in the city, which is the industrial heart of the country.

Hamhung’s bus line is largely limited to one main route through town. Soldiers cram into the backs of trucks powered by wood-burning stoves that send smoke billowing behind them.

Some people live in relative comfort. Kim Jong Jin’s farmhouse in Hamhung is simple but spotless, the papered floors clean enough to eat from. Water is piped into a well in the kitchen.

Heat comes from the traditional Korean “ondol” system of feeding an underground furnace with wood. Waste is turned into methane gas for cooking.

Electric service is spotty, but the family has a generator, so they’re able to watch movies at night on the TV they carefully cover with a frilly lace veil.

That is luxurious living compared to the poverty that is evident in the countryside.

A mother huddles over a child as she sits shivering by the side of the road. Barefoot boys in a village destroyed by summer flooding are dressed in little more than underwear, the splotchy faces and gaunt frames of young soldiers who do not get enough to eat.

Bicycles are piled high with bundles of firewood, sometimes even a dead pig. Old men sit crouched by the side of the road with bike pumps, offering to fix flats. Oxen plod past pulling carts.

Paved highways pocked with potholes radiate from Pyongyang. But beyond these roads in dire need of repair, there are no roads between the denuded mountains, just dirt paths that become dangerously muddy with rainfall and treacherously slippery in winter. Villagers struggle to clear snow with makeshift shovels crafted out of planks of wood.

Life in the North Korean countryside would be familiar to South Koreans old enough to recall the poverty in their nation just after the Korean War. Indeed, into the 1970s, North Korea was the richer of the two Koreas.

North Korea blames its growing international economic isolation on the U.S., which has led efforts to punish it for developing its nuclear weapons program. But in the capital, the effects of that isolation are less apparent, thanks largely to goods from China, the North’s most important ally, and other countries such as Singapore and Indonesia. Shelves are stocked with goods, computer labs filled with PCs, streets crowded with VWs.

While millions can’t afford meat or fish, and subsist on a few potatoes or a bowl of cornmeal noodles each day, the well-to-do in Pyongyang with extra sources of income can buy beef, pomegranates and vine-ripened tomatoes.

There’s even a growing cosmopolitan vibe. At one European-style restaurant Friday, a young couple on a date sipped cocktails topped off with Maraschino cherries and feasted on pizza, their cellphones rattling beside them from time to time.