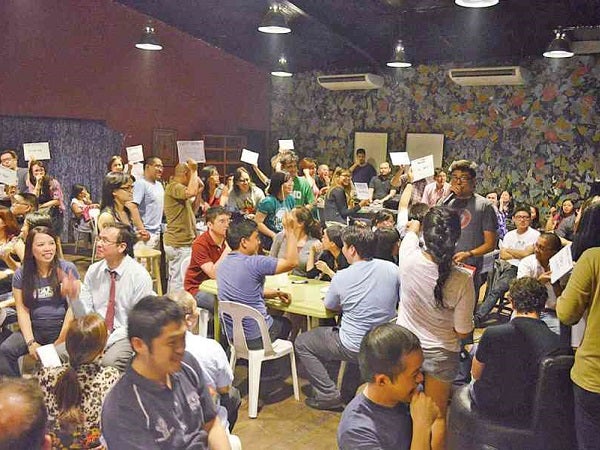 The Philippine Educational Theater Association (Peta) is opening its doors to different events outside of its lineup of theater productions. This May and June, Peta presents “Improv Night” and “Geek Fight! Trivia Nights” to kick off The Peta Theater Center Roofdeck Series.

Silly People’s Improv Theater or SPIT, the country’s leading improvisational comedy theater group, presents “Improv Night” on May 15 and 22, 8 p.m. SPIT is known for unscripted, unrehearsed and spontaneous performances made of improvisation and comedy sketches created on the spot by a set of experienced improv theater actors.

With close to 500 performances in 10 years, SPIT has captivated local and international audiences in some of the best entertainment spots in Metro Manila. The group also represented the Philippines in the Los Angeles Comedy Festival in 2004, and in the Hong Kong International Improv Festival in 2012.

PETA’s Roofdeck Series also has something to offer to trivia fanatics and competitive geeks on May 31 and June 21, 8 p.m. “Geek Fight! Trivia Nights,” a popular event in UK pubs, has come to restaurants and bars around the metro, and now to The Peta Theater Center.

A wide variety of questions on pop culture, including music, literature, current events, movies and even mobile phone apps, will be raised. A fresh alternative to the usual barkada gimmick, “Geek Fight! Trivia Nights” requires six participants per team to go head-to-head against fellow geeks with broad knowledge about anything under the sun.

“Improv Night” and “Geek Fight! Trivia Nights” will take place at Peta’s unique and creative hub in New Manila, Quezon City. Booze and food will be available at the venue to add flavor to the night.

With these events, Peta explores opportunities to bring pure enjoyment to audiences looking for a good time. Peta’s open-air roofdeck is now offered as an ideal space for small gatherings, intimate performances, and various events.