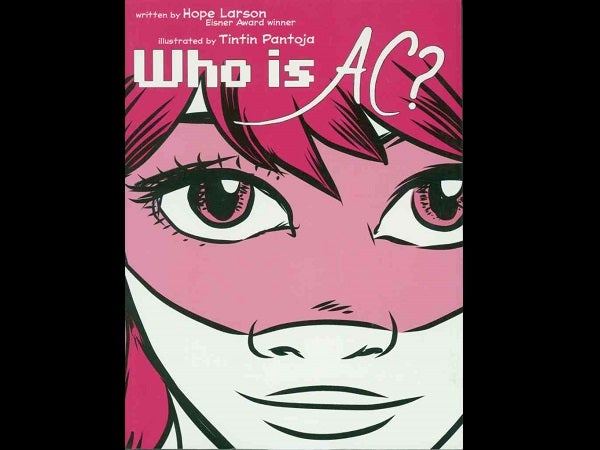 The (Graphic) Adventures of Tintin 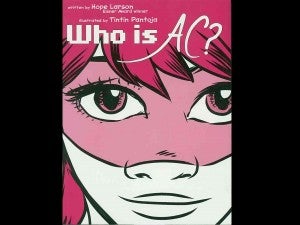 Like the elements of her art and the travails of the comic strip hero she shares a moniker with, Tintin Pantoja has been all over the map. Born in Manila, raised in Indonesia and educated in the United States, this 33-year-old has achieved what many comic book artists consider to be the dream of a lifetime: being published internationally.

“Who is AC?” is a graphic novel just out from Atheneum Books for Young Readers, an imprint for New York publishing house Simon & Schuster. The book by Hope Larson was illustrated by Pantoja and launched by National Book Store (NBS) at the big Summer Komikon on April 13, several days before its American release.

Pantoja, who brought her own pink Sharpie to sign her books at the launch, recalled the experience: “It’s always a good feeling to have someone enjoy something you helped to create.”

That moment gave her an unusual high, added this comic book artist who, though already published internationally, has never been published in the Philippines.

Maria Kristina San Buenaventura Pantoja was born April 6, 1980 in Manila, the eldest of four children born to businessman Rodolfo Pantoja and his wife, Tess, a baker.  With the paterfamilias working in Jakarta, the family decamped to this Indonesian capital in 1991. The young Pantoja returned to the Philippines in 1998 to study at the Ateneo de Manila University before enrolling at the prestigious School of Visual Arts (SVA) in New York, where she graduated in 2005 with a BFA in illustration and cartooning.

Drawing had been an early passion. “I doodled as a kid ever since I can remember,” she said in a deliberate manner that belies the energy unleashed by her drawings. Tintin drew on a wide range of influences in her art. She loved “The Last Unicorn” (both the novel by Peter Beagle and the Rankin-Bass animated movie adaptation), read a lot of Archie comics, and loved Marvel’s “The Uncanny X-Men” as well as the shifting shapes of the original “Transformers” TV cartoon.

Of course, there was anime, such as the “Sailor Moon” series, and a good dose of manga that was widely available in Indonesia.

All these came together in Tintin’s art, which she described as “pretty much a mishmash, with bits of Archie and Tintin (the classic Belgian character created by Hergé), American comic books and manga.”

Her art, noted comic book creator and Ateneo Fine Arts instructor Elbert Or, had a lot going for it. “What I’ve always loved about Pantoja’s work-and I’ve been familiar with it since she was in college-was the cleanliness not just of the line work, but the storytelling as well. No extraneous line or panel, everything committed to paper has a purpose.”

Taking up art in Manhattan was something she just wanted to do, Pantoja said. “There was a comics boom then, comics were everywhere and lots of indies were coming out,” she recalled. “I saw all that on the Internet and thought there may be a career there.” It was “a murky time,” she said, but she finally made her choice and later realized how good it was.

With American Becky Cloonan being a big influence at that time, Pantoja decided to follow in the comic book creator’s footsteps and go to SVA as well.

There, a teacher helped Pantoja make contact with writer Adam Sexton, who wanted to adapt William Shakespeare’s “Hamlet” in English language manga to make it accessible to a new generation of readers. Pantoja provided the visuals for the well-received “Shakespeare’s Hamlet: The Manga Edition” published in 2008 by John Wiley & Sons.

The young Pantoja ended up doing the visuals for three books of Graphic Universe’s Manga Math Mysteries series, “The Hundred-Dollar Robber,” “The Ancient Formula” and “The Lost Key.”

In 2003, Tintin wrote and illustrated her graphic novel “Sevenplains,” a mistaken identity adventure set on an alternate 18th-century Earth. She first made it available online before printing copies and selling them in a few American comic book shops.

In 2010, Tintin learned about the search for an artist for an upcoming graphic novel by writer Hope Larson who, in 2007, won an Eisner Award, the comic book world’s highest honor.  Larson, one of comicdom’s most original voices, is also known for the child-like nature of her work in such titles as 2005’s “Salamander Dream,” 2008’s “Chiggers” and 2010’s “Mercury.” She also adapted Madeleine L’Engle’s “A Wrinkle in Time” last year.

Several weeks after submitting samples of her work, Pantoja found out that she got the gig for the graphic novel “Who is AC?”

Said the novel’s writer via e-mail:  “I was familiar with Tintin’s work as a webcartoonist, so I knew she could handle the job. I also remembered seeing this great Wonder Woman pitch she drew a few years ago, and being really impressed by that. She was really enthusiastic about the project, too, and that counts a lot with me! It’s always best to find collaborators who care about the work you’re doing together.”

It took Pantoja a year to finish the art itself, which was being fine-tuned until last December. “I enjoyed designing Hope’s characters and giving them these quirky flourishes,” she explained. “Hope’s script was very clear and she gave me a lot of freedom in interpreting it for the comic.”

Thanks to technology which changed the way comic books are made, writer and artist worked from both sides of the world and communicated mainly through e-mail, though they did manage to meet once.

The working arrangement, though convenient, has its drawbacks, Pantoja said. “Not being in the US is hard because you fail to attend the American comic conventions where you can showcase your work the usual way. (Working through the) Net also makes you more dependent on it, which can be a blessing and a curse.”

The technical aspect aside, working with Pantoja had been a good experience for Larson.  “I loved working with Tintin,” she said. “I remember when she sent over the first rough pencils for the book-I was so excited I was jumping around the room. It felt like someone had made a special Saturday morning cartoon just for me! This is my sixth book, but the first one I didn’t draw myself, and Tintin made the whole experience easy and fun. She’s a complete professional.”

In the graphic novel “Who is AC?,” the teenaged Lin Carrol finds herself transplanted with her family to sleepy Barnhurst where she spends her time writing a novel. But her cellphone starts being weird.  Later, when she happens upon a holdup, the teenager finds herself literally transformed into a super-heroine, later named “AC” (You have to read it to find out why).

Meanwhile, the Internet turns out to have a menace of its own (trolls, of a sort!) which not only wants to take over teenagers but also seeks control of Lin’s powers.

Full of action and funny lines, “Who is AC?” is a smartly crafted tale of adolescence and super powers, and is a witty, inventive take on what’s on the Net. Its characters talk like real teenagers and the super-powered aspects come across as modern and ironic.

The novel, which is just begging for a sequel, was illustrated in a dynamic, winning fashion by Pantoja. “It’s really for kids aged 8 to 12 who are interested in fantasy, adventure and super heroes,” she said.

The art apparently adds a lot to the book.  Noted Larson:  “Tintin’s art brought a lot of energy and humor to the comic. She’s great at drawing fight scenes.”

Getting published internationally again is another high point for the young artist and has its advantages, said Or, the creator of the “Bakemono High” strip and illustrator of the graphic novel “Lola: A Ghost Story,” written by Filipino-Canadian J. Torres and published by the Portland, Oregon-based Oni Press.

“I think the best part of being published internationally is having so many doors opened for me,” Or said. “I got to meet and interact with people I otherwise wouldn’t have met.”

He added that Filipino artists make for a good choice for graphic novel projects like “Who is AC?”

“I suppose raw talent is a big reason, though I’d also like to think that there’s something about our long history of cultural immersion in, and appropriation of, the cultures of the Spanish, the Americans, Japanese, etc., that allows us to easily take on foreign storytelling sensibilities. We are influenced by them, but are still able to bring in our individual identities.”

That works just fine for Pantoja, a self-described “Third Culture Kid” since her Jakarta days. “(But) my Tagalog could be better,” she admitted.

As the graphic novel and her art have proven, Pantoja is a citizen of the new world, who mixes and makes the most of East and West. She continues to enjoy good stuff, like great manga (she recommends “Antique Bakery” by Fumi Yoshinaga, a series also adapted into anime and a live-action show), and good TV (she’s a fan of “Supernatural”).

There are other matters worth attending to, like writing more, she added.  She’d like to both write and draw a book by herself again. “Ideally, I’d like to do a graphic novel once every two years,” Pantoja said. “I do want to start working on some young adult scripts though mostly fantasy and adventure. I’m not a very realistic person in that sense. I’d like to make stories based on fairy tales or ancient Southeast Asia, with magic and dragons and things like that.”

For Pantoja, for whom the future holds more tales of fantasy and adventure, Or has one piece of advice: Just do it! “Start with smaller, shorter stories, if that helps, but try it out. The best way to figure it out is to try it out yourself.”

Larson has a similar tip:  “Dive in and make some comics. You don’t need any special skills, or even be a strong draftsman; you just need to be hardworking and persistent. And don’t worry about your work being of professional quality right away! Comics and writing are arts that one never really masters.  You can spend a whole lifetime learning them and still have things left to discover. The journey is the destination.”

There is, after all, always room for original voices and new graphic novels.

And Pantoja makes sure she can help bring out those voices by handling a comic and manga workshop in Pasig, something she is excited about. After moving to the ends of the Earth and seeing her art evolve, she is ready to share what she knows with other similarly inclined people.

“I know Tintin will go on to great things because she was already doing great things,” Larson said of this graphic adventurer. •