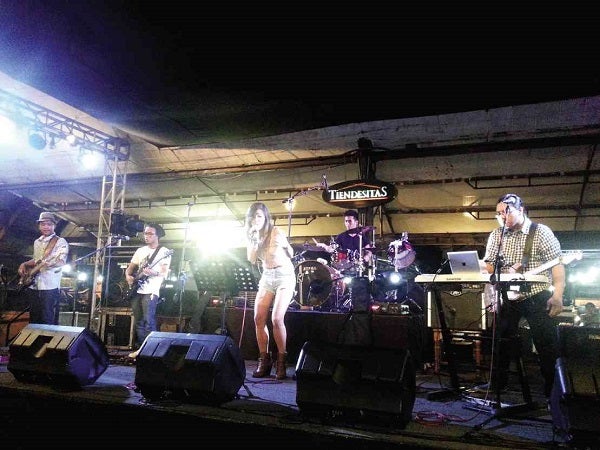 There is something else that attracts people here at night—music played live by local acts. The action happens in a food court with plain tables and chairs for tired workers itching to drink and have a good time.

In the distant past, this would’ve been called a “beer garden” surrounded by food stalls selling pulutan; indeed, this is a place for serious drinking where San Miguel Pale Pilsen or Light is ordered by buckets of six bottles each.

But the crowd that filled it last April 23 was also composed of families and young people in groups. Onstage, an attractive singer-songwriter nicknamed KA (Kristine Antonio), clad in a sequined tank top, tattered denim shorts and leather half-boots, was performing a repertoire of Top 40 covers and her own originals with a backup band.

Her versions of foreign and local hits (“Price Tag,” “Hinahanap-Hanap Kita,” “Ligaya,” among others) were fine, except that her performance was hampered by the faulty sound system—which was either of cheap quality or was just badly mixed.

Her originals, like the sad love song “Maybe,” and the teasing “Papansin,” are included in a coming EP to be released by Curve, a new record label formed by former Sony Music Philippines executives Narciso Chan and Vic Valenciano. The bosses came with their staff as a show of support for KA, one of Curve’s newly signed artists. Valenciano was with his wife and kids.

KA, 26, is a familiar sight on TV because she happens to be a VJ on MYX which airs on the ABS-CBN channel Studio 23. A graduate of Early Childhood Education at De La Salle University, she has a day job as a preschool teacher.

Back in college she was the lead singer in the band Ajka, which won the Nestlé “Soundskool” talent search a few years ago.

“I’m really a fan girl of bands,” she told Inquirer Lifestyle during a break. “In grade school I loved listening to Parokya ni Edgar, the Eraserheads, Imago, Barbie’s Cradle, Mojofly…”

She added that she still gets together with her former band mates to jam and write songs, although her being a solo act is her priority now.

Back onstage, she exuded a charming, chick rocker appeal. We think she has lots of potential to make it to the top, if she would keep writing more songs.

But we wish she can learn to stop relying on lyric sheets during gigs, because it would seem like she’s just singing karaoke-style, in front of a big audience in a beer garden.

In contrast, the band Kilos—another act signed with Curve Records—delivered a devil-may-care performance that reminded us of the energy of punk bands here and abroad.

Formed in University of the Philippines Los Baños, the four-man group is composed of vocalist Chao Sison, guitarist Andres Villaruel, drummer Kevin Vega and bassist Dunne Mamhot. The band played an interesting set of originals including “Salamin,” “Gising Na,” “Alas Kuwatro” and “Leaves,” spiced with a few covers (“Can’t Take My Eyes Off You,” “I Saw Her Standing There”) which they rendered in fast and furious fashion.

There were moments when Sison’s vocals sounded a bit like The Cure’s Robert Smith, while the rest of the members impressed us with their dynamics and ability to rise above the mediocre sound system.

Kilos sent us reeling with delight till the very end, as Sison leapt high in the air just before finishing a cover of Orange and Lemons’ “Umuwi Ka na Baby.” We went home thinking that Kilos is one of the reasons why contemporary Pinoy music is alive and well.

The Allegro Center (2284 Chino Roces Extension, Makati) is a building complex that houses various business offices including a bank, a tutoring school, a visa application center for Australia and a computer store.

On the second floor is 121 Allegro—a restaurant by day that transforms into a music bar by night. We’ve been hearing about this place for the past few months; friends say the jazz gigs every Thursday are worth checking out.

So off we went last May 2—coincidentally the night when Akasha, a band composed of drummer Mar Dizon, saxophonist Dix Lucero, bassist Dave Harder and keyboardist Henry Katindig, was playing.

The all-instrumental music, a sophisticated kind of jazz that swings from mainstream to bebop to fusion to funky overtones, attracted a cosmopolitan crowd of foreigners and young executive types.

At certain moments, the tunes’ vibrant rhythms felt like we were hearing snatches of life in New York or London. When Lucero led the melody with his sax, it sounded like a car’s horn blowing happily at the sight of a pretty woman.

Carlos Garchitorena, who programs the gigs at 121 Allegro, has promised an eclectic lineup of performers in the coming weeks and months.