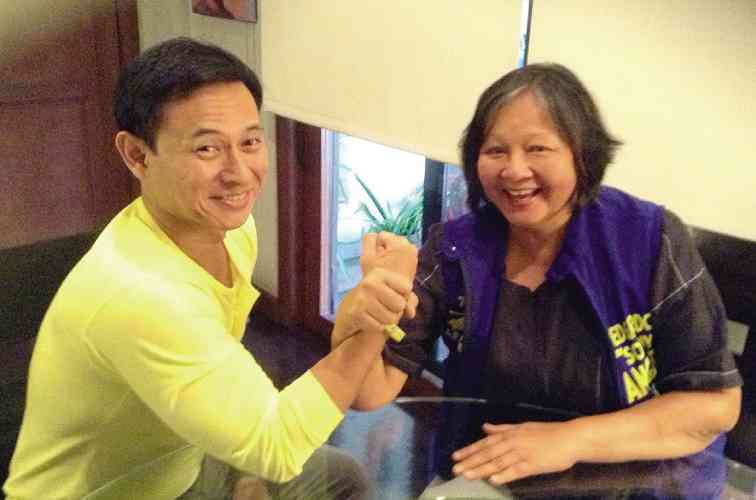 THE AUTHOR with son-in-law Sonny Angara

This morning, I got this insight as I watched  the Benguet tayao dance, where a couple dances in a circle to the beat of drums and gongs. The man raises his arms toward the heavens while the woman keeps her arms folded and low, as a bird protects her chicks.

I have felt this way toward my children during this campaign. It has been enriching and rewarding and there are times when it is challenging. I am proud when there are breakthroughs, but then I also feel the arrows thrown at him. I feel I must watch my son-in-law’s back until the finish line.

My only daughter Tootsy and Sonny Angara were married 10 years ago. When discussions on Sonny’s foray into politics were ongoing, the mothers said maybe not just yet. But when he made up his mind and my daughter agreed, I told myself I would be supportive of their pursuits.

We won that election and graduated from Congress. And we are now looking at the Senate.

This campaign has brought me on road trips covering hundreds of miles, across mountains, rolling hills, rice lands and various landscapes.

From Baguio, we took the road along the China Sea and around the Pacific Ocean and made our way to the mountain heartland and another body of water, the Chico River.

We have combed through markets and met people in high places and the streets. A group of us women, grandmothers, mothers and titas has been enlisted in support of the young, who dream of change and of a new way of doing things.

At this point, I no longer wish to take the lead. I agree with the vision of Sonny and his Team PNoy, and will lend all possible support.

That’s why I’m going all over northern Luzon to generate votes.

Sonny was born under the sign of the Rat, which is why we easily coexist, because I am one, too.

We have a rule in relating to each other: talo ang pikon.  We rib each other, with vague and not-so-vague insults and laugh about them. My latest joke is, you better be nice to me or I’m going to call a press con! And the few times there was miscommunication and tempers flared, he was quick to apologize.

When Sonny and Tootsy got engaged, friends joked me about “Meeting the Fockers,” a movie about conventional parents meeting their unconventional counterparts. Sonny’s parents were established in the mainstream, and Tootsy’s parents (meaning, my husband and I) lived sort of bohemian lifestyles.

I’ve learned it’s best to be a cool mom-in-law who would accept, welcome, and embrace the culture of the other side to the point of integrating, and finding shared values and interests like art. With their coming, the apo became the center of our universe and we stepped into the best shoes ever.

Sonny’s low-key style and protocol for him and the family have really warmed me.

First, he disdained the use of the No. 8 plate on his vehicles, a courtesy given to members of Congress. He said, “Why draw attention to us?” He won’t let family ride government-owned cars assigned for his official use. He prefers not to use his titles “congressman or representative” for unofficial stuff.

Twice, I feared for Sonny, wishing I could cast a protective net around him. First was when he was spokesperson for the prosecution during the Corona impeachment case; and second, when the President was drafting him to run for the Senate.

I worried that he might be a sacrificial lamb, as the bright ones are always targeted. When the RH bill was being debated, I agonized that he would not vote for it, but he did, and was I elated!

I am proud to say that, compared to his colleagues, Sonny has passed the most number of bills in Congress, landmark bills on education and the Magna Carta of Women. I have followed his work from a distance, perched on my mountain in Baguio, many times cheering silently. And when I see him at home or with family, I don’t talk shop, unless he does. I am aware a thinker needs a lot of space.

Up close, I have seen Sonny very protective of his family and their privacy. He has given my daughter the security of a family she didn’t have with her separated parents. He holds the family but doesn’t wield power.

He is secure and is supportive of my daughter’s career paths. He is a friend and is playful to the kids, but disciplines them with a soft hand. He is liberal in thought and deed. In crisis, he is cool as a cat.

When my daughter underwent a major neurosurgery to remove a tumor at the base of her brain after giving birth to their third child, he took the reins as Mr. Mom and was the rock of the family until the crisis blew over.

I know Sonny can be counted on, which is why I am on this long road trip. Like the Benguet lady I am dancing to the beat of the drums and the gongs and spreading my wings, I’m looking out for my young.

Baboo Mondoñedo is author of “Stepping Stones,” a collection of personal essays published by University of Santo Tomas Press.