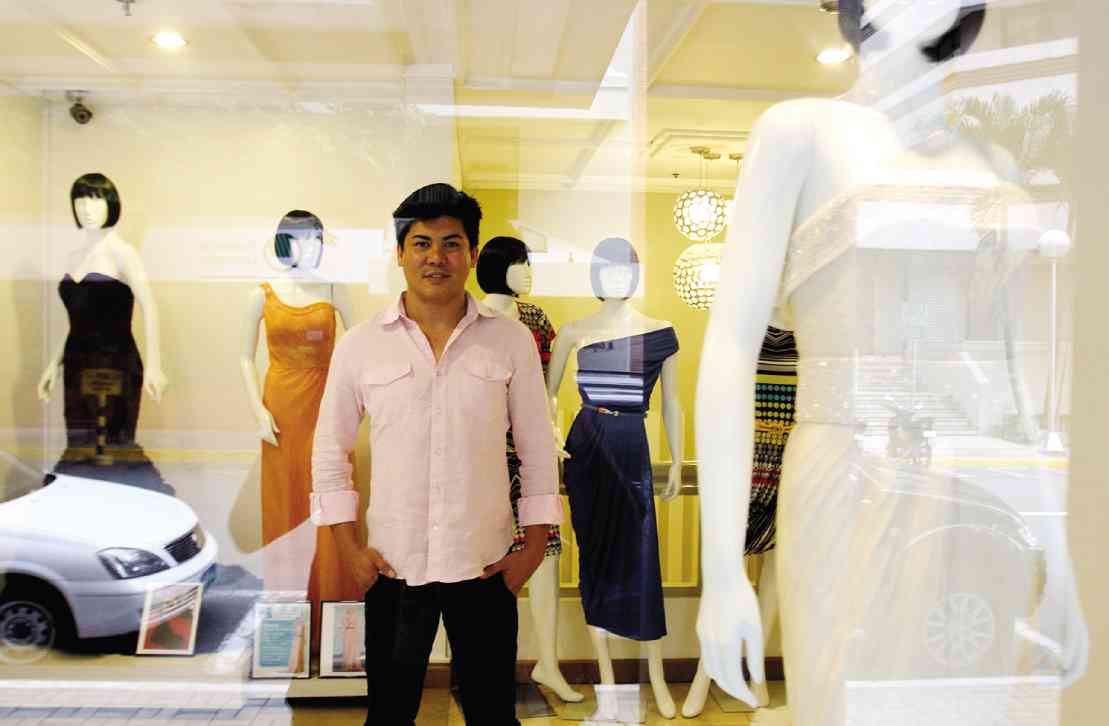 The peach piña dress Carrie Underwood wore last month on an “American Idol” performance, alongside a decidedly more elaborate purple organza serpentine gown made for actress Gloria Reuben (“Lincoln”) for the 2013 Oscar Awards, greet guests at the foyer of Oliver Tolentino’s atelier in a Makati high-rise.

In the basement workshop-showroom are neat racks of the designer’s current collection of day dresses, as well as long rows of ornate evening gowns, zipped in their respective garment bags, all ready to ship to West Hollywood, to Tolentino’s boutique on Melrose Avenue.

A bright green ’50s-style dress is draped on a mannequin on one side of the room; beneath it is a magazine image clipping of the actress-singer Emmy Rossum, who wore the dress to “The View” in January.

The Filipino designer has dressed dozens and dozens of Hollywood celebrities in the four years since he set up shop in Tinseltown. A mantle in the Makati shop has framed images of Fergie of Black Eyed Peas, actresses Olivia Munn and Anna Paquin, TV hosts Giuliana Rancic and Maria Menounos.

The irony is that, even after two decades of being in fashion, not many of his compatriots have heard of Oliver Tolentino until he left the Philippines in 2009.

“People didn’t know who I was here because I was doing my business quietly,” says Tolentino. The designer is in town until next week for his twice-a-year visit to attend to his Philippine clients.

“I wasn’t from Manila, and I didn’t have connections. I didn’t apprentice with anyone. Wala ako noon sa social scene. Maybe mahiyain lang ako, or I was just too focused. Hindi ako naiimbita sa shows before, though I did a few shows in Philippine Fashion Week.”

After years of doing good business even sans the media attention being showered upon his contemporaries like Rajo Laurel and Patrice Ramos Diaz, the Bataan-born Tolentino decided to take the risk and fulfill his lifelong dream to conquer America.

“I wasn’t getting noticed here,” he recalls matter-of-factly, “so I thought maybe the US will open doors for me.”

The timing, however, couldn’t have been worse: the US was in the middle of a deep recession, and clothing shops and wedding boutiques were closing left and right on tony Melrose Avenue in Los Angeles, where he and American partner Andrew Caruthers, the company’s president and chief executive, chose to set up shop.

“I’m a fighter,” Tolentino says. “If you don’t take risks, how will you know that you can conquer something? Kailangan sa fashion, aggressive ka. ’Wag kang papatalo sa intriga,” he says, adding he had many doubters when they learned of his plan.

Tolentino’s reward came much sooner than even he ever hoped. Two weeks after his Melrose boutique opened, he got a call from the organizers of LA Fashion Week, who invited him to show; they liked what they saw on his shop window. Soon after came the celebrity red carpets.

“It wasn’t easy, but I was so lucky,” he says now. “Back there, if your clothes are bad, even if you’re a big-name designer, they won’t wind up in a magazine. If it’s ugly, they’ll say it. What celebrities hate the most is to end up in the worst-dressed list. If one actress has already worn a dress, I make sure it doesn’t get worn again by another actress, out of respect. I’m happy I haven’t received a bad review. And now they pronounce my last name correctly.”

Tolentino has also taken on a mission to promote Philippine fabrics—piña, abaca, saluyot and water lily—and he and Caruthers have been working closely with the weavers of Aklan to develop new wefts and weaves. His Spring-Summer 2014 collection will also feature the embroidery of Lumban.

“My US clients love the clothes but they don’t know the story. That’s what I’m trying to do, to tell the story,” Tolentino says.

“What Carrie Underwood wore to  ‘AI,’ even the stylist didn’t know that it was 100-percent eco-friendly. ’Pag nag-uusap ang mga designers at stylists dun, ang eco sa kanila basta pure cotton, pure silk. For me, the real eco are the fabrics you get from a plant like piña and abaca. I went to Aklan to learn how they make piña. They don’t use chemicals. The water they use is not turned to waste. I tell the weavers not to mix synthetic fibers in the weave, no rayon or polyester. I’ll be making wearable everyday dresses out of them.”

He also designed the costumes for one Ceelo Green music video using only piña and abaca.

“To be clear, he’s not 100-percent eco,” says Caruthers, “but he’s making a big push for the Philippine fabrics because he’s proud. He’s doing interesting things with them. He pushes it out of patriotic pride.”

Caruthers says positioning the Oliver Tolentino brand as eco-friendly can both be good and bad for the business.

“It can’t be good from a business standpoint because it’s very expensive and time-consuming,” says the businessman. “Oliver could just as easily ignore these fabrics and use other things… But it can also be good business in the sense that it’s eco. That’s a very hot subject right now. [His clients] want to do good for the world. The great thing about this piña, it’s really eco. Bamboo is not. They use so many chemicals, too much water. The piña process is very eco. And it supports hundreds of families. Oliver wants these Filipino crafts to live on for many, many years to come.”

Tolentino has a staff of 35 in the Philippines, and three local-hire Fil-Ams in the US. The youngest of four children, he enrolled at Slim’s to study fashion design and dressmaking right out of high school in 1988, and later at Fashion Institute of the Phils. to learn pattern-making, to the surprise of his parents.

His mother thought he would become an architect or an engineer like his father. As a compromise, he studied advertising at Maryknoll (now Miriam College), but continued to make clothes for his classmates, from one sewing machine given by his mother. His earnings paid in part for his studies.

After graduation, he set up shop in Valle Verde in Pasig, and later moved to San Antonio Village in Makati. He made clothes for singers Kuh Ledesma and Lani Misalucha, though publicity was little to nil.

While the Hollywood red carpet and the exposure in magazines get him mileage, Tolentino says his bread and butter remains to be his bridal business. He comes to Manila in April-May, when it’s low season for weddings in the US, to meet with his Filipino brides for the ’ber months, and also in October-November. He regularly conducts Skype meetings with his Filipino clients.

“I personally fit my brides,” says the designer. “My big rule is, I deliver on time; a month before the wedding, it’s done. If you lose or gain weight, we repair a week before. I don’t want my brides to get rattled. I don’t overbook myself. They book you months ahead, so you can’t not deliver on time. When I was younger, I would accept and accept and I’d have problems with delivery. I was just excited to have a lot of clients. As you grow older and wiser, you learn to say no. If you’re my bride, I’m going to be the least of your problems.”

“I don’t choose clients or specific body types,” he says, adding with a laugh, “I’m not a bitchy designer, I’m very approachable. I want Filipinos to know that I may be there [in the US] but my heart is still here.”

“All Filipinos should be proud of what Oliver has done in four years,” says Caruthers. “These designers in LA dream of having a shop and Oliver has two in two countries. The money involved in running a shop is very expensive, so most young designers can sketch, draw, make limited collections, but they have nowhere to sell it. Their whole life is a trunk show. Oliver is in a great position… Things have happened for him.”

Tolentino has no bitterness toward his naysayers from years ago. His mother, who died in 2000, is the voice of reason in his head, and the perpetual inspiration to his work.

“Nung hindi pa ako nakikilala, nakikinig ako sa mother ko, who told me to be patient and wait. Sabi nya, mag-aral kang mabuti, hone your talent, para respetuhin ka… It’s not right to compare designers; we have different ways of creating clothes. I don’t criticize my colleagues even when people ask for my opinion. I respect them. I don’t take negative comments seriously because I don’t want them to be a hindrance to my work.”

“I hope people will discover new, extraordinary talents because you never know, maybe from a small town in the province, there will be another Oliver Tolentino,” he adds.

So, does he now have friends in the industry?