Why it’s better to jam than to ‘sing-along’ | Lifestyle.INQ ❮ ❯ 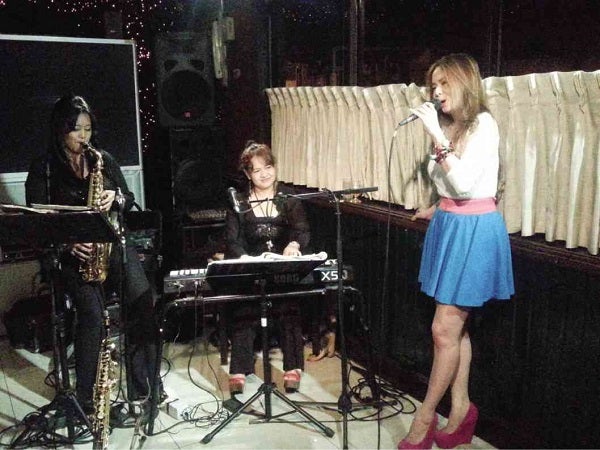 Why it’s better to jam than to ‘sing-along’

On three separate occasions last week we had a swell time checking out the nightlife in Quezon City’s Tomas Morato-Timog Avenue strip and its vicinity.

A few meters off Morato is the Star Tavern, a restaurant in the Stonehouse Bed & Breakfast Apartelle (1315 E. Rodriguez Avenue) that features solo singers with a pianist nightly. On Mondays it showcases guest performers like the female duo Marmalade—composed of singer-keyboardist Creole and saxophonist Maryana.

Originally a quartet, Maryana’s members occasionally do stints in hotels and other venues abroad. We remember Maryana from the early years just before the Filipino alternative rock scene hit the mainstream in the 1990s, when she played sax with the band Skavengers, on the prodding of her then boyfriend and the manager of Alamid, Color It Red and Siakol, the late Dodong Viray.

Maryana has improved quite a lot since then, as evidenced by her confident, lively solos notably on Chuck Mangione’s “Feels So Good.”

Creole, meanwhile, revealed a wacky sense of humor even as she tried singing a tamer version of the Minnie Ripperton soul classic, “Lovin’ You.”

But what made Marmalade’s set more interesting that night was when members of the audience were called to jam onstage. Some of them were the duo’s friends who took turns singing standards (“The Way You Look Tonight,” “Girl From Ipanema”); a guy even played harmonica on “Summertime.”

Two other guests, seated far from the stage, gamely obliged: Alynna, the singer otherwise known for her naughtily titled tunes (“Kahit Gaano Kalaki,” “Ahh… Ano Ba Yan?”) showed her true inclinations via the 1956 hit “You Don’t Know Me” and Sade’s “Smooth Operator”; Ronnie Quizon, who was relaxing after an all-night taping for a TV series, sang “The Long and Winding Road.”

Formerly called Patio Carlito where show-biz events used to be held, Seafood Island gives credence to its new name with an interesting menu of fish and other dishes. On the Tuesday night we visited, friends ordered Tilapia Balls—the meat of the fish deboned and rolled into oversize fishballs. Dipped in sweet and sour sauce, it went well with San Miguel Light beer.

But the main attraction was a singing lawyer, Lorenzo “Larry” Gadon, accompanied on keyboards by Allan Lagasca. Gadon’s regular audience, we were told, is composed of fellow lawyers, doctors and other middle-age professionals unwinding after a hard day’s work.

The performance had a casual air, apparently since most of the repertoire, “Of All the Things” and “She,” for instance, were pop standards perfect for mellowing out.

Gadon proceeded to call out anyone interested to jam. Among those who immediately responded: ophthalmologist Noel Jusay Lacsamana, whose choice of song, “Me and Mrs. Jones,” was a rarity nowadays; and a teenage kid who sang “Imagine”—which caught our attention because we thought the singer was too young to be aware of such a peace anthem as the John Lennon masterpiece.

More people in the audience stepped up to sing a variety of oldies: the Basil Valdez hits “You” and “Ngayon at Kailanman”; the oft-covered “The Way You Look Tonight”; and more ballads like “One in a Million You.”

Not everyone who jammed was in perfect pitch or tune, but never did we think that trouble would erupt—unlike in a sing-along bar where a wayward rendition of “My Way” is enough to create a deadly situation. We don’t really know why, but perhaps the reality of flubbing a song with live music would just elicit laughter from a fun-loving audience, while messing around with a karaoke machine could ignite a murderous fuse among drunkards.

Back on Morato Avenue, a street party was in full swing around 9 p.m. outside the premises of Space—a dance club that was packed inside with young revelers. The party was in celebration of FM radio station Wave 891’s 12th anniversary.

Station manager Garry Caoili, DJ Pam Ylagan and other jocks were on hand to greet the audience and assist in the show which presented a roster of local acts identified with R&B/hip-hop, the music genre that the station specializes: Marcus and Amber Davis, Q-York, Thyro and Yumi, Ken Johns, Pow Chavez, Flip Music talents, Roxee B, Pino G., Urbanation and Jay-R.

We were waiting for Jay Durias to perform, but it turned out that he was last in the lineup. So we proceeded to Gerry’s Grill beside Space to have a few beers.

The band’s short five-song set was the only performance that drew loud cheers, apparently since Durias’ compositions (“Love of My Life,” “Rainbow,” “Kahit Kailan”) were big hits, aside from the exceptional playing of the musicians.

Durias was also there to invite the public to listen to his radio show on Wave, “Rock-A-By-JD,” which airs Wednesdays, 8:15-9 p.m. The show will feature Durias performing song requests sent via Twitter @jaydurias and his Facebook fan page Jay Durias.

We wish he can have time to write and record more new songs.