Is this US-based Filipina gymnast bound for the Olympics? | Inquirer Lifestyle ❮ ❯ 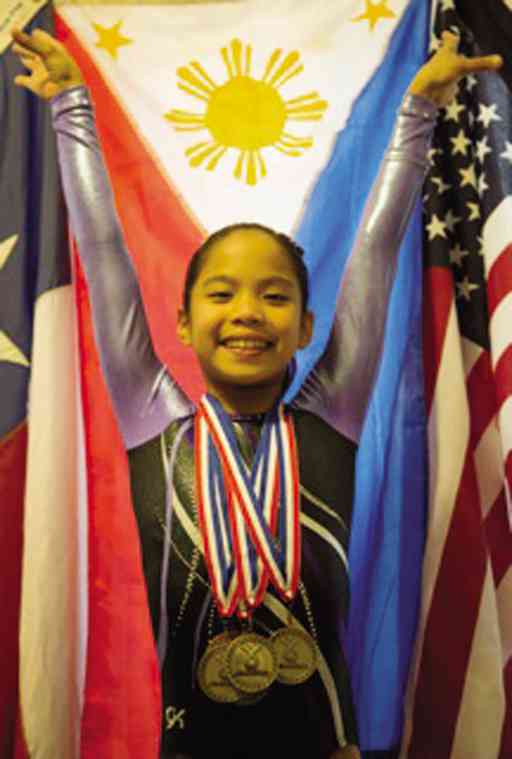 Is this US-based Filipina gymnast bound for the Olympics?

Coaches Gina Quinlan and Marine Futch think that the 12-year-old Filipina is on track to make it to the elite level, and perhaps even the Olympics.

De Guzman is among the top five gymnasts in the United States, according to Quinlan, who has trained gymnasts for the state, regional and national championships.

“Her level of coordination is well above average, which helps her in all the events,” Quinlan said. “She is graceful and has beautiful form and lines. She learns at a much faster rate than most gymnasts.”

De Guzman’s potential became apparent last March 15 when the gymnast gave her most impressive performance yet and became the Jr. A Level 9 Texas State All-Around Champion. She was also adjudged Bars and Beam State Champion.

Quinlan claimed that Texas is one of the most competitive states in the region, with the Texas State Championships “probably being the most difficult meet to win any of the state championships in the country.”

Last month, De Guzman placed first in the Kurt Thomas Invitational ROV, an award given to a gymnast who displays outstanding risk, originality and virtuosity.

Quinlan is helping the energetic girl raise her mental game. “The focus right now is to continue her skill development, and to train her at a pace that works best for her both physically and mentally. We are taking things one step at a time—with her goals in mind.”

Learning to acknowledge the mental aspects of her sport is important. This can be as basic as recognizing tiredness and off days. “She is mentally tough. She is a perfectionist and is very hard on herself, which can be both good and bad.”

De Guzman trains six hours a day. The physical aspect of the sport is ingrained in her, but beyond that, the coaches see more. “She is strong, flexible, graceful and powerful. These rarely come in one package.”

De Guzman’s talents didn’t come in a single package. She comes from a family of gifted athletes at home now in Dallas, Texas.

Her mother Tammy was the No. 1 ranked gymnast in the Philippines in her time; she is a four-time gold and silver medalist at the Southeast Asian Games. Father Lauro is a former water polo athlete, and brother Mikey is not to be outshone. On his Level 6 category, he has placed fourth all-around, third in pommel, third in high bar and second with his team. He is also into competitive swimming.

Tammy said she decided to become a gymnast after seeing Bea Lucero on TV at age 11. Lucero won two gold medals and three silver medals at the 1987 Southeast Asian Games for gymnastics. In 1992, she got a bronze model at the 1992 Olympics for a different sport: taekwondo.

Earning her gold medal in the 1995 Southeast Asian Games, Tammy could have also represented the Philippines at the Olympics, but the Philippine government reportedly lacked the funds to support her.

Lack of funds has also driven many great Philippine coaches overseas, especially Singapore, according to Tammy. She thinks the Philippine government should do more to develop the country’s gymnastics program.

She came to the United States in 2009 on an O visa, which is given to immigrants with extraordinary abilities.

Today, Tammy is a USAG-certified coach in the elite level as well as other levels at Metroplex in Dallas, Texas—the same gym where Quinlan and Futch prepare De Guzman and other gymnasts for professional competition.

Tammy said the idea of becoming a gymnast came from De Guzman, who asked to be enrolled in a gym class when she was only 3 years old, back in the Philippines.

For Tammy, whose parents didn’t initially approve of her career as a gymnast and who didn’t get a chance to compete in the Olympics, De Guzman will be ready in 2016, when fulfilling her dream is going to be about fulfilling her mom’s dream, too, no matter what flag she ends up waving, and whether she wins or not.

What are De Guzman’s chances of making it to the Olympics?

Based on these scores, Quinlan thinks the petite girl can still improve on the “power events”—the floor and vault. “It will take some time to develop. Bars and beam are probably her best events at this time.”

“She will need to keep her determination in check, so she doesn’t bring herself down,” she said. When you’re young and impressionable, losing could be hard to take. It can be heartbreaking.

But De Guzman doesn’t need to worry about that. She has the other, more personal coach looking after her—her mom.

“Tammy is effective in coaching Kaitlin, because she was a high-level gymnast herself. She understands the sport from an athlete’s perspective,” Quinlan said.

Tammy also happens to be a doting mother who knows what winning means to her daughter. She recalls the time De Guzman received the honorary “Youngest Gymnast of the Meet” title years ago. She saw how disappointed De Guzman was when she didn’t receive a medal and she didn’t have her turn at the podium, not knowing she was not yet in a professional competition.

But if she makes it to the Olympics in 2016, De Guzman will certainly have her chance to win gold.