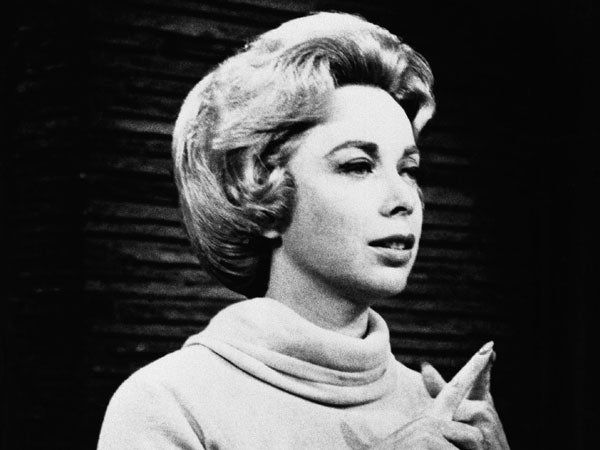 This undated file photo shows Dr. Joyce Brothers in the studio of her direct line radio show. Brothers saved a would-be suicide in 1968. The popular psychologist, columnist, and television and film personality has died in New York City on Monday, May 13, 2013. She was 85. AP Photo

Joyce Brothers, the pop psychologist who pioneered the television advice show in the 1950s and enjoyed a long and prolific career as a syndicated columnist, author, and television and film personality, has died. She was 85.

Brothers first gained fame on a game show and went on to publish 15 books and make cameo appearances on popular shows including “Happy Days” and “The Simpsons.” She visited Johnny Carson on “The Tonight Show” nearly 100 times.

The way Brothers liked to tell it, her multimedia career came about “because we were hungry.”

It was 1955. Her husband, Milton Brothers, was still in medical school and Brothers had just given up her teaching positions at Hunter College and Columbia University to be home with her newborn, firmly believing a child’s development depended on it.

But the young family found itself struggling on her husband’s residency income. So Brothers came up with the idea of entering a television quiz show as a contestant.

“The $64,000 Question” quizzed contestants in their chosen area of expertise. She memorized 20 volumes of a boxing encyclopedia — and, with that as her subject, became the only woman and the second person to ever win the show’s top prize.

Brothers tried her luck again on the superseding “$64,000 Challenge,” answering each question correctly and earning the dubious distinction as one of the biggest winners in the history of television quiz shows. She later denied any knowledge of cheating, and during a 1959 hearing in the quiz show scandal, a producer exonerated her of involvement.

Her celebrity opened up doors. In 1956, she became co-host of “Sports Showcast” and frequently appeared on talk shows.

Two years later, NBC offered her a trial on an afternoon television program in which she advised on love, marriage, sex and child-rearing. Its success led to a nationally telecast program, and subsequent late-night shows that addressed such taboo subjects as menopause, frigidity, impotence and sexual enjoyment.

She also dispensed advice on several phone-in radio programs, sometimes going live. She was criticized by some for giving out advice without knowing her callers’ histories. But Brothers responded that she was not practicing therapy on the air and that she advised callers to seek professional help when needed.

Despite criticism of the format, the call-in show took off, and by 1985, the Association of Media Psychologists was created to monitor for abuses.

Other celebrities, including Paris Hilton, rapper Common and motivational guru Tony Robbins, posted bits of Brothers’ advice on Twitter, such as: “The best proof of love is trust.”

For almost four decades, Brothers was a columnist for Good Housekeeping. She also wrote a daily syndicated advice column that appeared in more than 350 newspapers. Briefly, in 1961, she was host of her own television program.

She was also an advocate for women. In the 1970s, Brothers called for changing textbooks to remove sexist bias, noting that nonsexist cultures tend to be less warlike.

The quiz show scandal of 1958-59 was one of the biggest scandals in the history of television. It erupted in 1958 when it was revealed that quiz show producers had been rigging the outcome of some shows, including “The $64,000 Question,” by giving favored contestants the answers in advance.

Brothers was one of a number of big winners who told an Associated Press survey in November 1959 that they knew nothing of any cheating.

At a House hearing that month, associate producer Mort Koplin also said Brothers was among those not involved in cheating. But he also described how contestants, who were carefully interviewed in advance, could be affected unknowingly as producers tried to manipulate the outcome of shows by tailoring questions to benefit favored ones and oust less-favored ones.

According to the testimony, Brothers applied to be a “64,000 Question” contestant as an expert in home economics and psychology. The producers, looking for an audience-pleasing oddity, suggested the pretty young woman try boxing as her specialty. She learned the subject so well, Koplin said, she kept on winning even after the producers “threw the book” at her with tough questions aimed at eliminating her.

Born Joyce Diane Bauer in New York, Brothers earned her bachelor’s degree from Cornell University and a Ph.D. in psychology from Columbia.

She wrote numerous advice books, including “Ten Days To A Successful Memory” (1964), “Positive Plus: The Practical Plan for Liking Yourself Better” (1995) and “Widowed” (1992), a guide to dealing with grief written after the death of her husband in 1990.