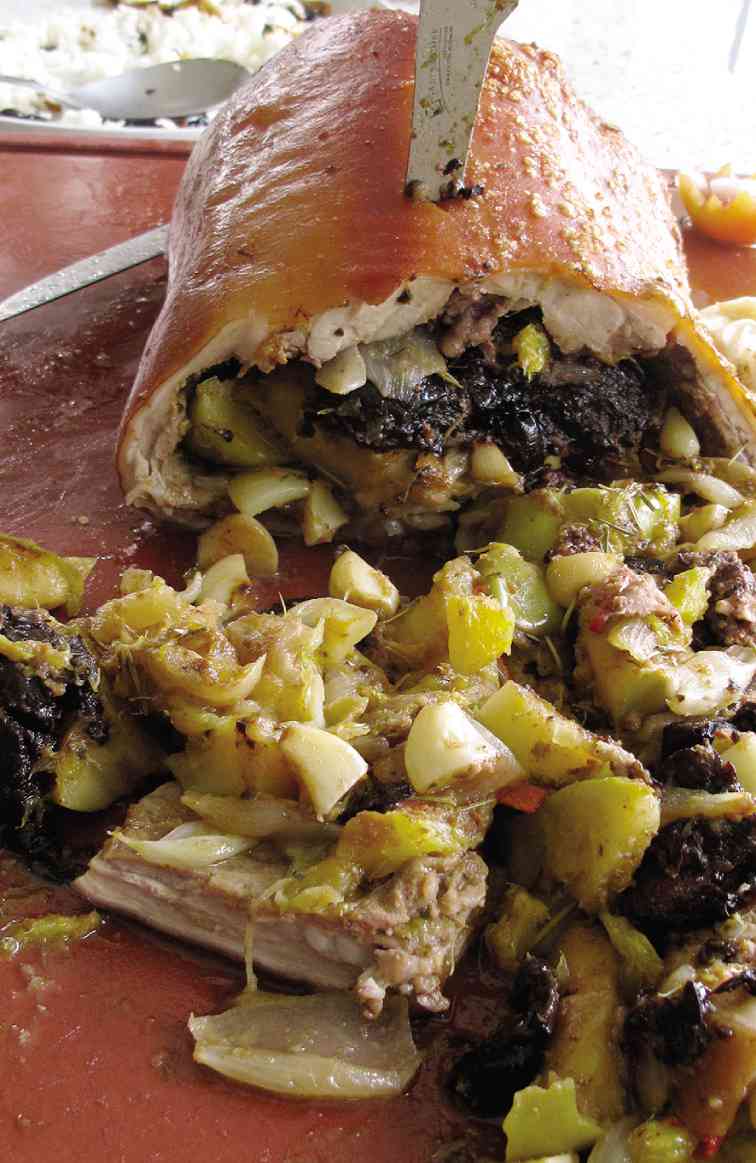 My family allowed me to sit back, relax and enjoy Mother’s Day. Instead of the usual me in the kitchen, I called a good friend, Greek chef Anthony Kouroutsavouris to prepare an authentic Grecian feast for us.

The chef happily obliged and presented a menu that was reflective of his culinary heritage yet, at the same time, food that everyone would appreciate.

We had some of Greece’s most popular dishes such as Greek salad, a delectable leek pie made with graviera cheese and crisp phyllo pastry, vegetarian moussaka and vegetarian pasticcio (both were very good but, up to now, I am still wondering why he opted to make the vegetarian version! I would have loved the meat version of it so much more!).

According to Kouroutsavouris, the dish was his attempt to marry Philippine culture with Greek cuisine. I must say that his attempt was a tasty success, the flavors so foreign yet so familiar.

The pig was boneless, headless and tailless. The chef said part of the secret was in the deboning technique that only butchers and really experienced cooks are able to do.

The pork was stuffed with an assortment of  fruits—apples and prunes, herbs and a blend of spices. The fruit mixture, aside from lending a unique taste, helped make the meat not just flavorful but juicy as well.

The gourounopoulo was served with a sauce that is to die for. Made from the bones of the suckling pig combined with mixed herbs, the sauce tasted simple yet deep and well-rounded. The sauce took forever to make—longer, in fact, than the roast pig. Chef Anthony arrived at 8 a.m. and finished simmering it at half past 12 noon, just before lunch was served.

According to him, since the bones add more flavor to the meat, making use of them for the sauce helps make the flavors and the dish come together in perfect harmony.

The chef also made a citrus-perfumed rice with almonds and raisins to complement the slow-roasted pork, which crackled on the outside and was perfectly seasoned, tender and juicy on the inside.

With spoons full of sauce over the pork and the rice, every bite we had was simply divine. The combination was dynamite. Chef Anthony was right when he told me that once I tried his lechon, it would be a moment to remember.

To cap our Mother’s Day lunch, we had Ekmek, a dessert made with kataifi (shredded phyllo soaked in syrup), topped with rich custard and cream, and sprinkled with pistachio nuts and cherries. We all asked for half a slice, but went back for seconds and thirds.

Here, Chef Anthony shares his moussaka recipe—a Mother’s Day gift from him to you!

3.      Brush the bottom of a 9 x 13-in baking dish with olive oil and sprinkle with breadcrumbs.

4.      Layer the vegetables; start with potatoes on the bottom of the pan, then eggplants and zucchini.

5.      Top the vegetables with the meat sauce and a thick layer of béchamel.

6.      Sprinkle with cheese and small cubes of butter.

3.      Add the meat and cook in high heat until juice has evaporated.

5.      Add the tomatoes, tomato paste, chili, carrot, salt and pepper and then sugar.

6.      Simmer until the mixture has reduced and the sauce thickened.

1.      Pour the milk in a pot with the onion and boil with bay leaves and peppercorns.

6.      Turn on flame and stir slowly until mixture bubbles.

8.      Add all the milk, stir and turn on the flame, whisking continuously until the béchamel thickens.

10.  Turn off the flame and add a handful of grated cheese.