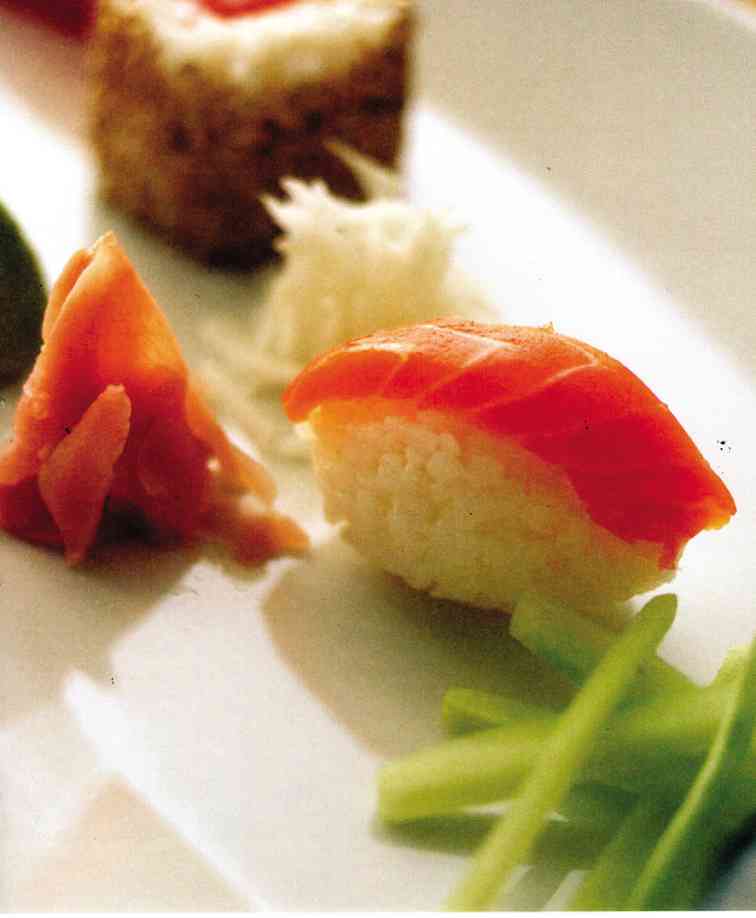 SALMON from Norway was introduced into the Japanese sushi menu.

It was years ago in Iloilo when I learned about how Norway and the Philippines were connected. It was at a resort where we ate the specialties of the province. On the beach, instead of swimmers, were a group of lifesavers. It was explained that those were students at John B. Lacson Maritime School, and the school was in partnership with Norway’s maritime industry.

I never forgot the connection. And so last week, there were several Norwegians at lunch, especially Capt. Ivar Thomasli, president of Philippines Norway Business Council, who said he was part of the board of the school.

But we were not to talk about merchant marines but of Norway seafood which has been growing in sales here, 41 percent in the past five years. And to have a taste of those at I’m Angus (Yakal Street, tel. 8403771), quite an unusual venue for a seafood lunch.

Cooking was this young Norwegian chef, Adrian Løvold, who will be doing his dishes until May 18.

Smoked salmon seems a given for a festival of Norway cooking. It was the first course served with apple, cucumbers and tapioca, made to look like caviar by adding soya for that touch of black. I thought that was clever. Certainly cheaper than the real thing.

Norway shrimps were placed on toast for the second course with a horseradish mayonnaise and topped with tiny red fish eggs or caviar that was called løyrom. The Norwegians were stumped for a while when asked what fish the caviar comes from. Out came an iPhone and it turned out that the eggs are from a common white fish called sik. My bit of research revealed the scientific name, Coregonus lavaretus.

While eating pan-fried king crab in cauliflower cream, Lena Mari Steffensen of the Norwegian Seafood Council told the story of how king crab was introduced into Norway’s Barent Sea by Soviet scientists in the 1960s.

The crab is one of the country’s important products today. But because it was not indigenous to its waters, there have been studies conducted to determine the impact on the ecosystem.

Though not introduced into Japanese waters, salmon was introduced to the sushi menu and consequently changed Japanese cuisine.

Chef Adrian Løvold served salmon again, this time grilled, served with a brown butter emulsion, fennel seeds and asparagus. While taking part of this valued fish, we talked about how the Norwegians do the fish back home. Most of them like it grilled, seasoned with just salt and pepper, eaten with potatoes and sour cream. It was a time to share their comfort food—yes, always fish like salmon, cod and trout. But always the potatoes have to be there.

When the chef presented his dessert, it had mangoes (a Philippine contribution) with yoghurt, caramelized hazelnuts, sea salt and a sorbet of herbs such as coriander leaves. Quite refreshing.

White wines naturally fit into seafood pairing. We had Chateau Bonnet Blanc 2010, mostly made of sauvignon blanc, and a Sancere Les Fondettes Blanc 2012 which is pure sauvignon blanc. But the red wine, Pinot Noir Gran Reserva Queulat 2011 from Chile, proved great with salmon.

Løvold, at 26, has worked with the best chefs. He was a stage (unpaid intern) at The French Laundry of Thomas Keller. Mostly, he cooked for fellow Norwegians. There was Eyvind Hellstrøm, previously of Bagatelle in Oslo, whose book I rediscovered when I arranged my library featuring his way with seafood, heavily influenced by French chefs.

Løvold also worked for previous winners of Bocuse d’ Or— Odd Ival Solvold (bronze, 1997) and Mathias Dahigren (gold, 1997). He was the commis to Geir Skeie, when she competed and won the gold medal in 2009.

That is probably why Løvold intends to compete in the 2015 Bocuse d’ Or, this time as the main chef. The international live cooking competition was founded by Paul Bocuse. And the first Filipino to judge there was Glenda Barretto.

Knut-are S. Okstad, Counsellor of the Royal Norwegian Embassy, represented his ambassador, whose message to us at lunch was to remember that food is culture.

The Norwegian community will be celebrating Constitution Day on May 17, their independence day. How great that they have a Norwegian chef to make the celebration even better. Of course the drinking will be present with lots of skol (toast). We were served Linie Aquavit. It is a drink made from potatoes flavored with spices like anise, caraway and herbs like fennel and coriander.

It is unique because it is placed in casks, then put on board ships that sail from Norway to other countries, going south of the equator then back to Norway, passing through the equator again. It is an unusual process, taking four and a half months, the liquid moving with the waves and flavored with some of that salt air, to produce a unique aquavit.

As we drank our shot of Linie, it was a chance for me to tell Okstad about this drinking song, also with a lot of skol, that the German nuns taught us, about a sailor with a girl in every port. Why nuns would teach impressionable girls such a song and why I remember it after all these years is a mystery.