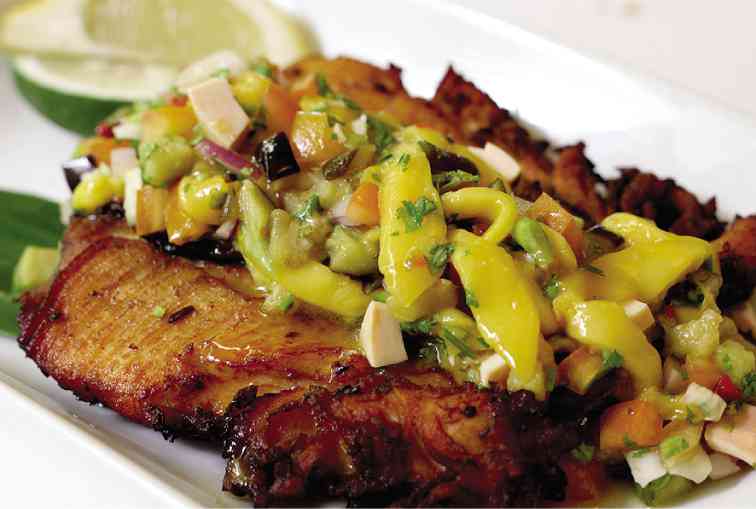 The idea to open a restaurant in Makati serving Filipino food came about after the owners wondered why Filipino restaurants that open abroad are always greeted with much fanfare.

“I’ve always wanted to push Filipino food, but many of the restaurants that offer Filipino fare here are of the carinderia-type, offering very basic dishes that keep well, and can be reheated and served on succeeding days,” said Sandee Siytangco-Masigan, vice president of Advent Manila Hospitality Group, Inc.

“We didn’t want to go the same route; Filipino food needs to grow up,” she said.

So when she and her husband Andrew opened XO 46 a couple of years ago, they decided on a menu that featured mainly heritage dishes. This meant preparing Sopa de Mariscos (seafood soup) from scratch, and using only the freshest seafood available.

“Although we initially intended to serve only heritage dishes, we tweaked some of them a bit. Some examples include our Sinigang na Lechon Kawali (crisp fried pork in sour vegetable broth), and the Pinaasim na Tilapyang Malutong (crisp fried whole tilapia topped with bean sprouts, coconut strips and herbs),” Masigan said.

Even the restaurant’s version of sisig has since been updated and “sanitized” after their daughter freaked out when she found out it was traditionally made of chopped pig cheeks, snout and entrails. Now, the sisig is made with lechon kawali.

First-timers might be confused by the establishment’s two entrances but really need not be as the dining area is simply divided into two. XO 46 New Visayan Room serves Visayan comfort food “prepared with Filipino flair” while XO 46 Filipino Bistro has heritage dishes prepared the old-fashioned way.

Guests seated in either area can simply cross-order, which is exactly what we did.

From the Visayan Room we ordered the Dumaguete Express and the Fabada Crispy Pata. The first is their take on the popular Bicol Express which is made of copious amounts of fiery chilies with a bit of pork. Dumaguete Express consists of fresh seafood (lapu-lapu, mussels, shrimps and squid) cooked in a spicy coconut sauce. It was the hands-down favorite that afternoon.

The Fabada Crispy Pata, crisp pork trotters on top of a stew of beans and chorizo, is described as “the ultimate hacienda feast for family and friends.” It was true to its word and more, however we were too full to try more than a few forkfuls.

Masigan said that unlike other Filipino restaurants that have no qualms about reheating food prepared one or two days ago and serving it to customers, all of the dishes at XO 46 are made fresh upon ordering.

They must be doing something right because even on a Monday—usually the slowest day of the week for restaurants—the place was full of patrons, many of them regulars.

“This year, we want to focus on growing the business through our catering service which can handle parties of 30 people and up,” Masigan said.

“We also want to push our ‘party plates’ to those who work in the area and want to bring home ready-cooked food. They only need to call in their orders by noon so they can pick them up later in the day.”

She said that for their upcoming anniversary (May 25), she plans to begin collecting family recipes that people can upload on the restaurant’s Facebook page.

“We will try them out and if they’re really good, we might include them in the menu. By next year, I hope to come out with a small cookbook,” Masigan said.