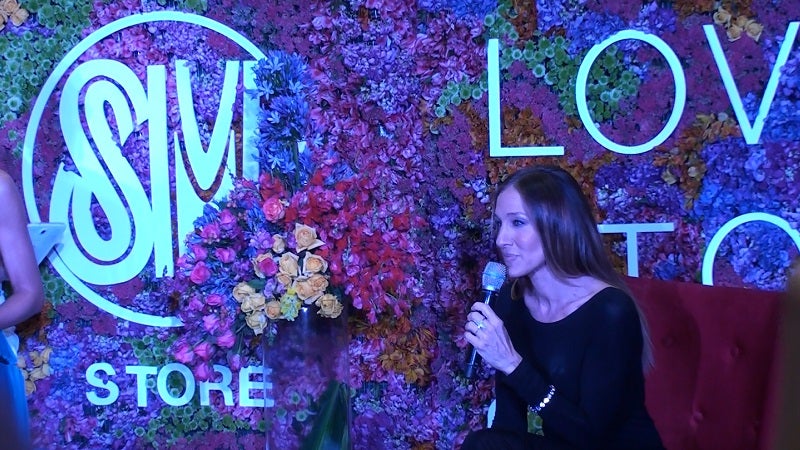 Sarah Jessica Parker, the lead character in “Sex and the City,” graces the opening of the SM Aura Premier in Global City in Taguig on Thursday, May 16, 2013. The fashion icon talks about her real self and the fictional Carrie Bradshaw that she portrayed in the drama series, among others. Video by RYAN LEAGOGO/INQUIRER.net

If fans were charmed by the fictional Carrie Bradshaw, the lead character in the drama series “Sex and the City,” the actress who portrayed the New York newspaper columnist and fashionista was just as charmed with Manila on her first visit to the country this week.

Sarah Jessica Parker vowed to come back to the Philippines, saying she found Manila “exciting and interesting.”

“I’ve heard about the beautiful beaches, but I love the city, too. Maybe you don’t see how interesting it is because you’re always here, but I think it’s exciting,” Parker, the celebrity guest at the opening of SM Aura Premier, the retail giant’s new luxe destination in Taguig, told the Inquirer. “I don’t mind the heat because New York is hot, too, though we cannot compete with this.”

She said she loved Manila’s traffic, too.

The actress, stunning in a sleek sheer black dress, her golden-streaked brown hair parted in the middle, said dressing up for such events as the SM opening was “still as much a fantasy as it was 10, 15 years ago.”

“Borrowing a beautiful dress, putting it on, isn’t tedium to me. I am as delighted today as I was many years ago. I’m allowed to wear beautiful clothes, and it’s a privilege and I honor that.”

Parker, who’s married to actor Matthew Broderick with whom she has three children, said that while motherhood hadn’t altered her style, she had to adjust her sartorial picks in keeping with a mother’s lifestyle.

“Dressing up now is about getting out of the door fast because the kids have to go to school in the morning,” she said.

Parker, 48, who said she tended to shop more for her children—James, 10, and twin girls Marion and Tabitha, 3—vowed to explore SM’s “legendary shoe department.”

“It’s amusing to dress the girls, though I don’t really dress up my daughters. They dress themselves,” she said. “Unlike my son, my daughters have very strong opinions about what they wear. It’s more colorful.”

The actress, inextricable from her famous HBO character Carrie Bradshaw, said that unlike her, Carrie was bold.

“I’m not. She throws all ideas to the wind when it comes to fashion. It would be foolish to say that the lines have been blurred between me and her. But it’s like living two lives,” said the fashion icon.

Parker advised busy working mothers like her to “dress in a way that speaks of who you are.” A celebrity red-carpet favorite, she said there was no big secret to staying chic while teetering in stilettos all day.

“If it hurts after six to eight hours into the day, take it off and rub your feet under the table, and put it back on,” she said.

At the press conference, it was announced that Parker donated $100,000 for the underprivileged of Taguig City, via the SM Foundation.—With a report from Pocholo Concepcion