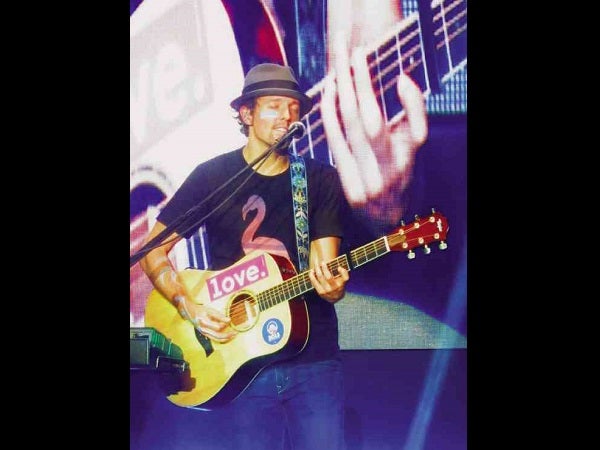 JASON Mraz has nothing but love for Manila. PHOTO BY FRAN KATIGBAK

On May 14, fans of Grammy Award-winning singer-songwriter Jason Mraz in the Philippines showed him that love is, indeed, a four-letter word—only that night, it was spelled M-R-A-Z.

No seat was left unoccupied at the Smart Araneta Coliseum for Mraz’s one-night concert. But everyone in the audience was up on their feet as soon as Mraz opened the show with a few lines from “The World As I See It,” before segueing to “Everything Is Sound”—two tracks from his latest album “Love Is a Four-Letter Word.”

Up next was “Remedy (I Won’t Worry),” a song released 10 years ago but obviously remains a crowd favorite, judging by the loud cheers and shrieks. Mraz changed the beat, adding a reggae flavor to the song. “I gotta tell you, though, worrying about stuff—it works,” said Mraz. “Because 90 percent of the things I worry about, never happens.”

Unlike his 2011 concert at the same venue, in which only one other musician percussionist Toca Rivera, played with him, last Tuesday’s show had a bigger, fuller sound—thanks to the brilliant accompaniment of the Super Band. It was a feast for the ears: There was banjo, violin, accordion, cajon, drums, electric guitar, bass, flute, keyboard, maracas, saxophone, trumpet and trombone.

Mraz’s next song, however, was a throwback to his acoustic roots. With a lone acoustic guitar, Mraz—clad in a black shirt with pink-purple flamingo print, jeans, sneakers and his signature fedora—sang “Who I Am Today,” a song about gratitude. Toward the end of the song, we could distinctly hear him singing “Salamat po”—which earned him appreciative cheers and chuckles from the crowd.

The band was back onstage for “Butterfly,” which pushed the energy higher. “Philippines, you got it!” sang Mraz. This was followed by a feel-good song, “3 Things,” and a long guitar intro to “Frank D. Fixer,” which Mraz dedicated to all dads and granddads.

If the gauge on how much the crowd loved a song was by how fast they raised their phones and tablets to capture it on video, then the next song definitely took one of the top spots. Once again, Mraz stood on the right side of the stage, alone with guitar in hand. When he quietly sang the first lines: “Was it you who spoke the words that/ things would happen but not to me,” the crowd roared its approval, and immediately sang along.

The band came back out for “Living in the Moment,” but instead of its usual setup spread across the stage, they crowded around Mraz, giving the performance a more intimate feel, like it was being held in a neighborhood café instead of the Big Dome.

Zendee, who was the night’s front act (she was introduced by Mraz himself, promptly at 8 p.m.), was back onstage for the duet Mraz originally performed with Colbie Caillat, “Lucky.”

The “YouTube sensation” was the envy of the women that night—she got a little peck on the cheek from Mraz as the song ended.

The next three songs were played seamlessly in a medley, with stellar performances by the guys on sax, trumpet and trombone: “Make It Mine,” “Live High,” and “Only Human.”

What followed was an intense performance of “Plane,” the only song in which Mraz didn’t play guitar. Mraz seemed lost in the moment, his eyes closed for most part of the song.

Introducing the next number, Mraz started speaking in a fake British accent. He had a disclaimer for “You Fckn Did It”: “The most interesting place we’ve performed this was in a kayak in front of an audience of penguins in the Arctic. So I want you to know that, if this song is safe for penguins, it’s safe for you. We are not advocates of this word, and we do not recommend you use it in ordinary sentences … But sometimes, when you really want to acknowledge others, there’s no better way to say it than, ‘You f*ckin’ did it.’”

Percussionist Mona Tavakoli showed off her skills during the fast-paced song, matching Mraz’s wordplay and drumming on everything from cajon to drums, and even on Mraz’s guitar as he punched the chords.

Another “intimate” number followed, with the band again surrounding Mraz, who played a medley of “I’m Coming Over” and “Going Up the Country,” a cover of the Canned Heat song.

Before his next song, Mraz thanked all his women fans, and “all the men who stand by these ladies, who come to these concerts with the ladies … This next one is for all the dudes out there. Because dudes, we all know that, sometimes, the ladies go a little bit crazy.” He played “The Woman I Love,” and on the huge background screens flashed photos of different girls and women significant to Mraz and his band.

“A Beautiful Mess” and “93 Million Miles” followed, and the last song, “I Won’t Give Up,” had the whole of Araneta singing along to Mraz.

A brief bow, and Mraz and his band left the stage, but not for long, since the crowd demanded, of course, an encore. Mraz granted us two more songs; first up was “Song For a Friend,” from the album “Mr. A-Z.”

The last tune of the night needed no intro—just a few strums of his guitar whipped the crowd into a frenzy. One could hear everyone singing along to every word of “I’m Yours,” which Mraz mashed up with “Every Little Thing Is Gonna be Alright.”

With the audience still singing along, Mraz ended in an a cappella with one last chorus: “I won’t hesitate no more/ no more/ It cannot wait/ I’m sure/ There’s no need to complicate/ Our time is short/ This is our fate/ I’m yours …”