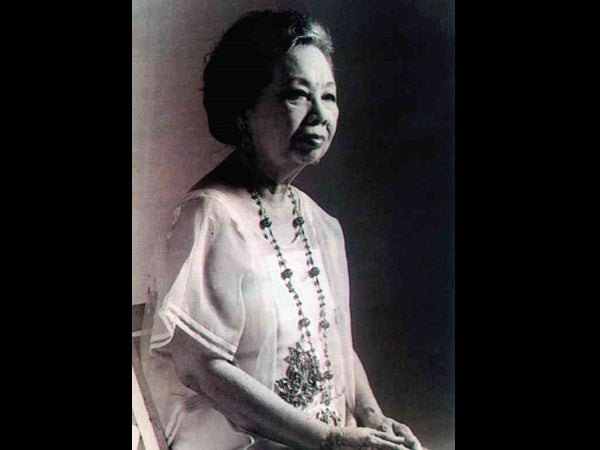 DAISY Hontiveros Avellana, 1917-2013. “I just hope to be remembered as a good human being. And that I tried my best.”

When I first worked with Daisy Hontiveros Avellana, she was all of 88.

By then she had survived five heart attacks, was suffering from crippling arthritis, had seen the loss of a baby, her husband, and even of her house to fire. I was asked by her daughter Ivi Avellana-Cosio to join a staged reading of Ladislas Fodor’s “The Vigil” to be performed at Far Eastern University (FEU). We rehearsed in the garage of their Pasig home and she sat there, script on her lap with an impish grin puffing up her cheeks.

Mari, her son, would confer with her quietly and then turn to give us instructions. I wondered then what she might have been like directing and acting in her heyday.

I had always thought of the Avellanas—Bert, Daisy and their offspring Mari, Ivi and Lamberto Jr.—as being the Philippine equivalent of the Barrymores in New York at the turn of the 20th century: a family of theater craftsmen.

Lamberto, the paterfamilias, was naturally the director; Daisy his wife, the exquisite actress; Mari and Ivi both dabbling in acting, producing, even costume design; and Lamberto Jr. the technical director. They were the patrician embodiment of English-spoken theater in the Philippines, when the language was used with a gentility and delicacy peculiar to its time.

There are a precious few today who can wrap their tongues around Shakespeare’s verse, much less fathom their meanings. But in the 1930s up to the ’60s, English theater meant commonplace productions not just of Shakespeare, but of Odets, O’ Neill, Sherwood Anderson, side by side with the works of Wilfrido Ma. Guerrero, Marcelino Agana and Nick Joaquin.

Daisy Avellana grew up in Capiz with the spokes of the theatrical wheel churning in her. She used to talk about her childhood to colleagues at the Barangay Theater Guild (BTG) like Joan Orendain—stories that narrated an animated, highly imaginative childhood that included playing a musketeer, playing an angel, horseback riding, playing the piano.

Her privileged upbringing in an hacienda in the province contrasted with her husband’s urban childhood in the genteel Tondo of yore. By the time they married in 1938, they had known each other for six years, having met in Cebu in 1932.

He was headstrong and visionary, a man who led with his guts. She was literary and even-tempered, but no less iron-willed. When Joan Orendain, playing one of the fevered damsels in Joaquin’s “Tatarin,” was asked by Lamberto to “rub her parts”—back to audience, skirt lifted—against a giant balete tree on center stage, she protested.      She turned to Daisy for support, saying, “If he asked you to do it, would you?” Daisy’s placid reply: “Yes.” Joan had no choice but to lift her skirt to what must have been a scandalized balete tree.

The Barangay Theater Guild was established in 1939, the year after they were married, as was the birth of their first daughter Marijo (who sadly died the following year). Lamberto also directed his first highly acclaimed movie “Sakay” that year, which was written by his Daisy. The cinematic careers of husband and wife would fuel the theatrical endeavors borne by the BTG, which went on to become a very active purveyor of English theater, producing original work by the likes of Guerrero, Joaquin, Orosa-Goquinco, as well as the adapted (by Daisy naturally) works of Coward, Farrar, Anderson, Shakespeare.

Needless to say, it was not looked upon as a reliable source of income for the family. But that didn’t stop it from flourishing.

Daisy functioned as a sort of dramaturg to her husband’s director. She was responsible for editing (with Joaquin’s blessing) “Portrait” into a manageable performance size. She also edited “Macbeth” in which she played Lady Macbeth and which BTG toured around Luzon. These while doubling up as the “mother” of the troupe. Although the performers did the shows pro bono, they were fed and kept comfortable by the Avellanas and BTG.

Daisy would cook them warm meals or treat them to Ma Mon Luk siopao and siomai and Sarsi if there was money made from productions. This wide-eyed idealism, fired by a sheer love of the craft, laid the ideological foundations of the theater companies that followed.

Repertory Philippines, Philippine Educational Theater Association, the Manila Theater Guild once did work primarily for the love of it. Arts administration as a science was unheard of. The Avellanas were the first power couple of Philippine theater, and Daisy was known as the “First Lady,” perhaps in recognition of her role as the bedrock of support for the solid timber that Lamberto was.

I asked Rustica Carpio how Daisy was as a director. As it turns out, my experience, except for the infirmity, was not too far from hers. Daisy was decisive and firm but never lost her sense of humor and equanimity.

She convinced the reluctant Ms. Carpio to take on the role of Kikay in Agana’s “New Yorker in Tondo” by arresting the protests with one word: “Silly.” Ms. Carpio went on to define the role for generations, and retired from the role well into her middle age.

Upon Lamberto’s death in 1991 of a suspected aneurysm, Daisy continued the work of BTG, scheduling readings and small performances produced by Ivi and Mari for institutions like FEU. Her right hand was permanently curled up into an arthritic ball; but she never stopped looking forward to playing the piano again even if it was just Bartok’s Concerto for Left Hand.

Daisy proved that being “First Lady” need not presume a leader to stand by and support—and that living for the theater can be enough to sustain one through a life of crises.

But the most invaluable legacy that Daisy Hontiveros Avellana may yet be credited for is the marriage of civility, humor, erudition and discipline in a craft that is all too often practiced thoughtlessly today. Witness the instant stars we aspire to be, in glittering shows of shallow import.

But whether we’re among those who have lost our way or among those who have kept our eyes on the ball, I think it’s safe to say that we Filipino theater practitioners can each trace our artistic bloodlines back to the vision of Lamberto Avellana and the “First Lady of Philippine Theater,” Daisy Hontiveros Avellana.