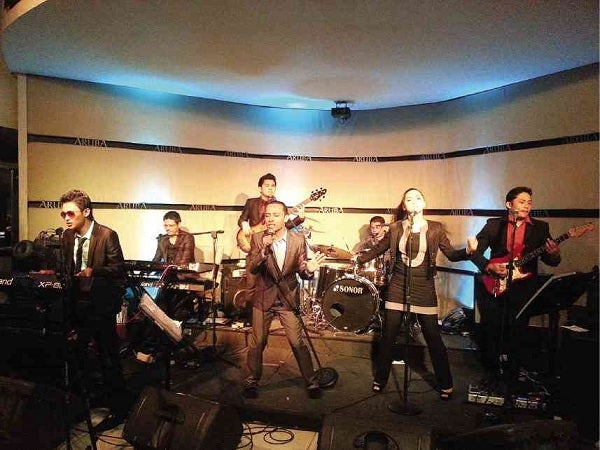 Metrowalk (Meralco Ave. cor. Ortigas) is a busy commercial complex that has rows of restaurants, bars, and, according to Gary Lising, a nice poker room where he goes occasionally to beat boredom by playing cheap card games.

Aside from the bars that feature live entertainment (Elbow Room, Kudos, Flare, Aruba, among others), there are also nightly shows with bands at the open-air plaza in the middle of Metrowalk.

On a Wednesday night, perhaps the most exciting venue offering live music here is Aruba. The featured act is a band called Milan, composed of seven members led by its live wire frontman, Hamillan Pavoreal.

We’ve known Pavoreal—or Milan, his nickname and his current group’s name—since the 1990s when his old band, the Bicol-based Blah, was signed by Warner Music Philippines and released an album. Blah eventually broke up but he did not stop pursuing his musical passion.

He went on to release his own albums (“Halo-Halo,” “Diskarte”) containing songs he wrote on his own and recorded with sidemen. These were brilliant albums, although probably not a lot of people heard them due to insufficient promotions and marketing at the time.

But on this night, Milan is the reason why Aruba has a full-house crowd. Most of the people here—composed of young groups of friends, couples, drinking buddies, a few middle-aged buddies—are apparently his fans who watch his Wednesday gigs regularly.

Wednesday is also “’80s Night” at Aruba, says its operations manager Jokz Aquino. It means there is a DJ spinning records from that decade, in between Milan’s three-set performance.

On its second set when we arrive, the band opens with a note-for-note cover of “Hard Habit to Break”—the song’s power-ballad tempo driving the diminutive Milan to own the stage. His kinetic persona revs up as he goes to each one of his bandmates to channel his energy, teasing female vocalist Yuan Rabago one moment, and then egging on Aaron dela Cruz (keyboards, guitar), Florante Biscaro (drums), Darrel Villanueva (lead guitar), Renzy dela Cruz (bass), Charles Olea (keyboards) to keep pushing without letup.

The band members do not disappoint. As the next numbers are played, delightful renditions of hits by Samantha Sang, Fra Lippo Lippi, The Cure, Modern English, Hall & Oates, Mike and the Mechanics, Murray Head, it is quite obvious that we are watching performers seasoned either by religious practice or actual years of experience—even if some of them look young.

There is just one drawback, though: Rabago has a distracting tendency to mimic Milan’s moves, which does not suit her. In fact, her own body grooves look like trying-hard attempts to come off as cool, but end up as cheap—imagine the choreography of the typical “show band” female singer in a hotel.

She likewise tries a bit too hard to make her interpretation of “Emotion” in a contemporary R&B vein. But fortunately, she sticks to the original versions in her other solo spots, and sings well on backup.

Milan, meanwhile, appears larger-than-life, electrifying the audience with his dancing, twirling, bouncing and virtually turning the stage upside down with his boundless energy. All these without losing his voice— which can effortlessly switch from pop, rock, soul, funk, dance, geez, is this guy for real?

In several instances, he jumps offstage, stands up on a chair and drives the crowd into a frenzy, teasing them to dance along if they wish. Many of them respond, leaving their seats to shake their hips.

At one point, he seems to be running and floating on air.

When he sings “Kiss,” we don’t think of Prince or Tom Jones, because Milan has a way of asserting his own identity while sticking close to the song’s original form.

His version of “Gold,” the Spandau Ballet hit that has become stale from being covered too often, sounds refreshing and intense.

The music goes on and on, the band playing like a well-oiled machine, the songs eliciting cheers as soon as the first few bars are heard: “Everybody Wants To Rule the World,” “Breakout,” “She Works Hard For the Money,” “Take on Me,” “Footloose.”

And when the band pulls a surprise with “I’m So Excited,” Rabago on lead vocals and Milan on backup, the lyrics capture the mood of what this whole act induces: “I’m about to lose control and I think I like it.”

Indeed we lose control and chug three ice-cold San Miguel Beer Lights in quick succession. The pulutan we ordered, Smoked Salmon with Mango, Cream Cheese and Cashew Nuts, is something to come back for.

Recorded dance music segues after Milan finally leaves the stage. DJ Martin Porta chooses a selection of dancefloor classics by Michael Jackson, KC and the Sunshine Band, ABBA, Chic, New Order, even VST & Co. and, shucks, The Boyfriends! It’s anything goes now, and dancing couples sway to the beat beside their own tables.

This is crazy, our mind startled by the marriage of rock (Milan’s show) and disco (DJ Martin’s set), though soon we realize how stupid we are for forgetting that these genres share the same roots: rhythm and blues.