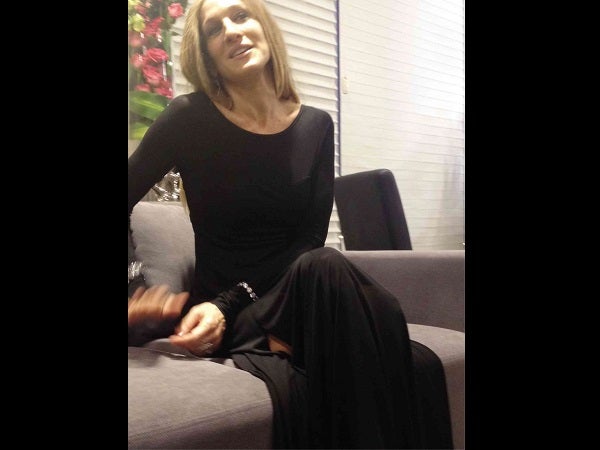 Guess what Sarah Jessica Parker brought home to NY as ‘pasalubong’ from PH?

She got some world-famous sweet dried mangoes and some stuff from Kultura, the contemporary Filipiniana store of SM.

It’s not that known that SJP collects parasols, but she does and loves them. We learned that her team was looking to get some good finds for her at Kultura—parasols for her home.

Indeed it’s notable what today’s über fashionista—who got millions of women worldwide into wearing luxury fashion brands—has chosen to bring home: something for the home and which her children might love, Philippine sweet mangoes; at the end of the day, a mother’s simple needs centered on her kids.

We also learned that she was light and easy to host, no diva ways at all.

In her private interview with Lifestyle, we asked her what’s kept her grounded despite the ultra-glam and glitz of her career. Even before she could answer, her face broke into an expression that seemed to say that she was surprised that we were surprised at all that she’s got her feet firmly on the ground.

Then she said it must have been her family now and how what is most important are her relationships.

“I think having kids and being one of eight kids myself, I just don’t see why I wouldn’t be,” she said. “I want to be a person who has relationships with people, all sorts of people, and lives a life that’s normal.”

While she looked so elegant and sophisticated in her stretch-and-sheer long black dress, SJP actually struck us as much warmer than her Carrie Bradshaw style persona. She had a soft handshake; her eyes smiled as she looked at you as you spoke to each other. She wore barely-there makeup even as her eyes were highlighted; her lipstick was in a nude shade.

And most important to us—she was giving not perfunctory answers, but candid ones in which she didn’t seem to hold back. She was one celeb interviewee who didn’t mind elaborating on her answers, whether she was talking about Manila heat vis-à-vis Manhattan heat or traffic.

I must admit that on “Sex and the City,” Carrie wasn’t my favorite character; I was more amused with Sam’s sex-holic rawness and honesty and Miranda’s desperate multi-tasker persona.

Carrie was simply too fashionista-put-on for me; I mean, do Manhattan in five-inch heels? (Apparently you can, in the right Blahniks, but then, don’t think about your lower back.) Carrie’s so-put-together look, even as she was on mundane errands, was simply not us, right?

Surprise. Last Thursday, SJP—even as she was in five/six-inch-high Blahniks—talked about how she’s into wearing flats now. Her wardrobe wasn’t over-the-top, just a basic black snug dress with sheer flowing skirt that gave us a faint glimpse of her thighs and legs.

The high-glam wattage came only from her diamond tennis bracelets, on both wrists, and chandelier earrings. The tennis bracelet was a string of huge sparkling diamonds. (Do you think she will wear faux diamonds?) Such appropriate glitter stood out against her black ensemble.

Her hair was her signature SJP: long and straight, parted in the middle, its hue as light as the sun at twilight.

Up close and in person, she looks much slimmer (if that is at all possible) than her size-zero Carrie Bradshaw. She’s actually slight and petite. I couldn’t help but stare at her clavicles, that were as lean as those of an adolescent’s.

Somebody also noted, correctly, how her facial features were much softer in person than on TV or the big screen. Her face wasn’t as angular.

When she talked about travels or this first visit to Manila, and the Manila heat and traffic, she showed, what to us, at least, was a New Yorker state of mind—open to the unexpected, unfazed by anything.

SJP is now the global face of SM Store’s “Love to Shop” campaign. She flew in last week for the Thursday opening of the SM Aura Premier at Global City, and spent Wednesday doing the shoot for the campaign. She brought her own photographer, stylist and hair/makeup artist.

She really had no time to go around or to eat out, not even a private dinner. No socials, obviously.

The SJP “Love to Shop” campaign marks the rise of the new generation of SM Stores in the country—upscale, innovative shopping and cutting-edge architecture.

But I must say, last Thursday, it was an ordeal trying to get to our SJP interview. It took us almost an hour to get from Serendra to SM Aura, which is only a few blocks away. Traffic was not moving, and worse, as we were about to pull over to SM Aura, the traffic aides were motioning the vehicles to move on so that we had no choice but to drive on.

Before we knew it, we were back at C5 and inching our way back through McKinley Hill. Ridiculous but true. From Serendra, there was no right-turn access to the SM Aura driveway.

We were really cutting it close, especially since SM’s Millie Dizon was texting us that Lifestyle’s interview was coming up. Instead of getting some rest after the ribbon-cutting, turned out SJP or her team decided to move up the scheduled interviews.

Since the traffic around SM Aura was at a standstill, when we were a few blocks away, we hopped out of the car and hiked our way to the venue. I changed into my flats (always bring a pair—wherever and whatever). Cheche (Moral) was more heroic—she did the killer walkathon in her five-inchers. (There must be a journalism award for writers who chase their stories on killer heels. Honestly.)

But we made it on time. Anyway, what’s up with Global City and SM? Why the (non-) access route to SM Aura? Perhaps for the first time in Philippine retail history, SM is running an ad with a guide for motorists on how to get to SM Aura. People needing a guide to find an SM mall? Never thought that would happen in my lifetime.

Anyway, all roads led to SM Aura last Thursday, if not literally, at least figuratively. Victorious politicians were around, and so were diplomats and their spouses, including Paulina Mayorga, the wife of the Chilean ambassador Roberto. The diplomats’ wives are busy preparing for their benefit fashion show later this month.

Ben Chan, Virgilio and Nenita Lim, Bryan Lim, Miguel Pastor were checking out their new “baby”—Paul, the famous bread store chain from Paris, which is now right past the Aura lobby.

It was a welcome break for me to meet up with friends from Cebu who came in full force.

Cristina Ponce Enrile made the effort to come and was shown around by Tessie Sy-Coson.

There were also the usual suspects—the stylista “celebs” who came, no doubt wanting their Instagrams with SJP. (I don’t know if they even got that close to her.)

A heartwarming sight, however, was that of the SM patriarch, Henry Sy, at the SM Aura lobby as the SJP press con went on nearby. People flocked around the founder, wanting their photo taken with him. Even given his driven character, never in his youth perhaps did he imagine that his business would grow into the monolith it is today—with Hollywood’s A-list actress as its face.

On the SM Aura driveway, as cars drove up one after another, on standby was the jet-black stretch limo that would take SJP back to the Peninsula Manila where was billeted.

We didn’t stick around long enough to see SJP being whisked away. What we saw instead was Gretchen Barretto going behind the wheel of her white Maserati and driving away.