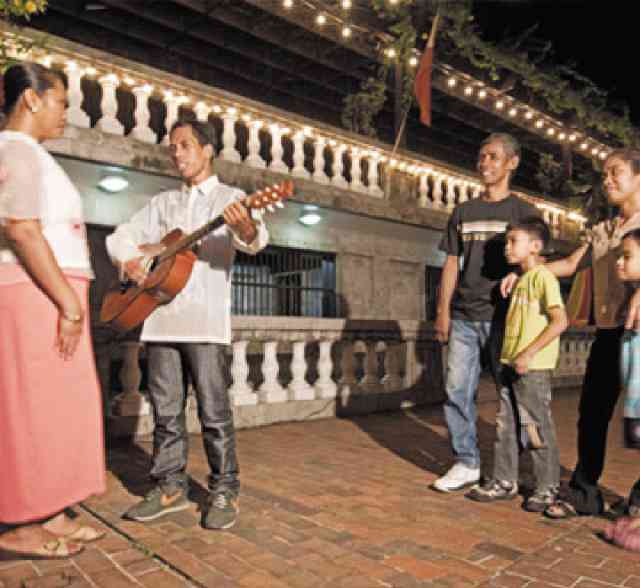 A CEBUANO harana at the Casa Gorordo garden

Once a year, museums and heritage places in Cebu City open their doors from 6 p.m. to midnight. A single ticket guarantees admission to all participating venues. Buses or tartanillas (horse-drawn carriages) are provided to transport visitors from one museum to another.

Held every last Friday of May, Gabii sa Kabilin (“night of heritage”) is the only museum and cultural event of its kind in the Philippines that was patterned after White Nights, a special night when all museums in European cities stay open until midnight.

Gabii sa Kabilin was introduced by Rafi (Ramon Aboitiz Foundation Inc.) and Vamgi (Visayan Association of Museums and Galleries Inc.) seven years ago, then a modest event participated in by four neighboring museums in Cebu’s heritage Parian District which joined together to raise Cebuano awareness of their shared heritage.

The event is a community effort as well. In last year’s Gabii sa Kabilin, nine city barangays deployed their tanods to secure the routes as well as provide volunteers to man information desks and drive designated buses between venues.

From four participating museums in 2007, this year the Gabii sa Kabilin is the biggest ever, surpassing last year’s 22 destinations. Now participating is a total of 33 heritage destinations located in the four biggest cities of Metro Cebu.

Each destination will present its own variety of cultural performances, Cebuano culinary experiences, art fairs and special exhibits.

Cebuano crafts demonstrations include rattan weaving, furniture and guitar exhibits. Traditional Cebuano delicacies will be available at each of the participating venues. An all-night food festival in Lapu-Lapu City is planned.

There will be special tours at the National Historic Shrine Liberation Monument as well as at the 176-year-old Santa Teresa de Avila Church in Talisay City.

Filipinos think that museums are boring places, but Gabii sa Kabilin dispels that misconception by offering a night of fun while highlighting Cebuano culture, providing a once-a-year experience that encourages many to return and visit museums on their own.

Culture is fun, after all, and Cebu museums are set to show that it is.

Gabii sa Kabilin was the first cultural event of this scope to be honored with an Anvil Award in 2011.

The award, a national validation for the museums, barangays, institutions and private companies that share the Rafi vision, recognizes that heritage is an underutilized catalyst that provides communities better understanding of their strong sense of identity.

More importantly, Gabii sa Kabilin has proven to the urban Cebuano community that heritage is an unrecognized driver for development. The activity brings increased economic opportunity to the participating local community and to the barangays.

Museums are also a source for community development, so the event is a community effort as well.

Barangay residents are vital participants in the event organization. Some are trained to conduct individual tours. Others are deployed to ensure safety for visitors walking to and from venues on downtown streets which have been closed for the event.

It’s a fiesta, and Filipinos are fiesta people. That’s why it has been so successful.

The organizers encourage the replication of the event in other cities of the country, a challenge well worth taking up.

Imagine having museums and heritage places all over the country offering special activities and exhibitions until midnight on the last Friday of May.  It would be a night for all of us to enjoy being Filipino.

What a fiesta that would be.

Information  at www.rafi.org.ph or www.facebook.com/rafi.org.ph; you may download the Gabii sa Kabilin e-Guide Booklet, which provides detailed information about the destinations, each of their programs, and maps of the tour routes.

Tickets can be purchased now or reserved in advance at any of the participating destinations, or through the Rafi website, or contact Karl Damayo or Florencio Moreño II at Rafi in Cebu, 032-4187234 local 703.