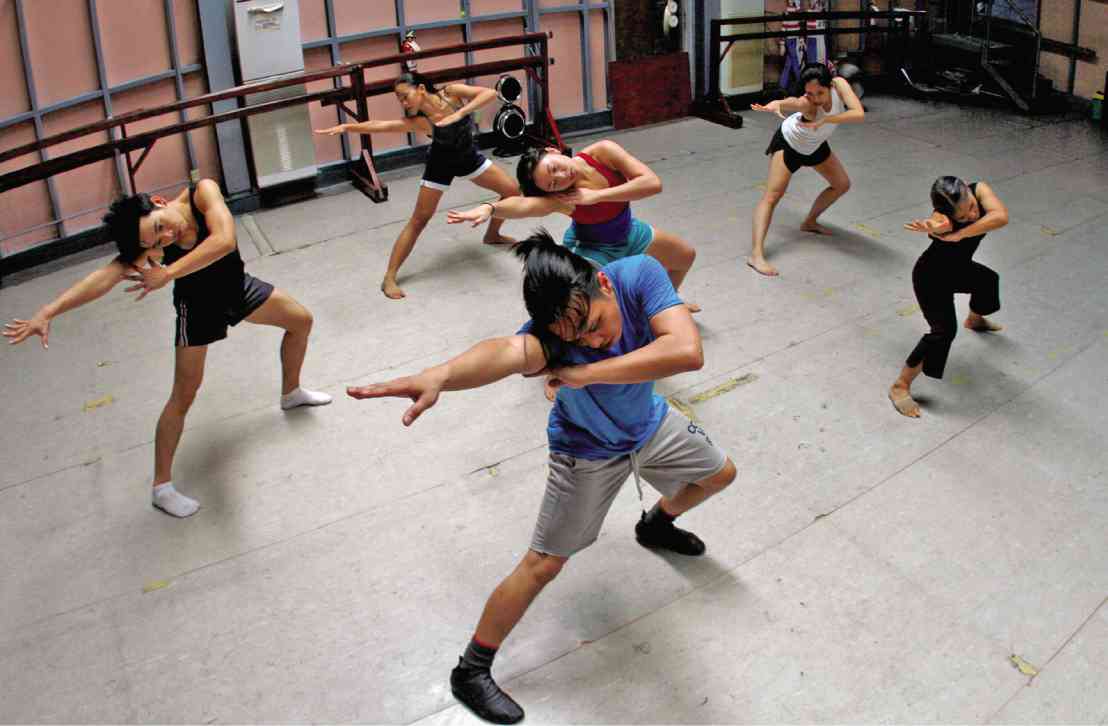 ON TEACHING: “My job is to take care of students so they don’t get hurt.”

Like a violent tornado, he spins into a jump and pretzels on the floor with nary a joint or muscle endangered. When dance artist Ernest Sarino Mandap executes this explosive movement, the muscular control of the landing is imperceptible. The only thing the audience sees is the contrast of the sharp trajectory in the air and the weightless surrender to the earth.

This is one of the trademarks of Mandap’s style which he acquired through years of living in France. At 40, his dancing still commands attention.

“In youth, you’ve got energy,” says Mandap. “You want to show off the turns and the high jumps. I still like that physicality. But now, I want to savor the movements, whether you’re just caressing, lengthening and extending.” To him, it’s not about the number of turns or the jumps, but the expression.

“As the years pass, you’re more patient, and this affects the dancing.”

In his regular home visits, Mandap is a sought-after choreographer and mentor. This year, he’s making his choreographic debut for his alma mater, Ballet Philippines; composing several dances for a loyal client, Ballet Manila and for Perry Sevidal Ballet (PSB). Sevidal is a former colleague from BP.

Between rehearsals at Sevidal’s studio, Mandap explains that his choreography isn’t about technique and virtuosity (although there are some of that). He nixes the razzle-dazzle and the unnatural body positions of ballet which viewers deem unreachable. He favors movements that evoke the familiar—activities from everyday life, stylized tribal gestures and contemporary dance movements that are personalized.

His choreography for PSB, titled “The Here and After,” celebrates Sevidal’s relationship with her protégés. Mandap plays the galvanic energy of the younger dancers against the suave contractions and releases of the veteran Sevidal. Her solo is a series of sweeping gestures and gentle impulses, a breather from the athletic passages of the youth.  Yet the mature performer seamlessly blends with them as their bodies jump like outbursts of volatile energy that land in collapses on the ground.

There’s a very casual feel to the composition which captures the dancers’ real-life ease with each other.  “It’s not all running and throwing ourselves,” says Mandap.  “Some movements in the first part are echoed in the second half. It’s like life. We learn something  as we go on, then we go back to what we’ve learned.

“I want to create movements that are uncommon,” he says. “People can’t predict what I will  do next. It’s like writing a letter wherein you invert the structure. There’s always a surprise.”

He shows the dancers how to spiral then shift gears to do a cartwheel  in the opposite direction. Then there’s the play of opposites: While performing accelerated movements, the mind is quiet, but when it’s an adagio, the energy is intense, not languid. “A teacher helps  students develop their own movement quality,” he explains. “They should move like air or water while learning to work with gravity, how to interact with one person, a group or the space.”

These are the little secrets that have made Mandap’s performance and choreography very compelling to watch. He unselfishly shares them with the dancers.

Dancing came naturally to Mandap who, as a toddler, would respond to the rhythms in “Sesame Street.”  He was a dance major at the University of the Philippines while performing with BP’s junior company. In 1991, he joined the Le Jeune Ballet de France. The following year, he moved to Nantes, a city in western France, where he became a member of Centre Chorégraphique National de Nantes Claude Brumachon-Benjamin Lamarche. Brumachon’s style is characterized by cathartic movements, violent thrusts, angular positions, and using the weight of the head to drive the body’s momentum.

After nearly a decade with Brumachon, Mandap co-founded Animal/Animas/Company Esther Aumatell, with Spanish choreographer Aumatell.  He then adopted another style, inspired by Pina Bausch. Arms loop overhead into a curve while torsos twist to volatile extremes. The bodies are like rotating columns of air that are caught in passion that consequently slip into another emotion.

“Brumachon was intense, explosive and tortured,” says Mandap. “Our improvisations would drain us.  With Aumatell, the technique is gentler, curvier, and allows you to blend the contemporary with the classic.”

Living in France for 22 years, his life had revolved around teaching, touring and performing in big stadiums with audiences of over 8,000.  The fruits of his efforts were winning the special prize from the Florence Gould Foundation at the Paris International Dance Competition at the Theatre Champs-Elysées  and first prize on the Fifth Choreographique Competition in Sabadell, Spain.

Last year, he was cast as one of the Lost Boys in “Peter Pan: The Never-Ending Story World Arena Tour.” Out of nearly 1,000 applicants, Mandap was one of the six boys to get the part. He will be resuming the “Peter Pan” world tour in the fall.

Meanwhile, Mandap has been spending most of his time teaching. In France, teachers require certification before they could get work. He received Le Diplome d’Etat (The Diploma of State) as a dance instructor in contemporary dance. Mandap teaches all ages from young children to adults.  Teaching jobs are easy to get because dance is a requirement in school. Likewise, adults take dance classes not as an exercise but as a lifestyle. The French value the importance of cultivating arts appreciation.

During his home visits, Mandap is tapped by friends from Airdance, Academy One and  other dance companies because his dances look fresh and innovative in the eyes of the local audience. Mandap says his choreographic style is a creative collaboration between him and the dancer. This was borne out of his tenure with Brumachon’s company wherein the dancers would improvise for months before the work was premiered.

“We had  a lot of intellectual stimulation like reading books and looking at paintings,” recalls Mandap. When Brumachon composed a work inspired by “Lord of the Rings” way before the movie adaptation, Mandap read the book carefully to absorb the character of a Hobbit.

“Gestures come out in improvisation.  Then you start imagining how your character would look. You search for the physical quality and engage yourself emotionally.  Like actors, we immerse ourselves into our roles.”

When Mandap choreographs for a group, the dancers become more aware of each other.

“I don’t give counts. I want action and reaction. Sugod! (Charge!) We can then create a collective rhythm.” Thus the performers dance not to the music but in spite of it.

There are no terms for his gestures, since they are innovations. Imagery is vital when Mandap communicates movement. “During rehearsals, I am creating a story. Why do I do this? Why am I holding the person? Why do I throw myself? Even transitions must convey a story.  I’m not just executing steps. A dancer is also an actor and musician. As storytellers, people have to believe in what we say.”

Mandap’s work will be premiered at the PSB recital on June 5 at the Cultural Center of the Philippines.