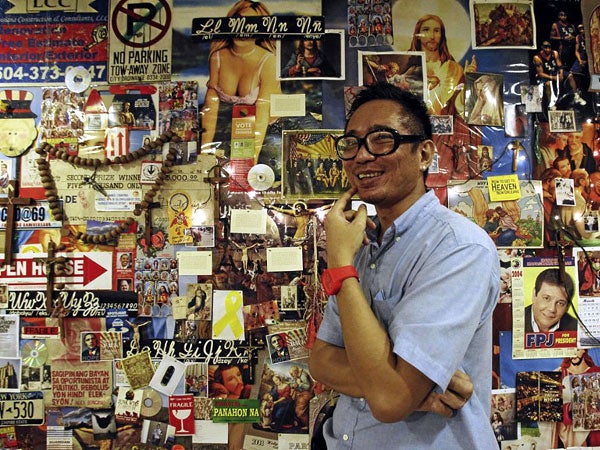 From Religion to Idol Worship

For a week or so, the media and the Internet became electric with debates, discourse, insults and analysis. Christian groups and senators demanded blood. Heads rolled and lawsuits bloomed. Death threats and vandalism followed. And for what?  An artwork.

The point of contention is an installation work by Mideo Cruz titled “Poleteismo,” part of the “Kulo” group exhibition  at the  Cultural Center of the Philippines (CCP) launched on  June 17 to  celebrate the 150th birth anniversary of national hero Jose Rizal.

As the CCP backgrounder states, “Because all the (32) participating artists had a common educational background, all having studied at the (University of Santo Tomas), they felt it fitting that the theme of Jose Rizal also reflect the heritage and culture represented by the 400-year-old university.”

But media coverage of the exhibit by a major TV network focused on Cruz’s installation, with the resulting outcry quickly burying the exhibit’s laudable intent.  “Poleteismo” was alternately denounced as “offensive,” “vulgar,” “sacrilegious,” “pornographic,” “sick and sickening,” “disrespectful of the Christian faith,” and so on, with the barbs targeted at the artwork’s use of phallic symbols and contemporary pop icons like Mickey Moore to portray Jesus Christ.

“Poleteismo” so incensed one unidentified couple that they sneaked into the CCP to vandalize the artwork and even attempted to set fire to the exhibit. This in turn prompted the CCP to hold a forum on the issue, a jampacked gathering of religious and lay Christian groups, teachers, students, artists, art educators and activists where emotions ran high and heated exchange ruled the day.

Finally, with several politicians weighing in on the controversy, notably CCP founder and former First Lady Imelda Marcos who expressed disgust over the artwork, the CCP decided to shut down the exhibit.

In its statement, the CCP acknowledged the “numerous e-mails, text messages and other letters sent to various (CCP officials) and the artists themselves (and the) increasing number of threats to persons and property,” and cited these as the basis for their decision to close down the Main Gallery where the Kulo Exhibit is on display.

The statement added:  “Following serious discussion, the Board members agreed on the common objective, to nurture freedom of artistic expression, while recognizing the responsibilities that go with it.”

The furor has also led to the resignation of Karen Flores, CCP’s head for its Visual Arts Division.

In a Catholic country, such reaction might perhaps be expected, with detractors citing the Revised Penal Code’s provision on “offense against religion,” while the art community staunchly defended the exhibit as an exercise of the constitutional provision on freedom of expression.

Ironically, “Poleteismo” has been exhibited since 2002 in such venues as the Ateneo de Manila, UP Vargas Musueum and Kulay Diwa Galleries, but hardly provoked controversy.

Its artist too has earned recognition and awards prior to this outcry, among them the Ateneo de Manila Art Awards in 2006 and the Cultural Center of the Philippines’ Thirteen Artists Awards in 2003.  The performance, media and visual artist has also exhibited extensively in the art centers of Asia, Europe and the US since 1996, and has received numerous prestigious international art grants.

Cruz has been described as a provocateur who uses art to generate a strong reaction from his audience. A performance show once featured him lying on a slab covered in blood, with a gigantic rosary hung across his neck.  An exhibition catalogue once described his work as “distinguished for his provocative multi-disciplinary interventions straddling the irreverent, the blasphemous and the subversive.”

Artist/writer Philip Paraan decribes Cruz as “one unrelenting artist-activist, a facile generator of anxiety and debate, and is skilled in the production of excitingly intellectual images and forms within the unorthodox as seen in his art practice teeming with imitable social and political commentary.”

What Cruz has done in “Poleteismo” was an obvious attempt to shock.  In art, shock value is the “potential of an image, text or other form of communication to provoke disgust, shock, anger, fear, or similar negative emotions.”

Throughout the history of art, there have been artists who deliberately attempted to shake the status quo, to provoke a strong reaction, to challenge the establishment. At times they manage to capture the public attention, but sometimes they have been known to resort to the manipulation of events and circumstances to produce their desired results – all for the purpose of finding ways to be heard or maybe gain some spotlight amidst the highly competitive art world.

In this case, media has contributed significantly to create the ruckus.  What should have been kept within the “sacred” halls of art galleries and museums where previous works of the same nature as Cruz’s are a common fare, was irresponsibly laid by media on a public largely unfamiliar with art’s esoteric ideals.  These types of work should first be critically examined, interpreted and filtered by art critics, art historians and academicians before they are served to the public.

As it is, some of society’s more conservative sectors were confronted with a raw experience of having their objects of worship defiled, again not uncommon in the art world. But what the religious groups should have been concerned about was not the merits or demerits of Cruz’s art, for they are not qualified to do so, but to ask why someone like Cruz has intentionally and publicly declared his irreverence for such icons of worship that have been revered for the last 500 years, considering that he himself was educated in a Catholic institution.

In an e-mail interview with SIM, Cruz explains himself:
SIM: In a TV interview, you said you couldn’t help it if people object to or are provoked by some of your ideas.  Knowing that you have indeed offended some sectors, can you describe how you feel today?

MC: Judging from the recent forum at the CCP, I feel that some people are at least a century behind. I was surprised that some people would argue that their standard of beauty is taken from Thomas Aquinas or that their basis of contemporary aesthetics is from Luna and Hidalgo or even, more recently, from Amorsolo.  I think people should behave in harmony with contemporary developments.

The images presented in my work for “Kulo” are what we are creating subconsciously in our culture. We need to realize that it is a mirror of our society and of ourselves. The uproar it created might be the unconscious denial of seeing ourselves truthfully in the mirror. The realities in our society are the real blasphemy of our own image, the blasphemy of our sacred self. Sadly, it seems that we don’t want to consciously look into ourselves; we’d rather ignore or deny it.

SIM: Can you describe the history of “Poleteismo?” In your exhibition note, it was mentioned that the work began in 2002.

MC: Several versions of “Poleteismo” have been shown in various venues starting in 2002 at the UP Vargas Museum with (artist) Jose Tence Ruiz as the curator.  The second time I did it was in a music video in 2007, and the third was for the group show “tutoK Nexus,” also in 2007. The most recent is at the CCP where I also included some works from the Kulay Diwa exhibition like “Relic,” “Poon” and “Altar.”

MC: I grew up seeing my mother posting all our family pictures, certificates, and medals on the walls of our house. I’ve seen similar things in our neighbors’ houses – with posters, calendars, photos of politicians and celebrities adorning their walls. I tried to recreate the idea behind these things in the same aesthetic manner. I see it as a methodology of how people show their accomplishments, connections, attachments and devotion. It is also a subtle way on showing how we want ourselves to be seen on the surface. So this is a sort of reflection: mere representations of things we see of ourselves – how we build ourselves through our idols vis-a-vis how these things have shaped and molded us.

The basic concept of “Poleteismo” is still the same but the work is constantly changing both in concept and in form. In the present setup in CCP, you can look in the center of the relic (the cross) and you will literally see your reflection from the convex mirror attached to it and the wall collage behind you, which is figuratively another reflection. This is to denote the continuous cycle of history.

One signifier that has been newly adopted in my piece is the symbol for “source of power.”  At the UP Vargas Museum in 2002, I initially signified power with the use of a line of electrical sockets shaped into a cross and installed light bulbs all over the wall which was plugged into the “electric cross.” This time in CCP, I used the phallic symbol to denote power, a symbolism that can be attributed to patriarchy and feudalism.

I feel that some people just want to look at the surface – they forget that some of the phalluses wore election wrist bands to symbolize political power. (A lot of them though went missing after the opening.)

SIM:  Have you always used religious images in your work?  It seems that your work used up a lot of Catholic imagery, something like 60 percent of the installation. Does this mean that on a personal level, religion has been a strong experience for you?

MC: Religion plays a big part in our history. We cannot escape it after 300-plus years of Spanish colonization. It plays a big part in the formation of our culture as Filipinos. It is unavoidable to include these images when we tackle subjects concerning our society.

SIM: Catholic imagery seems to have lost its spiritual power over you as you have often reduced it to mere objects of idolatry.  When did this spiritual transformation happen? Can you describe your current religious views?

MC: I was raised a Catholic, part of the 80 percent Catholic (population) in the country. I grew up believing in Santa Claus like everyone else.  But as you grow up, you gain more knowledge about the world you live in. You learn about things that separate myth from reality.