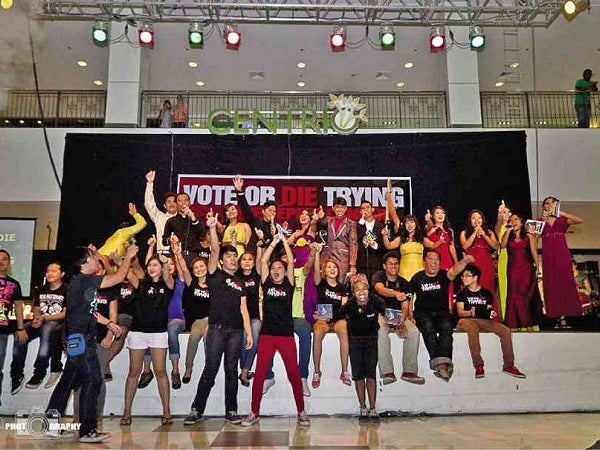 Prof. Evans Yonson (seated, second from right) with his performers and staff

And then the unthinkable happened—a new mayor was elected in Cagayan de Oro City, replacing someone entrenched in power for 15 years.

But for those who attended or were behind the pre-election musical theater event at Centrio, the Ayala Mall in Northern Mindanao, four nights before election day, this was a no-brainer.

We’re talking about “Vote or Die Trying” (VODT), a voters’ education show that, under the aegis of Prof. Evans Yonson of Xavier University-Ateneo de Cagayan (XU), brought together exciting talents from XU, Liceo de Cagayan University and the Mindanao University for Science and Technology (MUST) to articulate the concerns of the city’s electorate.

(While Capitol University did not field its talents in the show, it has to be congratulated, too, for hosting another important voters’ education forum and for being in the thick of several sociocivic initiatives.)

From beginning to end, VODT was a blast—brave, daring, eloquent, hopeful and power-packed.

It put to the forefront many issues bedeviling the city. The lives wasted by Typhoon “Sendong” and the chaos in its aftermath. The untenable peace-and-order situation in what is supposed to be an urban center in Northern Mindanao. Widespread poverty and unemployment. The plight of today’s children. Even gender violence.

“Inay, Itay, please naman/ Maging bukas at sigaw ko ay pakinggan,” belted out Jose Uy with such raw piquancy in “Mapaghusgang Sambayanan.” The way he cooed the “woooh” refrain lifted the song from the literal message of its gender sensitivity theme to a heartrending plea for an affirmation of all our common humanity.

“Bully Bully Mo” lured the audience with its fun beats and zany humor—except that its subject matter was not funny at all.

There were two Bisaya numbers that got us. “Asa Na Ta Karon? (Where are we now?)” was a multimedia excursion into Typhoon Sendong and what happened afterwards. It sought to take to task people in power who were responsible for the tragedy.

When the unassuming Denvie Gabales, VODT’s musical director, went up the stage to whack the audience with “Trabaho,” a lament about the plight of the unemployed, the energy of the show shot up way beyond mercury readings. Way to go!

The air went electric when Next Moves, Liceo U’s modern dance company, performed its acrobatic rendition of “Dapat Tama,” Gloc-9’s election anthem. The choreography of Roger Odron, Hall of Fame awardee of the National Commission for Culture and the Arts-sponsored National Modern Dance Competition, was a street-smart, class act.

The Peacock Boyz of MUST proved to be a crowd-pleaser, too, with its zany, self-referential routine breaking stereotypes.

Still and all, the star of the hour (make that three hours of the show) has got to be Jethro Javier, the lead vocalist who was simply on fire that night. His presence and performance singed the very air, underscoring for one and all what the musical theater event was about: believing in the good fight and  tapping the energy of the youth in articulating the city’s hopes for a better tomorrow, and setting aside differences and seeking connections with one another to sing the same tune for change and a fresh start.

“We need to give back to Cagayan de Oro City its dignity and credibility,” Jethro said. “We have to do right by the city.”

That quite sums up the voters’ education gig that was “Vote or Die Trying.”

“The VODT began as a class activity,” admitted Professor Yonson, who has just been named director of the university press at Xavier University. “My class was Communication Media and Society under the Development Communication program, and it required the understanding of the uses of the different media forms to effect positive social change. The class of 75 produced numerous IEC materials that revolved around the idea of the elections and voters’ education of the issues that the city/country is/are facing now. We used traditional media forms such as poetry-writing, songwriting, news articles, radio plugs, posters, etc., as well as modern forms like the Internet, through social media networks like Facebook, Twitter, Instagram and so on.”

When the idea of a musical-theater event as a class culminating project came up, the students began to break up into groups. They discussed pertinent social issues they wished to tackle. Then they wrote the songs. They also composed the music and even produced the album.

“In terms of mounting and preparing for the concert, the whole class contributed everything,” Yonson said.

The show opened on March 2 at Limketkai Mall.

Its successful run prompted Yonson and the Research and Social Orientation cluster of the university to hold a repeat just before the elections.

“I think the activity has made the students more aware of what issues our political leaders should be addressing,” said Yonson. “The show has made an impact in terms of voters’ education because we were able to partner with several civic groups and universities in the city who share our advocacy for positive social change through voters’ education.”

And the voters listened.