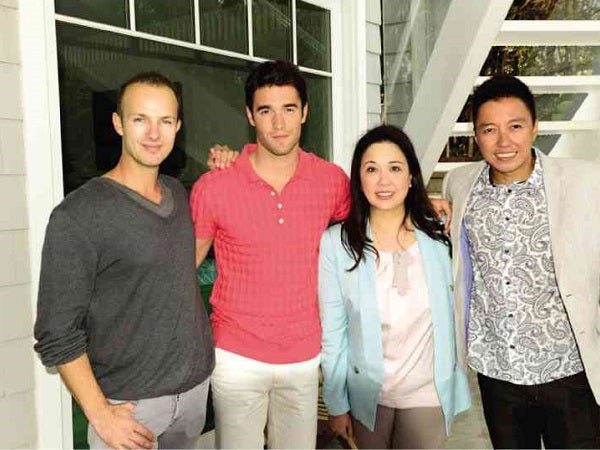 And that’s why it was kind of funny that we were inside a very pink, very girly room—one of the many rooms in the Malibu beach house that was the venue of his Penshoppe campaign shoot (quick trivia: this was the same beach house you saw in “Hannah Montana.” Yes, Miley Cyrus—or at least her TV alter ego—used to live here).

In one corner was a huge pink doll, a little cute but also a little creepy. There were two small pink beds, just the right size for little girls. Josh chose the one on the right, dwarfing it with his six-foot frame.

It was hours before he was set to make a red carpet appearance with his “Revenge” costar and real-life girlfriend Emily VanCamp at the “Iron Man 3” world premiere at El Capitan Theatre in Hollywood.  Unlike a lot of actors, Josh doesn’t rely on stylists—he actually chooses what he wears on the red carpet.

Asked what he’d never wear, he pointed to the headboard behind him: “This color, bright pink.”

What do you love about Penshoppe?

Are you into fashion? Do you enjoy dressing yourself?

I’m into fashion. But I also like to be able to pick up my trousers from the previous day and maybe just get a new T-shirt.

Yeah, I’m not too fussy. But I think I probably do care a little bit more than others which is also why I took on this project. I like that Penshoppe is fashion-conscious and current.

My style would probably be London street mixed with a California surf kind of feel to it.

What are five fashion items you can’t live without?

A good pair of shoes. Shoes are pretty key.

So what’s a good pair of shoes for you?

(Penshoppe) has a pair here, actually. Black. Suede. You can wear them with anything. I like things that aren’t too specific because it will drive me crazy. I like to have things that I can just pick up. I stick with browns and blacks. I avoid whites and yellows and reds. I like simple colors that I can dress up or dress down. So, shoes, that’s a key.

Primary colors for the shirt. Blue or white shirt. You can’t go wrong. Navy is a great color, I like navy as well. Shoes, shirt and… maybe some sort of jacket. Are you talking red carpet here? Or anything?

I should probably say pants. (Laughs)

I was waiting for underwear.

(Laughs) I thought you were asking about red carpet-wise. Daily, I would say sneakers, pants and a T-shirt.

Is there anything you’d never wear?

Is it true that you used to model as a baby?

I did. I started when I was about four or five. My first thing was Burberry and then Versace with Bruce Weber.

When did you realize you wanted to be an actor?

I’ve always admired music, too. The arts have always been a calling for me. It’s a great form of escapism, I’ve always found. It’s nice to go to the theater or put on the television or go to the movies and escape for two hours and realize that, one, my life’s not bad at all and, two, it’s just a great way to forget about the day and go into a different world. It’s better than doing drugs. (Laughs)

How has fame changed your life?

It hasn’t changed me. My life… I’ve become more busy. It’s been great to be given these opportunities. I’ve probably become harder working than I was previously. I realize that the biggest outcome is that life has become shorter. Time seems to have sped up and the anxiety that I get from that is pretty high.

What’s next for (your character) Daniel Grayson? Please tell us “Revenge” will be back for season three.

I don’t know if there’s going to be a third season. But it’s looking positive because the numbers have pretty much sustained and they definitely want to keep (us) on the air. I hope but I can’t guarantee that. What’s next for the character? You’ll see him, he starts up a relationship again with someone. But you probably already know that by now, there are some spoilers out there. I honestly don’t know where they’re going to take the character because if you see the finale, something big happens.

So there has to be a third season.

There should be because the story isn’t finished yet. I don’t know. You’ll find out. They’re either going to take him to the dark side, the really, really dark side or you know, keep him back from that. But I hope he goes, because you know, it’s always interesting to play something that’s not stereotypical.

On May 10, 16 days after this Super interview, ABC renewed “Revenge” for a third season.