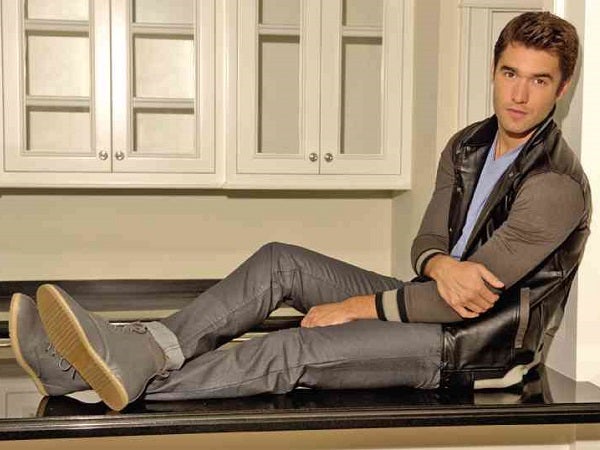 It was a scene straight out of the drama-mystery series “Revenge.”

An affluent neighborhood by the sea, giant waves crashing against the shore, and inside a beautiful, luxury beach house, the dashing character Daniel Grayson was walking towards us.

“Hi, we haven’t met. I’m Josh.” He grabbed our hand and shook it, his British accent snapping us out of our Emily Thorne fantasies.

We weren’t in the Hamptons, but in Malibu. It wasn’t Victoria Grayson’s darling son who was standing before us—but Joshua Bowman, the British actor who plays the rich and conflicted ex-party boy Daniel in the hit American primetime soap opera.

No, vengeance was not on the agenda.

Photographer Darren Tieste was shooting Josh for clothing brand Penshoppe’s latest promotional campaign. “It’s really nice shooting with Darren. I’ve heard a lot about him, we have mutual friends. He’s very fast. He just gets what he needs and it’s great,” said Josh.

Josh, whose recent film appearance was opposite Miley Cyrus in the comedy “So Undercover,” is the newest addition to Penshoppe’s roster of global superstars—a list that includes One Direction, Hollywood actors Ian Somerhalder and Leighton Meester, and Thai stars Mario Maurer and Baifern Pimchanok.

After injuries ended his brief career as a professional rugby player, Josh made his acting debut in 2007 in the Nickelodeon UK sitcom “Genie in the House.” He went on to study method acting in New York’s Lee Strasberg Institute and has had roles in films like “Prowl,” “Night Wolf,” “Exteriors,” “Love’s Kitchen” and TV shows “Myths” in the United Kingdom and “Make It or Break It” in the United States.

But it is, undeniably, his role in the deliciously scandalous “Revenge” that has been the most memorable so far. The show has had two successful seasons, spawning fan clubs, blogs, fan fiction and hordes of Daniel x Emily devotees.

It is also “Revenge” that brought Josh to the attention of Penshoppe.

“We watch the show ‘Revenge’ and Josh is a good Penshoppe guy. He suits us perfectly. We want the campaign to suit his personality—very stylish and laid-back,” said Jeff Bascon, Penshoppe brand director, who also handles two other Golden ABC brands, Oxygen and ForMe.

Jeff said that it took a long process before Penshoppe formally signed Josh: “But it was worth it. We’re happy we’re shooting him now. We’re very impressed. He’s got it. He’s working it.”

At that moment, Josh was working it barefoot, in a pair of mauve jeans and a gray tee stamped with “.ph” in big blue letters. “I wear this sort of casual street wear,” he said. “When my agent Laura came in with the offer from Penshoppe, I did my research and saw who else was doing it and saw that the clothes are similar to what I would wear, casual and slim-fitting. I thought I’d really really enjoy it.”

Josh seemed to be having a good time at the shoot, arriving 30 minutes early, picking his favorite pieces (“the polo shirt with the yellow in the collar and the half-leather varsity jacket, those have been my favorites”) and adding Filipino expressions like “hay naku” and “nakakaloka” to his vocabulary. He liked some of the clothes so much that he asked if he could keep them.

Jeff and the rest of team Penshoppe were happy that Josh was excited about the clothes, which the brand’s fans will be seeing in stores starting this month. Penshoppe’s Holiday 2013 collection will also be previewed today at its Philippine Fashion Week show at SMX.

Penshoppe has big plans for this year, with more surprises coming. “It’s going to be a fresher Penshoppe, very much on point when it comes to fashion. The focus won’t be just on the endorsers but more on the clothes, well-made, relevant clothes that can stand on their own,” Jeff said.