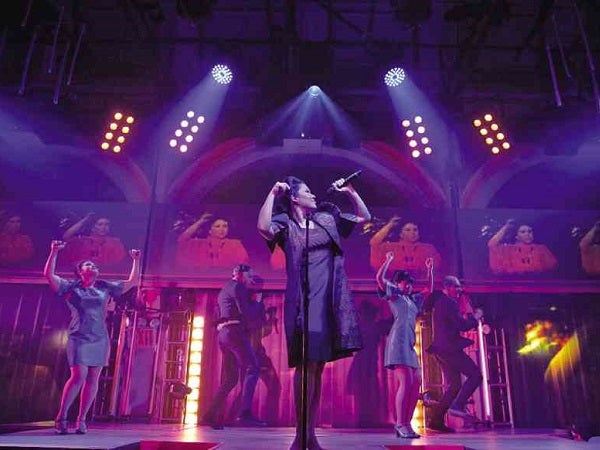 He was also the recipient of the 2013 Lucille Lortel Award for Outstanding Scenic Design and a nominee of Outstanding Costume Design for his work on “Wild With Happy” at The Public Theater.

Earlier this year, he also received the 2013 Independent Reviewers of New England Award for Best Costume Design for his work on the Huntington Theatre Company of Boston’s production of “Ma Rainey’s Black Bottom.”

Ramos has designed costumes and sets for numerous productions in New York, across the US and internationally.

“It’s been a great year so far. I got recognized for two disciplines that I am passionate about. It feels great,” he says via e-mail.

One of his current costume design credits is for the highly-acclaimed Off-Broadway musical “Here Lies Love.” Critics have lauded his work as “vast and fabulous” (New York Times), “[providing] beautiful symmetry” (The Hollywood Reporter), and “top-notch” (New York Magazine).

The cast of this musical about the life of Imelda Marcos performed a medley at the Obie Award ceremony at Webster Hall, New York. Show creators musician David Byrne and DJ/music producer Norman “Fatboy Slim” Cook also won an Obie for their music and lyrics. The show features Philippine-born actor Jose Llana in the role of Ferdinand Marcos.

Ramos is multi-awarded for his work. For his set designs he won the 2011 Craig Noel Award; for his costumes, the 2010 Lucille Lortel Award, 2009 Theatre Development Fund Irene Sharaff Young Master Award, 2008 American Theater Wing Henry Hewes Award, among others.

His recent New York credits include costume designs for “Volpone” at Red Bull Theater and “The Good Person of Szechuan” at Foundry Theater/The Public Theater.

Across the States, his recent design credits include the set design for Huntington Theater  Company’s “A Raisin in the Sun” (Boston) and sets and costumes for Arena Stage and Alley Theater’s “Mountaintop” (Washington, DC).

He designed costumes for Williamstown Theater Festival’s (Massachusetts) “The Elephant Man,” featuring Hollywood leading man Bradley Cooper in the titular role. The show will move to Broadway next year.

Other international production credits include those in London, Dublin, Stockholm, Bucharest, and Russia.

Ramos was born and raised in Cebu but relocated to Manila for college. He attended the University of the Philippines’ Theater Arts program with a major in Directing and minor in Design.

“But I designed most of my shows as well as those of my peers. I was really interested in the physical envelope in which the plays were placed,” he says.

DUP artistic director Alex Cortez says, “When Clint was a student, he was much ahead of his time! He is a stickler for details. In his early works as costume designer of ‘Mayor of Zalamea/Alcalde ng Zalamea’ and as a stylist of ‘M. Butterfly’ and “Noli Me Tangere,’ Clint showed a sense of artistry destined for bigger things!”

“Most of those shows were directed by [DUP founding artistic director] Tony Mabesa, whom I consider to be a great influence in my choice to pursue a life in the theater,” says Ramos.

After graduation, Ramos relocated to the US in the mid-90s. “Most of my professors were trained in the US and I just really wanted to have the same training. I never expected to stay.”

Ramos took up a Master of Fine Arts in Design for Stage and Film at New York University’s Tisch School of the Arts on a full scholarship.

He had a short stint doing designs for TV and film. “Just like in the Philippines, TV and film are more lucrative but I missed the theater, I missed the intimacy of the connections—both the audience and the collaborators.”

The IRNE Awards “recognize the extraordinary wealth of talent in the Boston theater.” The Obie Awards are given by The Village Voice newspaper to theater artists and groups in New York City for Off-Broadway and Off-Off-Broadway productions.

The Lucille Lortel Awards, named after actress-theater producer Lortel, are produced by the League of Off-Broadway Theatres and Producers. (The Antoinette Perry Award for Excellence in Theatre or Tony Awards cover Broadway productions.)

Within the industry, seating capacity is considered along with a production’s use of the pay scale of Actors’ Equity Association, the union of professional stage actors, as Off-Off-Broadway productions do not pay union scale.