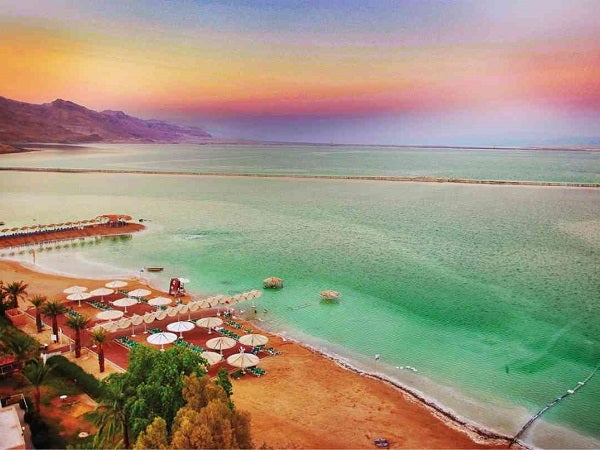 VIEW of the Dead Sea from author’s hotel room

You can’t sink in the Dead Sea

When I got an invitation to visit Israel, I honestly had mixed reactions. Instead of excitement, images of the Middle East conflict replayed in my head like a CNN broadcast. But the idea of tracing the path that Jesus Christ walked was on my bucket list.

Traveling to Israel was not as complicated as I imagined. Because there are so many overseas Filipino workers there, Israel signed a bilateral agreement with the Philippines, allowing Filipinos to visit its country without visas.

The most direct way to fly to Israel is via EL AL Airlines, to the city of Tel Aviv. The security check before boarding the plane is so tight, it may turn off some travelers. But it’s fine with me, because it gives me a sense of safety.

Upon landing at the Ben Gurion Airport, our group was whisked away by our host straight to Jerusalem. We checked in at the Leonardo Hotel, a famous chain of hotels there. I was so excited to see the sights that I immediately set out to explore the city on foot.

I ended up in the Ben Yehuda Street area. There I found a trove of shops and cafés filled with beautiful people. I loved it! It was like walking into a fashion magazine—men looking like D&G models, and the women like Victoria’s Secret endorsers.

Back at the hotel, our group was introduced to our guide for the next few days, Zivit Sari. Remember her name and e-mail ([email protected]), because I can’t imagine any better guide in Israel than her.

We were running late for our next stop, the Yad Vashem Holocaust Museum in Jerusalem. Here a guide explained the events that led to the Holocaust, the mass murder of some six million Jews during World War II. Hearing the stories and seeing the faces of people who suffered and died was so overpowering, I wept.

Movies such as “Schindler’s List,” “Sophie’s Choice” and “The Diary of Anne Frank” are, well, just movies. It’s completely different when you are seeing the faces and looking into helpless eyes. At the end of the visit, all I could think of was, never again, please God.

Our guide led us to the Children’s Memorial Hall where we were enveloped in darkness, and the only thing illuminating the hall were candles. Then we heard the names of children who perished in the Holocaust being read over the speakers. My heart broke, thinking of all the innocent lives lost.

Zivit said that, even if it brought grief, the museum was a good choice to start our visit to Israel, as it gave us a proper perspective on how the nation sees itself.

On the way home, we passed by the market, the best place to be introduced to the people of any country, I believe.  The first thing that caught my eye at Mahane Yehuda Market were the numerous fruit juice stalls.  There was also an abundance of sweets and freshly baked breads.

A good night’s sleep will do wonders to keep the mind and body alert for the next day. First stop was the Garden of Gethsemane, the famous olive garden where Jesus prayed and was betrayed by Judas. Inside the compound was a church, which housed the very stone where He prayed—a fact proven accurate by the research of both historians and archeologists.

We entered the walled city and went straight to Via Dolorosa, the way of the cross. Its literal translation: Way of Suffering. Zivit pointed out a handprint on the wall, where Jesus supposedly used his hand to support himself up.

As we retraced His steps, we encountered numerous pilgrims reenacting the Way of the Cross, complete with a huge wooden cross on their shoulders.  I was glad Zivit was there to guide us through the maze-like interior of the city, or we would all have gotten lost.

As I was about to kneel while making the Sign of the Cross, we were asked to move along.  I didn’t even get into a full kneeling position!

There was the rock where Jesus was laid after the crucifixion.  People were kneeling and placing objects on top of the rock, wiping it, kissing it. Word of advice: Once you find yourself there, prepare for the long line, the 10-second time limit, and the hordes of pilgrims and tourists.

Zivit led us in the direction of the Wailing Wall. I noticed a lively group of people dancing and singing; it was the day for a  bar mitzvah, the ceremony when a boy comes of age at  13 and is recognized by Jewish tradition as having the same rights as a full-grown man—a male version of a debut. The mood was so contagious that I found my companions dancing to the music, too.

The Wailing Wall is the famous landmark in the Old City where pilgrims and tourists leave prayer notes on the wall for special petitions.  I decided to simply fold my prayer note and looked for a space to place it on the wall. I wish I had more time to figure out what was going on around me, because I felt there was so much I needed to know.

Did you know that the Dead Sea is the lowest point on the planet? To be precise, it is 420 meters below sea level; they fondly call it the dimple of the planet. That was where we headed after lunch.

As we arrived in our hotel, I quickly changed into my shorts because the beach closes at 6:45 p.m. to keep tourists safe.  I found out why the hard way, and I was just glad other people were there to help me.

I was excited as I approached the shore. I noticed people in mudpacks walking, some bringing their own chairs to the water. I went in the water and slowly got acclimatized to the warm temperature. The best way I can    describe this is like taking a salt bath in my bathtub.

I then tried to sit with the water level just reaching my chest. That’s when it happened. It felt like there was some kind of force pushing me up. I couldn’t, for the life of me, sit down. So that’s how it feels when you can’t sink in the Dead Sea.

Water from the Dead Sea getting in your eyes isn’t a wonderful experience. It hurt like hell! It was a good thing Zivit had bottled water nearby, and she offered to guide me out of the water (because I was literally blinded) so I could rinse the salt out of my eyes.  I eventually returned to the water to float and pretend nothing happened.

The next day we gathered for an early start to the historic Masada Fortress. The fortress was built on top of a huge rock plateau by King Herod. We reached the top of the fortress via cable car. Normally, Israeli students would walk up to the fortress using the snake path. I didn’t have the luxury of time or youth to do the same.

After Masada, we headed for Tel Aviv and checked in at the Alexander Hotel,  a boutique hotel that I just loved. The next day we headed for Haifa City.

After deserts and dry landscapes, Haifa was a good break. It’s greener and cooler than all the other places, and turned out to be a sister city of Manila. We went to the Baha’i Gardens, which boasts the best view of the city.

In a nutshell, Haifa is like the Silicon Valley of Israel. Here they have all the companies developing new technology for the future.

The most surreal moment of that trip, however, was when we passed rows and rows of banana trees in the desert. My mind couldn’t reconcile the fact that a tropical fruit was growing in the sand. At the agro studies center, we got to meet the Filipino scholars studying there.

Finally, to cap our whole adventure, our host found it fitting that we spend our last two days in Tel Aviv, which is very modern, young and hip, compared to the more traditional and conservative places we visited earlier. No wonder Madonna loves this place and even had her concert here.

Tel Aviv also reminds me of Hawaii, where most of its denizens’ lives revolve around the beach. When I finally did get to the beach, I had to pretend I wasn’t ogling at everybody who walked by. I think God gave Tel Aviv extra servings of beautiful people.

All the cafés, restaurants and even kiosks serve tasty, scrumptious food to die for. I tried not to eat, thinking I would miraculously turn into a model with six-pack abs.

One of the most unforgettable nights I had in the city was when our host invited me to watch the Mayumana show. I had heard so much about this group. The Mayumana Theater can’t be described in one word, because it is a show like no other. The show combines dance, performance art, audience participation and music like no other. Visit their website, mayumana.com, and watch the videos on YouTube to see more of what I am talking about. At the end of the show, no one from the audience wanted to leave.

On the last night of my stay in this lovely city, I walked leisurely in the Old City of Jaffa, taking in the scenery, the food and its lovely people. I simply didn’t want it to end.

This trip would not have been possible without Ambassador Manashe Bar On of the Israel embassy and Yaniv Revach, deputy chief of mission. To you I say, shalom and toda, peace and thank you.

For more information, e-mail me at [email protected], or follow me on Twitter @raymundisaac. More details in my Tumblr at raymundisaacblog.tumblr.com, and check out more pics in my Instagram @raymundisaac.