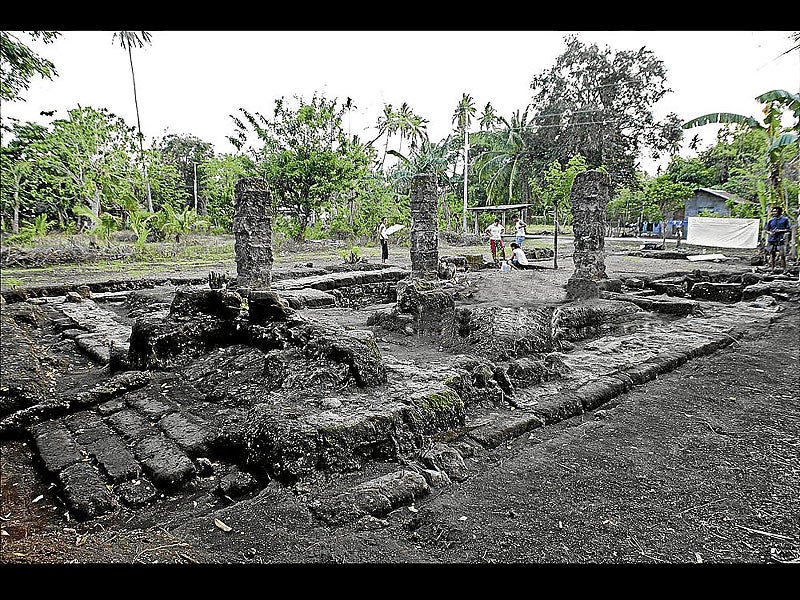 Spanish-era stone houses see the light of day once more 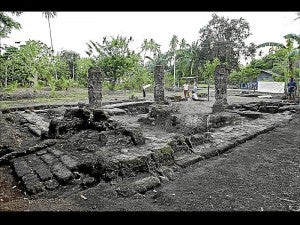 From the name “Pinagbayanan,” which means “where the former town once stood,” Barangay Pinagbayanan was the former town proper of San Juan, Batangas in 1848, when San Juan was first recognized as a separate municipality in Batangas.

Following the design of early Spanish colonies, Pinagbayanan once had a church and a municipal hall, whose ruins are still present today, with the old church even being acknowledged as a National Historical Site by the National Historical Institute. However, due to persistent flooding starting from 1883, as stated in original Spanish documents, the town proper was moved to Calit-Calit, the current Poblacion, in 1890, leaving only remnants of the original town.

Among the ruins that were remnants of the old town were two stone structures that were likely to have been Spanish-era stone houses. For the past two field seasons (2009 and 2010), Structure A, whose foundations were constructed mainly of adobe blocks, was excavated, revealing methods of and materials for construction.

This year, the second structure, located 40 meters south of Structure A and owned by Dr. Edgardo de Villa Salud, was excavated. Structure B, with a National Museum of the Philippines site code IV-2009-G, with visible positive features such as walls and pillars that delineate the entirety of the structure’s foundations after decades of abandonment, remains in the collective consciousness of the community. 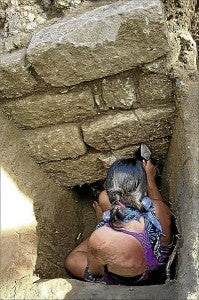 With a 16-member excavation team composed of graduate students, senior volunteers, and spearheaded by Dr. Grace Barretto-Tesoro from the UP-ASP, four trenches initially uncovered Structure B’s foundations, until finally exposing the entirety of its boundaries.

Crucial to this excavation was the identification of Structure B’s main entrance and the unearthing of its foundations to reveal the construction technology and materials.

Conglomerate pavement blocks which resembled a pathway leading to two possible entrances were revealed in the structures northwestern and northeastern sections.

As evidenced by cement and lime mortar fillings on the possible opening, this entrance was later blocked. Since both entrances were directly adjacent to each other, the latter entrance may have been sealed due to local beliefs that bad luck shall prevail over the residents of the house. 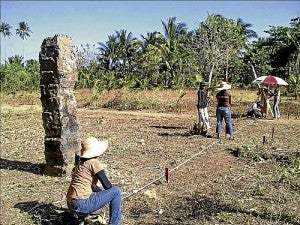 Elderly townsfolks narrate that the structure had already been abandoned prior to the town’s Japanese occupation, and had been frequented by Japanese soldiers who were stationed in a nearby Japanese garrison further east of the site during the early 1940s.

The house had remained intact until the end of World War II. In the mid-1940s until the 1960s, when mulawin posts were removed, interior and exterior walls were demolished due to the collection of the adobe blocks that were recycled for the construction of fishponds.

In the 1960s, locals remember that the site had been looted. This had been verified by the numerous pits uncovered at the structure’s southeastern portion, yielding a very high concentration of artifacts such as metal fragments, porcelain sherds, earthenware shards, glass shards  and modern materials such as plastic.

The UP-ASP would like to acknowledge the following people for their invaluable support and service to the 2011 fieldschool: Dr. Edgardo de Villa Salud for granting access to his property; the residents of Barangay Pinagbayanan who patiently answered questions about the local history; and the UP-Office of the Vice Chancellor for Research and Development  for funding this project.

To culminate the excavation of Barangay Pinagbayanan San Juan, Batangas, the UP-ASP shall hold an exhibit at the 1st Floor of Palma Hall at the University of the Philippines- Diliman on Sept. 5-9. Call the author at 0932-6952264 or visit www.batangasfieldschool.wordpress.com.