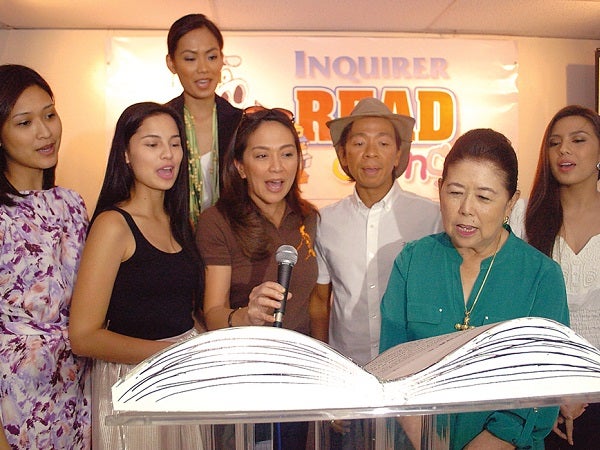 Read-Along at 6 picks celebs as ambassadors

MANILA, Philippines—The Inquirer Read-Along on Saturday marked its sixth year by training master storytellers and honoring celebrity readers in a daylong affair that gathered children ages 7 to 12 at the Inquirer office in Makati City.

The celebration’s main event was twofold: coaching the first batch of “champions” to become Read-Along storytellers and organizers in their communities; and introducing the program’s first “ambassadors”— celebrity readers who have regaled children in the past with their engaging storytelling.

Launched in May 2007 by the Inquirer Research department and Junior Inquirer, the Read-Along program brings together children for story-reading sessions with celebrities, famous role models for the youth and achievers in their respective fields. Since then, the team has conducted more than 250 sessions with more than 16,000 children and over 300 celebrity readers.

In the afternoon, Prats read the book “The Gift” by Gidget Roceles Jimenez, which is part of the Great Men and Women of Asia-Children’s Series published by Ramon Magsaysay Award Foundation. It tells the story of Ramon Magsaysay awardee for public service Prateep Ungsongtham-Hata, who was cited in 1978 for bringing the gift of reading, learning, better health and hope to impoverished children in Thailand.

Rodriguez read “The Kingdom of No Stories” by Mary Ann Ordinario-Floresta, published by ABC Educational Development Center, which tells about a king who bans stories in his kingdom and about a young girl who bravely writes stories and helps bring about change.

Roxas and Esporna read “Ang Magkaibigan” by Angelita Aragon, a story about the friendship of a dove and an ant.

“I really enjoyed reading to the kids, and the story I read was inspiring. I am happy that the kids seemed to enjoy the storytelling, and I hope that they were inspired by it as well,” said Prats, who appears on GMA shows “Mars” and “Bukod Kang Pinagpala.”

The mother to 5-year-old son Nathan explained that while it was her first time to read to kids “in this kind of venue,” she has already some storytelling experience with children.

“I read to my son most of the time and as a school owner, I also get an opportunity to read to children,” said Prats, who opened Divine Angels Montessori in Cainta in 2008.

“I think education is very important that is why I support projects like the Read-Along. I think the best gift anyone can give to someone is education and not everyone is given that opportunity,” the actress said.

Both neophyte storytellers, 20-year-old Esporna and 18-year-old Roxas said they were “shocked” to hear that they would be the top participants of the workshop.

“I don’t really have any experience in this kind of activity before, but maybe my training as a part of a theater group helped me in the workshop,” Esporna said.

Roxas, meanwhile, said both of them were used to working with children through their parish’s youth ministry.

The newly trained storytellers, who traveled all the way from Nueva Ecija, said they would use what they have learned from the workshop in their work in outreach programs.

One of the kids in the audience, Marisol Blancaflor, said her favorite story was “Ang Magkaibigan,” where she learned about the value of lending a helping hand.

Twelve-year-old Camille Medrano said she loved the story “Kingdom with No Stories” because the protagonist of the story was inspirational. “I learned that reading is very important if we want to achieve our dreams,” she added.

Like Medrano, Noel Olorosa’s favorite story was also “Kingdom with No Stories.” “I admired the girl in the story because she wanted other children to learn how to read, too,” he said.