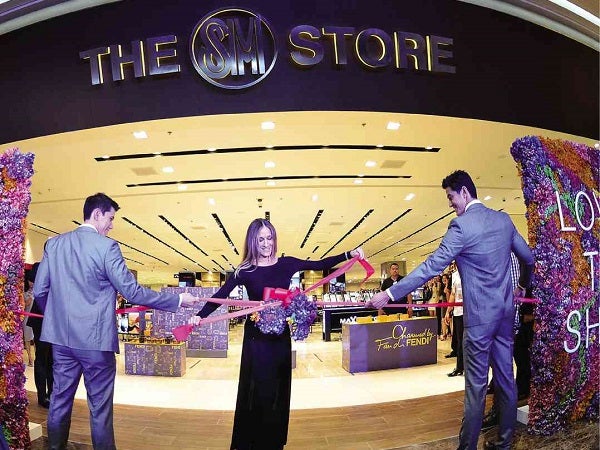 It’s amazing how a single location can have multiple grand launches with big international stars and the hottest local show-biz celebrities around, and all this can happen on the same day.

But then it’s not every day that an SM Aura Premier is launched. Indeed, the opening of SM Aura Premier, the newest landmark in bustling Bonifacio Global City, can only be described as colossal. International movie star Sarah Jessica Parker was the guest of honor, as she is the new face and style of SM Store. Her presence alone meant that the SM Aura launch was to be a cut above the usual.

I heard SJP’s name being announced as I entered the new luxury mall—which meant I was running late again. I rushed to the SM Supermarket on the Ground Level, as I was committed to be part of that ribbon-cutting. Already lined up with scissors in hand were SM mall magnate Henry Sy Sr. and his endearing wife Felicidad, winning power couple Sen. Alan Peter Cayetano and his lovely wife Taguig City Mayor Laarni Lopez-Cayetano, newly elected Councilor Lino Cayetano, and my fave hunk superstar Dingdong Dantes.

After the ceremony, SM Supermarket head Herbert Sy led us to the impressive fresh produce section, featuring a wide array of fruits and vegetables. Fruits from all over the world are flown in throughout the week. There is even a section for hydroponic vegetables and organic greens, kept fresh with water misters.

I checked the frozen delights section and was happy to spot the Magnum Ice Cream Bar freezer loaded with the latest flavors of the deliciously sinful bars. Further down the aisles, Breeze laundry detergent with ActivBleach also has its own stand next to the Beauty & Wellness Section.

Right after my quick tour of SM Supermarket, I was ready for my next ribbon-cutting ceremony: Watsons. I didn’t need to walk far, as Watsons is right next to the Supermarket. The brightly lit and organized store was all ready, with GM Robert Sun and co-brand ambassador Mikael Daez poised to snip. Mikael and I promote the store’s Switch and Save campaign, which helps make Watsons the No. 1 pharmacy in Asia.

After two ceremonies, I was desperately seeking Sarah. I walked through the mall, admiring its striking, flowing interior lines. The modern and luxury look is brilliantly executed all throughout the 25-hectare, mixed-use complex.

I fetched my daughter Athena at the Toy Kingdom store, and we headed to SMX Aura, the mall’s exhibition center. On the way, I dropped by the opening ceremonies of Kultura Filipino, L’Indochine and SM Accessories inside SM Store. Selling decorative and fashion items from Asia, L’Indochine has the coolest accessories for the home with a touch of whimsical tones. GMA newscaster Vicky Morales and basketball heartthrob Chris Tiu were there shopping.

Upon reaching the Center, I was just in time for the formal presentation of SJP as the new SM Store endorser. Her “Love to Shop” campaign was done in just a couple of days and was well-received by all the guests.

Unfortunately, I didn’t have a chance to have a photo with SJP, but I was thrilled to see her walk by the newly opened Paul Boulangerie, the French bakery of Bench king Ben Chan.

I screamed her name and she looked at me and said, “You look amazing!” And why not, as I was wearing a Rajo Laurel bright-yellow gown with semi-precious stones. Rajo himself had more SJP time, as he and restaurateur Malu Gamboa hosted the star to a day of authentic Filipino hospitality topped with a kamayan-style meal at Dampa sa SM MOA.

As if one night with the “Sex and the City” goddess was not enough, Rajo was with her again the following evening to celebrate his birthday. He also had a double celebration for his birthday and his 20th anniversary in the fashion industry.

All of Rajo’s muses, including Inquirer’s Leica Carpo who just flew in for the event, were present. Rajo had Leica in a sexy, black, beaded gown, while I wore a voluminous straw gown.

Leica’s visit was also due to Philippine Fashion Week Holiday 2013, which opened this week at SMX in MOA. The SM Store featured SM Ladies Fashion and Parisian, its signature shoe collection.

Walking down the ramp for SM Store were fashion celebrities Ruffa Gutierrez, Ingrid Chua-Go and Divine Lee. Divine was simply divine in a sexy, lime-green swimsuit. SM VP for Marketing Millie Dizon told me it’s cool to “Love to Shop” at the SM Store.

Right after the show, direk Ariel Lozada prepared the hall for the collection of Michael Cinco. The spectacular collection was breathtaking and unmistakably Michael with all the encrusted Swarovski jewels and intricate beadwork.

I haven’t seen Michael since he did the Red Charity Gala last year, and his current show was spectacular. Seeing him excited me to fire up the planning for the upcoming Red Charity Gala, where co-producer Kaye Tinga and I will be featuring another Dubai-based designer, Ezra Santos.

Jag Origins is a fashion advocacy program by the iconic denim brand to promote creative fashion thinking among the country’s design students.

Bench/Body will be featuring Paolo Roldan and a giant cast of celebrities. Albert’s collection will surely be a beautiful one, and I am so excited to be wearing his masterpieces soon.