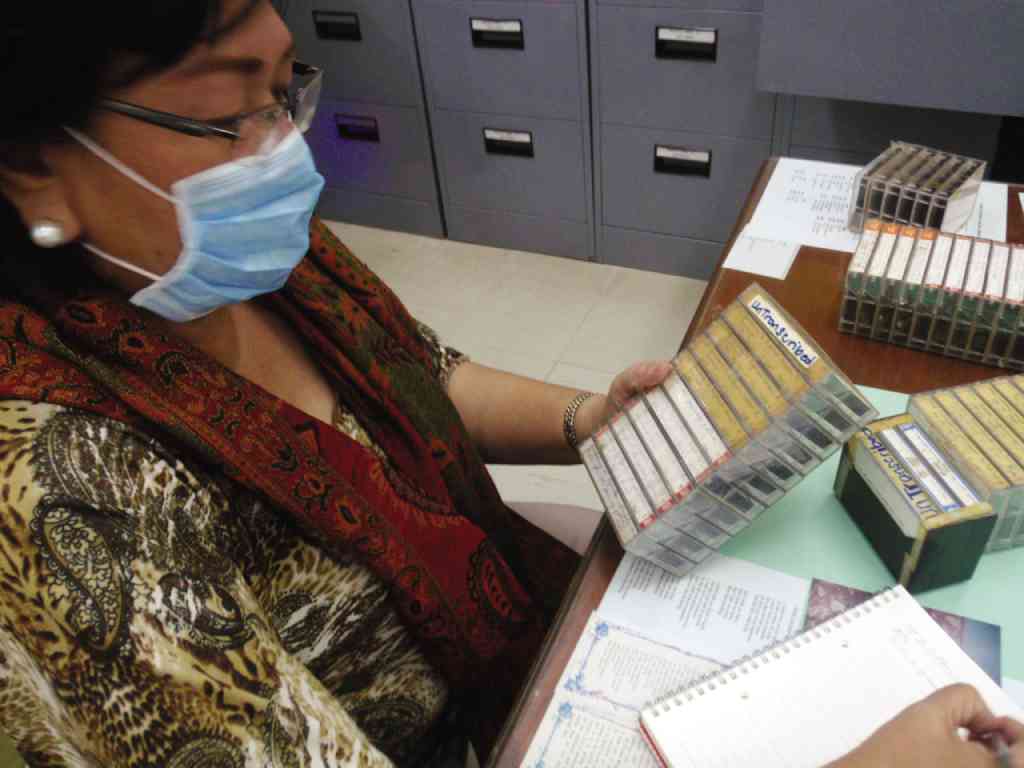 THE AUTHOR inventorying the cassette tapes inwhich the Manobo epic, as chanted by indigenous singers, was recorded.

Rescuing a people’s memory: The race to conserve the Manobo epic

DUMAGUETE CITY—Waiting to be assessed are 359 untranscribed cassette tapes for digitization, and seven reel tapes, 343 audio tapes, and four boxes of floppy discs on the Ulahingan, a major epic of Mindanao.

Time is of the essence, pardon the cliché.

The condition of the tapes must be checked by experts soonest before these can possibly be digitized. And only then can transcription of these tapes and with it, the memories they contain, can be transliterated and versified close to the original way the chanter uttered them, and published in print or as e-books for posterity.

These must be addressed now even as other scholars can continue the validation, transliteration, versification, styling, and the analysis of the tons of data of what had been collected since 1963 by the late Dr. Elena G. Maquiso of Silliman University. The collection has been alternately funded by Silliman, Toyota Foundation, National Commission for Culture and the Arts (NCCA), Institute for Religion and Culture of the Philippines, Vereinigti Evangelische Mission of Germany and other donors.

The progression and preservation of the materials from the field work carried out by Maquiso for much of her remaining 34 years paralleled the advances of the technology available to preserve a nation’s heritage, in this sense, the culture and arts of the Arumanen-Livunganen Manobo of North Cotabato, and parts of Bukidnon and Davao.

Upon the behest of Silliman University president Dr. Ben S. Malayang III, I  returned to my alma mater on May 7-8 to help revive interest in the Ulahingan Research Project.

Beginning the collaborative project between Silliman and the MSU-Iligan Institute of Technology, where I am based, I held discussions with Silliman’s director for research, Enrique “Ike” Oracion; director for extension, Fred Cadelina; and the historian, dean Carlos “Jun” Magtolis.

Several Silliman scholars have written papers or theses about the Ulahingan project. My own son Rex did an undergraduate thesis on the imagery of an episode of the Ulahingan. The studies are at the library.

At the library, chief librarian Lorna Yso ushered me to the Filipiniana Section where I did an inventory of the library holdings of the Ulahingan. She later accompanied me to the university’s Instructive Media and Technology Center for consultations on the digitization of the existing Ulahingan  tapes.

I saw the original, transcribed and edited manuscripts and numerous tapes even as several tapes of untranscribed recordings on the Ulahingan had been hidden for years in the library’s steel cabinets, I realized that a sixth volume, “Slavery & Freedom,” was published in 2010 by history professor Earl Jude Cleope, 15 years after Maquiso’s passing in 1995.

Scholars, some of them foreigners, researchers, artists and writers, including the late National Artist for Literature Dr. Edith L. Tiempo, as well as members of religious orders doing research, had been involved one way or the other in the Ulahingan Research Project directed by the university’s Research Office.

At the library, I couldn’t help but appreciate traces of affection in the way each tape, reel or cassette was labeled by hand by researchers of the Ulahingan Research Project and, in particular, the then Filipiniana Section head Selah Golosino, Maquiso’s niece.

Golosino, according to Magtolis, had retrieved what  were left of the manuscripts and tapes that had been neglected after Maquiso’s death.

Handwritten information attached to the tapes yielded interesting information.  For instance, on the recorded episode “The Small Boy Versus Crocodile” by Sarmiento (Welu) Mampendaupan revealed that the chanter died in July 1990, five days after recording the episode in Gavasan, Carmen, Cotabato. Hence, he could not collect payment for his services.

A note on the episode “Diwata at the River Mouth of Matampey,” recorded in Apangen, Livunganen, Cotabato, and transcribed by Gobalia Silay, had a note that promised to pay the chanter P1,100 for singing 4,400 lines at P0.25 per line “in March 1990.”

The Mindanao epic, the Darangen of the Maranaos of Lanao, is now on the Unesco Representative List of the Intangible Heritage of Humanity. Perhaps, the longest epic from Mindanao, the Ulahingan of the Livunganen-Arumanen Manobo which has, on average, 4,000-6,000 lines per episode and with 79 episodes, must be included in the Unesco list as well.

While doing her doctorate work, Maquiso got wind of the Ulahingan from then Divinity School student, now reverend, Samoan Bangcas in 1961. Initially, Maquiso was interested only in the music aspect of the study, but later on she embarked on a holistic study of the Ulahingan and published the first volume in 1977, the second in 1990, the third in 1992, the fourth and fifth volumes in 1993 and 1994, respectively, and, in 2010, volume 6 by Cleope. Ten volumes were planned but only six by far have been published.

The fourth volume published by Maquiso recorded the 17,653-line Kepu’unpu’un (prologue) that narrates the “Creation,” “Care for Humankind,” and the “First Human Community, “by the tala’ulahingan (singer) Gobalia Silay and transliterated by singer Abraham Saliling. More Creation stories by singers Pasid Mampayanang, Cayog Mangcambat, Lumabao Angcondem and Subidan Ginta’Us dwelt on variations of the same theme on creation and divinity, embellishing the main creation story based on their creativity and narrative skills.

The Ulahingan, according to Maquiso, is like a clump of bamboo. It has two parts: the Kepu’unpu’un, or origins and metaphor for “roots,” and the sengedurug, or branches or other stories related to Agyu. It is said the Ulahingan is a never-ending story for as long as there are singers.

Fictionist Leoncio P. Deriada said the Ulahingan is “so huge,” its study can hardly be exhausted and, therefore, it affords plenty of room for the keen scholar or creative writer to study and exploit. In 1978, Deriada wrote the play “Rudsu-an” (The Beginning) based on the Ulahingan prologue alone. This was staged at Woodward Little Theater and the play was directed by Amiel Leonardia.

Since then, several more theses and papers written by Silliman scholars have been published based on the Ulahingan. If the genealogy and the ethno-historic data from the Ulahingan can be generally known, perhaps ramifications on the kinship of certain groups such as the lumad and the Islamized could be traced. Present-day conflicts may also be minimized.

Today, no one, it seems, is really interested in epics, which are relegated to the background by other genres such as the novel, film, animé or manga (comics), to which the epic, in all intents and purposes, gave birth.

One problem regarding the Mindanao epic’s lack of popularity is that they are ethno-epics and not national epics, compared to Homer’s “Iliad” and “Odyssey,” Germany’s “Niebelungenlied,” the Anglo-Saxon “Beowulf,” Ferdowsi’s “Shaname,” and Miguel Angel Asturias’ “Men of Maize.”

Another major problem is that, because rare, they are kept in special collections in the Filipiniana sections of libraries. And because the collections are for scholarship, they are not accessible to the regular student.

Maquiso has done much for the Ulahingan.  But more needs to be done and fast.  It is time to analyze, validate and popularize the Ulahingan.

The West and its commercial entertainment industries have recreated or reinvented fairy tales, to suit contemporary audiences. For example, “Snow White” has been reinvented in  “Mirror, Mirror,” “Snow White: The Huntsman,” and “Once Upon a Time,” and other movies. Perhaps our mass media outlets should do likewise regarding our epics and folklore.

Our own scholars, cultural anthropologists, historians, sociologists, writers and artists must help propagate the legacy of the Livunganen-Arumanen Manobo. Let the words of their revered chanters bring back to life the world of their ancestors, a world which forms part of the mosaic of Philippine culture and arts.