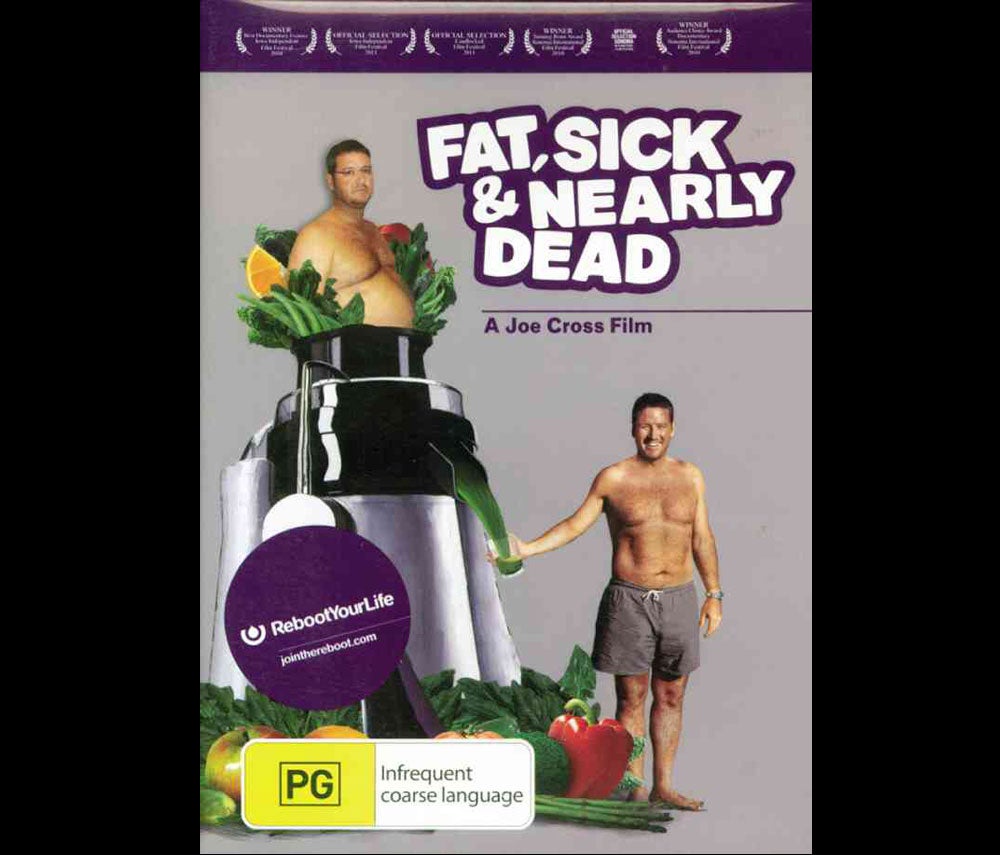 How juicing saved his life

Joe Cross, a financially successful Australian in his early 40s, was burdened with a serious health problem: he was overweight by 100 pounds, and for nine years had been taking medication for an autoimmune disease.

Tired of swallowing pills and worried that he’d soon end up dead, most probably from a heart attack, Joe challenged himself to lose weight the natural way—by drinking a juice recipe of vegetables and fruits for 60 days and documented it on film.

The result, as captured in the documentary “Fat, Sick and Nearly Dead,” is so inspiring that viewers are likely to follow Joe’s lead. First released in 2010, the film won the Best Documentary Feature in the Iowa Independent Film Festival, the Turning Point Award and the Audience Choice Award in the Sonoma International Film Festival, all in the same year.

Although it got mixed reviews—the negative ones saying it’s simply self-promotion—the main message of Joe’s film is not just about juice diets, but maintaining a balanced lifestyle to achieve good health.

Joe is in Manila to help promote “Fat, Sick and Nearly Dead,” which will be shown starting today in several Metro Manila theaters. Recently, he granted Inquirer Lifestyle an exclusive e-mail interview.

In the film, you said you used to eat two whole pizzas. What other foods did you indulge in before you decided enough was enough?

From the time I was a boy, I had a serious sweet tooth and would eat more than my fill of lollies, breakfast cereal and baked treats, and wash it all down with Coca-Cola. But I also loved fast-food hamburgers and fries, and basically anything fried. What I never indulged in were fruits and vegetables—and happily, now I can’t get enough of them.

Your parents also said that you ate a lot even as a child, but you started gaining weight only when you were working in the stock market. How do you explain that?

Principally, I was on my own as an adult, and even though I had always been prone to overeating, I no longer had any mechanism to regulate what I ate—so the brakes were really off the car at that point!

Second, I didn’t have the institutionalized, organized exercise that you get as an active kid who plays rugby or footie at school—and the absence of exercise didn’t help.

Third, I was under lots of pressure in a high-stakes job, and I probably turned to food as support. And finally, like everyone, my metabolism started to slow down after my teenage years.

You used to get into a fruit and veggie diet but eventually went back to your old ways. Was it because your willpower to lose weight was not strong enough?

I think it was because I didn’t realize how high the stakes were. When I turned 40 and looked in the mirror, I really understood that I had spent decades making choices that were going to end my life prematurely. And that scared the dickens  out of me—let me tell you, fear is a powerful motivator!

How did you learn about the juice diet?

I had tried it before in a limited way, but I worked with several doctors to create the plan I followed. The premise was less about “juicing” and more about getting massive amounts of fruits and vegetables into my system as quickly as possible while cutting off the supply of processed food—and there’s no better way to do that than juicing, in my opinion!

Was there a detailed plan (daily menu, specific fruits and veggies) before you started doing it?

I created one with Dr. Joel Fuhrman, director of research of the US Nutritional Research Foundation. But after a few days and as I got more comfortable with juicing, I started to experiment and get creative.

Was doing a documentary on your 60-day juice diet the primary motivator for you to succeed?

The motivation for my success was literally to save my life. But I reckon having a camera crew around will keep you honest!

In your website, it is mentioned that it is not required of everyone to do a 60-day juice fast. Why did you go to the extreme?

I had an extreme problem—an excess 100 lbs, an autoimmune disease and daily doses of powerful and debilitating drugs—so I chose a pretty extreme solution. But I now “reboot” every few months or so for five to 15 days and that is enough to keep me on track, now that I have restored my baseline health.

In the film, it is noted that you started losing weight as early as the first or second week of your juice fast. What difficulties or challenges did you encounter as the days went on?

The first few days were tough, since my system was detoxing and my brain was grappling with letting go of so many habits and “crutches” that I relied on during times of stress. Since then, I’ve learned more about how to prepare for a period of juicing, and I provide people doing a reboot with lots of information—like weaning yourself off processed foods and animal products before you begin.

But truly, after the first five days, which were tough, everything became very effortless, and the results were so positive that I was motivated to continue.

You have gone back to a solid food diet and only do a juice fast every three months for 10-15 days. Does that mean you’re back to eating meat again?

Very sparingly—every few months, I might get a hankering for a bit of steak and if I do, I will eat it. What is great is that I no longer really want it. The cravings I was afraid of when I started this journey just simply aren’t there.

Would you recommend juice fasting even for children?

No, children have special dietary needs and require a very balanced diet to grow and be strong! However, I think that adding a fresh juice of vegetables and fruits to their diet is a great way to enhance their nutrient intake.

What’s the greatest thing you learned from your juice fast, aside from the insight that the body can heal itself?

The power of community and communication. The help and encouragement I received from friends and family was so crucial to my success, and I have been trying to pass that along to people around the world. I get hundreds of stories of personal triumphs every day and one of the key factors that people cite is that they had a friend, or family member, or were on our online community and received encouragement. I believe, with the right information and a healthy amount of support, incredible change is possible. I’m living proof!

“Fat, Sick and Nearly Dead” will be screened today at Newport Cinema 3 of Resorts World Manila; tomorrow at Cinema 3, Gateway Mall; and May 31, Cinema 3, Shangri-La Plaza. All screenings are at 6:30 p.m. For free tickets, log on to breville.com.ph/joe-cross-in-manila

I USED TO be skinny, but gained weight in recent years due to an increased appetite, coupled with drinking alcohol regularly, especially after work assignments. I used to do brisk walking for exercise, but it got rare due to the long nights out (going to bed at 4 a.m. was the norm), which made waking up early an arduous task.

The sight of a bulging tummy bothered me, and the sharp, creeping pain in my chest that I occasionally felt gave me the creeps.

After watching a DVD copy of “Fat, Sick and Nearly Dead,” I thought of trying the juice diet, which consists of three kinds of vegetables and two fruits to be put in a juicer and drunk the whole day, without any solid food.

With a blender, which used to mash my son’s food when he was a baby, I started taking only juice for meals last May 6. I would “cheat” once in a while with the soup of sinigang na bangus or a serving of pinakbet. But generally, it was just juice that I had for breakfast and which I also brought to the office in two one-liter jugs, kept in the ref and drunk for lunch and dinner or every time I felt hungry.

In the first few days, I lost 10 lbs, followed by another five pounds within a 12-day period. The most wondrous thing was that I never felt weak; on the contrary, my energy was at an all-time high during those 12 days, my mind very much alert to the demands of editing and writing stories late into the night.

Now I like what I see in the mirror: no more puffy face and no protruding tummy, either. My waistline shrunk by at least two inches, so I have to tighten my belt. Also, I got back to brisk walking and noticed that I don’t get tired at all.

It doesn’t mean, however, that I’m turning vegetarian. I had a few slices of beef steak a few days ago, and I’m looking forward to having a bite of the roast pork belly at Resorts World. I’m just following Joe Cross’ dictum, which is actually the universal maxim to living well: everything in moderation. Pocholo Concepcion