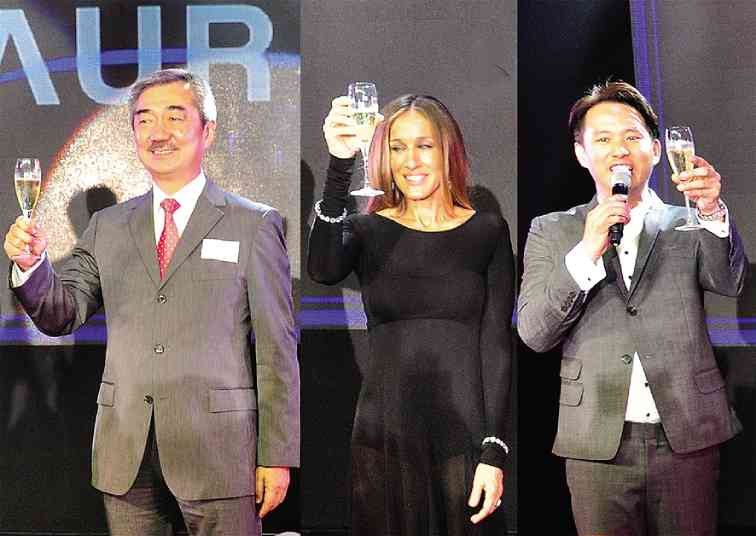 There was a palpable aura of elegance and impeccable style, dahlings, when the high society set turned up for the awesome launch of SM Aura Premier—the newest mall of the SM Group.

Located on 26th Street corner McKinley Parkway in the sprawling Bonifacio Global City in Taguig, SM Aura is a high-end destination aimed to redefine the retail and lifestyle scene in the country. An extra dash of glamour was the presence of Hollywood style icon of Sarah Jessica Parker, who flew in to grace the mall’s opening. She’s the face of SM Store, no less, palanggas.

SM Aura Premier is a distinguishing landmark for Taguig’s Central Business District, a fast flourishing “micro-city” where prestigious multinational and local corporations, as well as embassies, and cultural offices all maintain their Philippine headquarters.

Moi was told by my good friend Harley Sy of the SM Group that “SM Aura Premier derived its name by combining two exuberant chemical elements—gold, which has the symbol Au, and radium, the symbol of which is Ra. Putting them together means luxury and elegance. It is also worth noting that the chemical numbers of gold (79) and radium (88)—or 7, 8  and 9—are considered lucky and fortunate. This is what the mall wishes to attain with its business partners.”

Harley added: “With a floor area of 249,861 sq m, SM Aura Premier consists of a mall and office tower designed to stand out not only visually, but also with the well-planned architectural and operational highlights for the enjoyment of customers.”

Moi was agog at its breathtaking design—capturing the flow of water and the turbulence of air, brilliantly done by architect Willy Coscolluela who drew his inspiration from the elements of nature, dahlings.

“What sets SM Aura Premier apart is its commitment to sustainable design and development, and green architecture to reduce the structure’s carbon footprint. The SM Engineering Design and Development team enhanced it with sustainable operation: pollution and waste-management systems planned for maximum efficiency; a water-treatment facility to recycle water for non-potable use; a massive green roof to reduce the heat island effect in the structure; and international green standards to ensure the efficient use of energy and other resources,” explained Coscolluela.

Some of the classy global brands that have opened their first store in the country at SM Aura include Suiteblanco from Spain; Stefanel (Italy); BB Dakota (United States); J. Lindeberg (Sweden); and Farah Vintage (United Kingdom) for fashion, as well as Paul Boulangerie (France; the local franchise is owned by Ben Chan); NBA Café (US); and Todd English Food Hall (US) for dining.

The mall will also have the first of next- generation SM Stores, SM Supermarket, Kultura, Watsons, ACE Hardware, Toy Kingdom, Baby Company, SM Appliance Center, and the latest collections of Forever 21 and Uniqlo.

Other attractions include The Sky Park and its al fresco dining amid a cool, landscaped garden and soothing water; the Samsung Hall, an events place with a dome design set against a lush garden; and the Chapel of San Pedro Calungsod.

SMX Aura is a great place for exhibits and corporate meetings, with an office tower that addresses the needs of the international market, and the growing demands of the call center industry.

As for parking, the mall has 1,771 slots, including those for bicycles.

Yes, palanggas, SM Aura is an exceptional, manmade natural wonder of the Philippines.