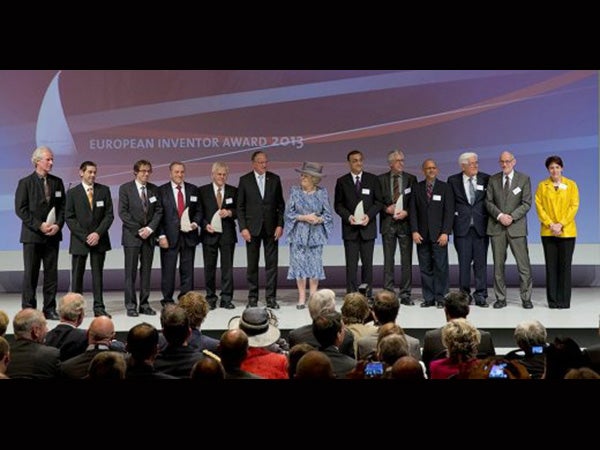 The winners of the European Inventor Award 2013 are presented with their trophies at a ceremony in Amsterdam on Tuesday, May 28, 2013. PHOTO FROM EPO.ORG

AMSTERDAM—The inventors of products ranging from kitchen drawers that close silently to hi-tech cancer-killing nano capsules were among those honored at the European Inventor Award on Tuesday.

Austrians Claus Haemmerle and Klaus Bruestle won the Industry category prize for their now ubiquitous damper system that allows drawers and cupboards around the world to close smoothly and silently.

Belgian-born Frenchman Patrick Couvreur and his team from the University of Paris-Sud won the Research prize for nano capsules that allow for less aggressive but more effective forms of targeted cancer therapy.

The tiny capsules are just one seventieth of the size of red blood cells and travel to the actual site of diseased cells to release their payload.

The Lifetime Achievement award went to Swiss physicist Martin Schadt, known as the “father of the pixe,l” who first applied to patent Liquid Crystal Displays (LCD) in 1970.

The annual event is organized by the European Patent Office (EPO), whose president Benoit Battistelli said the LCD “exemplifies the importance of patience, circumspection and long-term investment for the development of cutting-edge technology.”

“This breakthrough could not have been foreseen in the 1970s,” Schadt said.

“A mountain of technical and scientific difficulties first had to be overcome.”

Swedish professor Pal Nyren won in the small and medium enterprise category for a technique that has dramatically slashed the time and cost needed for DNA sequencing known as pyrosequencing.

The invention has revolutionized deciphering the genetic code: the entire DNA of a cell can now be read in just two months, compared to 13 years before, and at a fraction of the cost.

The competition has been running since 2006 and this year for the first time included a Popular Prize, awarded to Spanish engineer Jose Luis Lopez Gomez for another invention aimed at making the world run more smoothly.

Indian-born US researcher Ajay Bhatt won the “Non-European” award for heading the team at tech giant Intel that developed the Universal Serial Bus (USB) connection which all computer users today take for granted.

Bhatt became frustrated while installing a printer on his wife’s computer and came up with the idea of a connection interface that would recognize and run new devices automatically just by being plugged in.

The awards themselves consist of a small model of a sail and no cash.—Maude Brulard