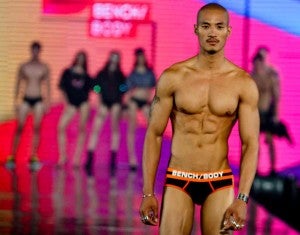 In contrast to its much-awaited biennial underwear shows, the most recent of which was staged last year at the Arena, the one held recently at SMX in Pasay City was  smaller and more intimate.

Devoid of showy and over-the-top costumes and sets, the show directed by Robby Carmona allowed guests to focus more on the models and the underwear. Except for Roldan and singer-actress Jennylyn Mercardo, the hardbodies who paraded down the ramp were relatively nameless mannequins and athletes.

There was good use of lighting and visual and graphic effects. The opening act was inspired—featuring dancers swinging and bending their bodies to echo lines and patterns projected on screen.

The same could be said of Roldan’s visual clones, which heralded the model’s grand entrance in the show’s finale.

Unlike in past shows, Bench’s in-house stylist Noel Manapat didn’t tap Middle East-based Filipino designers. This time he collaborated with Joey Samson and Ivarluski Aseron, who played with such materials as neoprene, lace and tightly woven nylon mesh to produce jackets, hoodies and overlays that complemented the underwear collection.

In the hands of Samson and Aseron, underwear fashion became high fashion. The show, which was divided into three segments such as street, urban and sports culture, had wearable separates.

nt easily stood out for its black-and-white oversized jackets with quilted and beaded details reminiscent of Balenciaga, with a touch or two of Chanel.

Since the collaboration, as Samson put it, was quite free-flowing, it was hard to pinpoint the person responsible for a look. On the two weeks the designers worked on the pieces based on Manapat’s directives, Manapat would constantly check on their progress.

On one visit, Manapat saw a piece Samson was working on for Roldan, a jacket with the model’s last name and assigned numbers spelled in beadwork. He liked the idea, and told the designer “to take it to the next level” by replicating the look for other models.

Thus, the beaded and sparkly detail found its way on the back of several black briefs.

“The effort wasn’t about our individual aesthetics as designers, but more about what Bench was trying to push based on its current underwear collection.” said Samson. “As always, it was fun working with Noel because he’s the kind who doesn’t limit what you should do.”

Samson considers Roldan as one of the “easiest models I’ve dealt with.”  Samson and his collaborators enjoyed their photo-ops with Roldan.

“He’s very quiet,” he said. “And he has the right proportions as a model. I’m not at all surprised that he was able to make a name for himself abroad.”