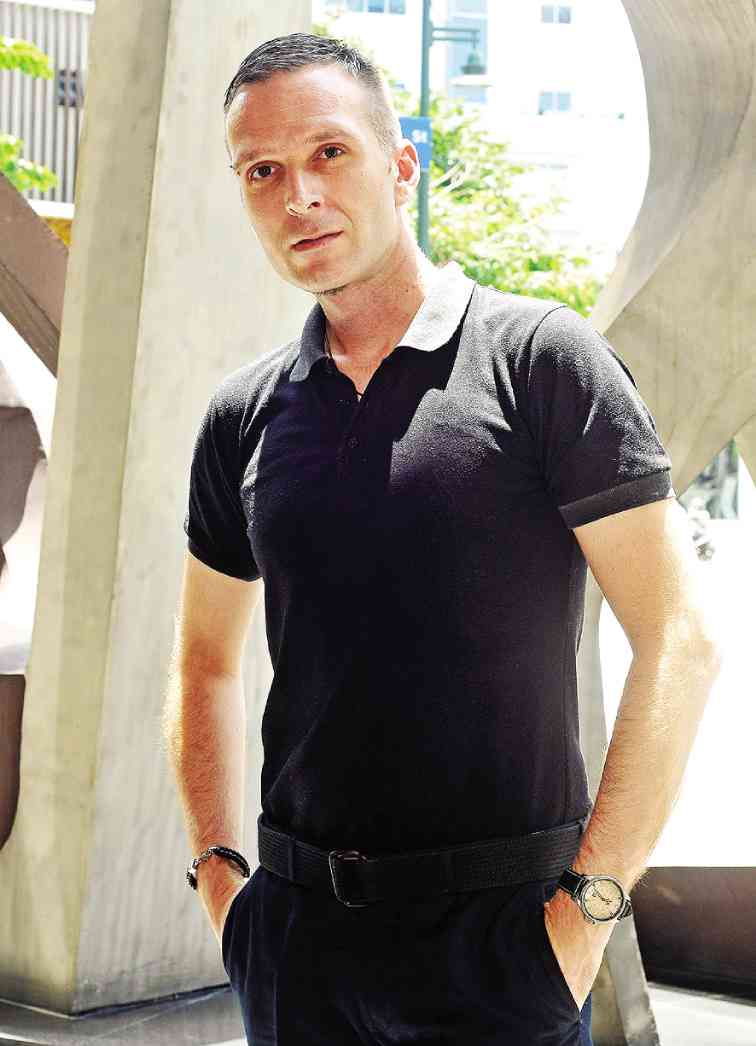 It has been eight years since Laurent Hebert arrived in Manila, and yet first-time clients still get astonished when he asks them to stand as he cuts their hair.

When the French hairstylist introduced his signature cutting technique here in 2005, as he came to join the Franck Provost team in the Manila franchise, making a client stand through the haircutting process was unheard of. It is believed only he does this in this town to this day.

But lest people think his method is all gimmick, Hebert explains how he came to cut hair this way.

“It’s a funny story,” Hebert says in his thickly accented English. “When I arrived in 2005, people were like ‘Whoa!’ They think it’s because I’m tall. No. If you ask me, it’s more comfortable for me to sit down. It’s really about the proper way to cut hair.”

When he entered the Franck Provost Academy in Paris, Hebert recalls how Monsieur Provost himself happened to pass by as the young lad was about to cut a customer’s hair.

“He pushed my stool out of the way and told me and my customer to stand up. Then he showed me. ‘See, it’s easier to move your customer. She’s standing straight. You can move her all around. You can balance the head.’ He showed me how important it is for the external line.’”

Only at the beginning

Hebert proceeds to show how a slouching customer on a chair, or a hairstylist leaning his/her elbow on the customer’s chair, can affect the outcome of a haircut.

“A customer may be sitting straight and relaxed at the beginning,” he says, but she will soon be tilting her head to the side, or sliding half her body off the chair.

Even as he cuts hair this way, Hebert doesn’t impose his method on his styling staff at Franck Provost Studio at The Fort. He allows them to develop their own techniques.

To be clear, Hebert doesn’t make his clients stand throughout the cutting process. A customer only stands at the beginning, as he cuts the hair into the right symmetry. And the standing technique only applies to female clients.

“Men have short hair,” Hebert explains, “there are no lines to worry about.”

Hebert is a 20-year hair veteran with a master’s in the art and science of haircutting. He used to teach in Paris.

Tess Alvaran, the hostess at Franck Provost Studio at The Fort, who models for this shoot, says Hebert’s method is a source of amusement for first-time clients.

“Even customers from a nearby salon who come here to try Laurent are surprised. Laurent’s the only one doing this.”

Alvaran has worked with Hebert for five years, and her admiration for her boss is clear.

“He’s the only senior stylist I know who does everything from start to finish. He might have an assistant next to him but he does the blow-drying himself.”

He’s also strict about time because he wants to concentrate on each client at a time, says Alvaran.

Just like his method, how Hebert came to be in these shores is, in itself, a funny story, as he puts it.

Baby Cruz, the owner of the Franck Provost franchise in the Philippines, was interviewing stylists from Paris to bring to Manila, where it already had an outpost on Jupiter Street in 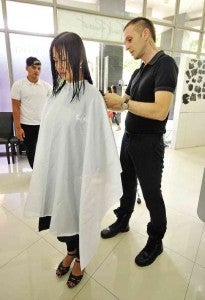 Makati. Hebert had never been to Asia at the time and he had heard many negative stories about the Philippines, most notably the spate of kidnappings by the Abu Sayyaf. He   met with Cruz with the deliberate intent of messing up the interview.

“I vowed to make the interview so bad I wouldn’t have to move here,” Hebert recalls with a chuckle.

Hebert knew the Philippines was a Catholic country, and he was in a longtime relationship with his same-sex partner.

“I told Mrs. Cruz that if I moved here, my boyfriend will have to move with me. She said, ‘Okay, that’s nice.’” The Frenchman was floored.

“Then she started asking me about my plans, about life. It was no longer about work. I felt a connection. I found myself saying yes—but I said only for a year.”

And move he did in 2005, along with the (now ex) boyfriend, who only stayed a year. Hebert stayed on for 3½ years until the itch to up and leave came, and he said his good-byes to Cruz. Franck Provost was expanding globally and the stylist wanted to go to the States.

“Mrs. Cruz talked to me again and said we had a new project. She was opening a new salon at The Fort. I said yes.”

Hebert says Filipinos are largely conservative with their hair. “But I respect that,” he says. “It’s part of the culture. What you can do is suggest, to do things step by step.”

When he sees some men and women on the street, however, he gets the urge to run after them.

“I wish I had my scissors with me!” he says in jest.

In the eight years since he first came here, Hebert finds that many Filipinos are now more willing to experiment with their hair.

Filipino men are surprisingly more willing to try something new with their hair, especially the ages 20 to 30, he says.

When it comes to color, Filipinas stick to “natural shades with some highlights,” he says with an eye-roll. And Hebert isn’t one to dictate or strictly abide by trends. “Ideally it’s supposed to be about trends,” he says. “But no. If the trend is pink, I can’t tell all my customers to have pink hair. I follow what my customer wants. It’s about being yourself. I don’t insist.” 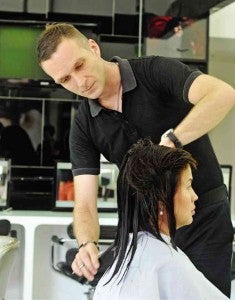 Hebert suggests to get a haircut “once you see your hair is losing its shape,” and that usually starts a month after your last haircut. For men who are starting to lose their hair, get topical treatments or implants. Otherwise, “Shave!” he says.

This stylist doesn’t adhere to the dictum that women of a certain age should start wearing their hair shorter.

“That’s true, but more for practicality. Who has time to spend so much fixing their hair?”

And for a Westerner who has lived in the humidity of the tropics, he doesn’t go by his compatriots’ stance that hair be washed only every three days or so.

“The scalp needs 24 hours to dry,” Hebert says. “Washing too often can dry the scalp and cause hair to fall. Every two days would be better.” Then he concedes that may not be amenable to Filipinos. “Even me, after living here, when I shower without washing my hair, I feel like something’s missing.”

While he says competition is important—“If there’s no competition it’s boring; you have to have an open mind”—Hebert says he has no time to check out what other stylists are doing. He doesn’t go around snooping on what others are up to, even as he knows at least one other popular stylist comes to lurk by his studio to spy on him.

“I go to some events, but I’m very discreet.”

This Frenchman believes hair competitions are very important not only to young stylists but even to longtime professionals like him.

“It helps a lot!” he says. “Even for me, sometimes you see something and you go,  ‘Wow! How did he do that?’ Filipinos are very creative.”

Hebert says he has had an enjoyable life in this country, even as its failings has also taught him patience.

“I can be myself here,” he says. “Unlike in Paris, especially as a homosexual, I don’t have to do a hide and seek. I get to enjoy life.”

But what he loves most about his job are “the people.” “I draw the line between personal and professional. But you become close to people and they become family.”

And yes, even “family” has to stand when he cuts their hair.