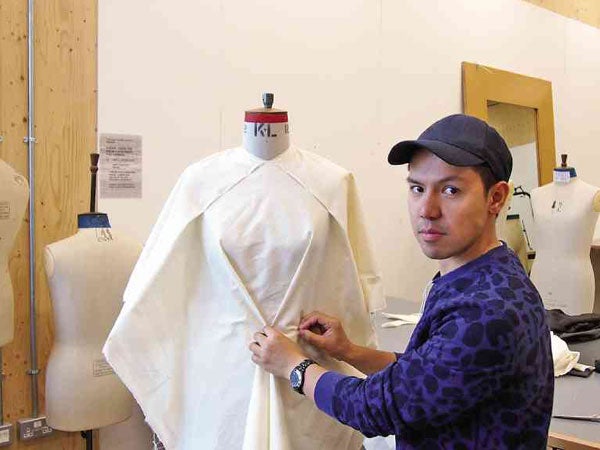 What Look of Style winner learned: Never channel or copy

As one of the most prestigious fashion schools, Central Saint Martins is faced with two of the industry’s most overused buzzwords: peg and fierce.

Filipino designer Roland Alzate, winner of last year’s Look of Style award, discovered this for himself when he spent four weeks at Central Saint Martins (CSM), also known as the University of the Arts London, last April.

The Look of Style award is held every year by the British Council with Inquirer Lifestyle and Look magazine. The nationwide contest looks for a young, enterprising designer to send on a short stint to Central Saint Martins.

“When I was starting to build a collection for one of my classes, for instance, the teacher noticed, through my drawings, that my pieces were ‘so Lanvin,’” said Alzate. “Of course, I wasn’t consciously channeling Lanvin, but when I thought about it later, the teacher was actually right.”

Although his mentors and classmates were impressed with Alzate’s skills and taste, given that he’s a newbie, his teacher wasn’t paying him a compliment with his “Lanvin” comment. And Alzate knew it.

His teachers work in the industry—one for Hussein Chalayan, another for Paul Smith. They also know their fashion history. So, whether you choose to channel existing style or go for seminal looks from the past, you’re bound to be found out.

“I knew what I was getting into the moment we had a briefing in the admin office,” he said. “They impressed upon us that Central Saint Martins is a school for people who have something to say. If you’re just referencing all the time, the school is probably not for you.”

As part of his prize, Alzate received a one-week scholarship, plus hotel accommodations, from the British Council in Manila.

He took up Creating New Concepts in Fashion under Petra Metzger with 14 others from various countries. Then he decided to take up additional courses such as Building Fashion Collection, Exploring Fashion Design and Designing Fashion T-shirt Collection.

“I took the latter course because I saw it as a great help in my job at Bench,” said Alzate.

Back in Manila, designing his newest collection for HerBench, Alzate immediately felt the difference. There’s now a “process” to what he does. Before, he could design a 60-piece collection in an hour or so.

“Now there’s a bit of a struggle, as I’ve had to grapple with an inner voice asking me every time: ‘What are you trying to say,’” he said. “I think the process became harder, but you need to go through such a process if you want to grow as a designer.”

The HerBench line, which has yet to hit the stores, Alzate said, has a more solid “story.”

“Unlike before when I just gathered and improved on images I saw and took a fancy on, a lot of thought really went into my new collection,” he said. “I incorporated in the Spring-Summer collection some of the things I did in school.”

Alzate considers Creating New Concepts as the most intensive and demanding of the four courses he took. Each session lasted eight hours. He got a foretaste of things to come on the first day when they were asked to visit and draw inspirations from several museums.

He also did the Hayward Gallery, a light show and a David Bowie exhibit.

Instead, it allows them to draw ideas from everything, from interesting iron grills found in windows to the seemingly antiseptic steel-and-glass sheets that make up a Eurostar station.

“You can channel inspirations from anything, including a designer bag or sofa, except clothes,” Alzate said. “Although the process itself was quite cerebral, it was also in a way new and liberating for me. Part of the teachers’ job is to put us back into default mode and help us see clearly our respective strengths and visions as designers.”

His love for tailored and streamlined clothes was reinforced, and he was also introduced to new possibilities. Before this, Alzate seldom did draping using chiffon. But one class required draping.

Not only were they given only a minute to drape, they also had to photograph their work before dismantling it. They were then asked to cut the muslin fabric and work on a smaller

material for the next draping exercise.

In contrast, Alzate remembered the “wasted” day he spent with a supposed mentor, a local designer, who did nothing but show them artsy nude photos he took of male models. The veteran designer “chitchatted” and made light of everything except the art of making clothes and running a business.

“That’s one thing that sets teachers of Central Saint Martins apart,” he said. “They’re so generous. They’re not afraid to share their secrets with students.”

At CSM, he and his classmates also had to deal with the paradox every modern-day designer is faced with. While every designer wants to be original, said Mark Hadley, one of Alzate’s teachers, there’s almost nothing left in fashion to “invent.”

“Since everything has been done already, it’s more of making your own story,” said Alzate. “To be more exact, it’s more about finding a way to tell your own version of that story.”