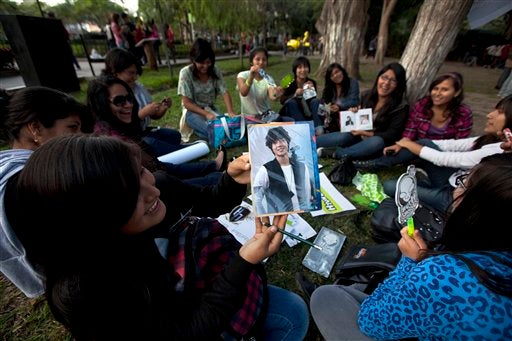 In this May 11, 2013 photo, a fan of South Korean singer Hyun Joong shows her picture of him as she sits with other fans as they celebrate the singer's birthday in Ramon Castilla park in Lima, Peru. Hundreds of fans of K-pop gather each week in the downtown park to dance to the energetic music. Some dress up as Korean comic book characters. (AP Photo/Martin Mejia)

LIMA, Peru — Teenagers throughout Latin America have long looked north for pop music inspiration. Now the East is rising, with a large and enthusiastic cult of fans in some countries following the K-pop music from Korea.

It’s a movement especially strong in Peru and Chile, and it goes far beyond Psy and “Gangnam Style.”

Hundreds of fans such as Araceli Galan gather each week in a downtown park in Lima to dance to the energetic music. Some dress up as Korean comic book characters.

“I’ve liked K-pop since I was 10,” said Galan, now a 16-year-old student at a local university. “I learned everything from the Internet because here in Peru you don’t find much on radio or television.”

She’s amassed a collection of posters, bracelets, T-shirts and records of her favorite, Kim Hyun Joong, who was met by thousands of fans when he arrived at the airport in Peru’s capital in February.

“Although you won’t believe it, in Peru the K-pop groups are starting to be more popular than Justin Bieber, Lady Gaga or Demi Lovato,” said Diana Rodriguez, who is capitalizing on the trend by organizing Korean dance contests throughout Peru.

While there’s little hard data on that, there’s no questioning the fervor of the fans who turn up at Ramon Castilla Park each Saturday and emulate the dances of K-pop bands.

“We start at 10 in the morning and we stay until 6 in the afternoon,” Galan said.

A bus trip away is the small Arenales shopping center where entire floors are dedicated to South Korean music, clothes and food.

“I like the ‘sujebi’ soup and another dish that combines a sweet and salty flavor that I can’t remember the name of,” Galan said.

Some try to solve the language problem by having the songs translated into Spanish and posting them on the Internet. “The lyrics are pretty. It’s not as eroticized as reggaeton. It’s more romantic,” said Pamela Diaz, a 26-year-old fan.

“It’s made me want to learn Korean,” said her 14-year-old sister, Sabrina.

The trend has surprised Peruvian parents, just as the onslaught of rock-and-roll once alarmed an earlier generation.

“My father listens to rock in English; he doesn’t like K-pop at all,” Galan said. “He tells me, ‘Why do you listen to that music if you don’t know Korean?’ And I tell him that he doesn’t know how to speak English either. Music you only need to feel.”