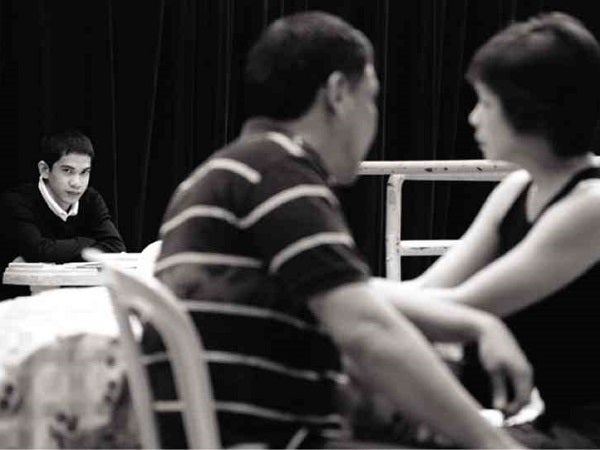 What it takes to be ‘SM’ at the Virgin Labfest

Stage managers are the individuals who “run” a play or musical, almost never seen by audiences (unless you catch one pushing out a set piece on to the stage at some point during a show), one hand holding a timer and the other holding a copy of the prompt book, a copy of the script that contains all the stage directions: actors’ and set pieces’ blocking, their entrances and exits, all lighting and sound cues, etc.

Backstage, with only a dim blue light for illumination, they call out or signal with their hands to the actors when to enter and exit the stage and to the crew when to execute cues.

Their involvement begins even before actors are cast for a production. Prior to a show’s run, stage managers work with production managers and directors to organize auditions and rehearsals.

“Our work ranges from scheduling rehearsals based on actors’ availability to making sure nobody shows up for a canceled rehearsal, from providing copies of the script for actors and designers, to ensuring there is drinking water for all,” says Ed Lacson.

During rehearsals, SMs, as they are nicknamed in the local theater industry, take note of directors’ instructions and revisions in order to maintain continuity in succeeding sessions. All their notes become part of what eventually results in the prompt book.

“We work with the costume department, telling them of sequence changes; with the props guy, telling him that an antique phonograph will be broken by an actor into pieces in every show. We’re the ones who put glow-in-the-dark tape on the stage so actors won’t fall off during scene blackouts. We have to keep the director happy while staying within budget. We make sure everything is finished on time,” Lacson explains.

That’s just for one production. Now, imagine having to do all that for 10 plays. All at the same time.

The Virgin Labfest, “a venue for playwrights, directors and actors to bring to life untried, untested, unpublished and unstaged plays,” is organized by Writer’s Bloc, a playwright’s group, and Tanghalang Pilipino, the Cultural Center of the Philippines’ resident theater company.

Now on its ninth year, VL will present 10 new works: three sets of one-act trilogies and one full-length (two-act) play with Tuxqs Rutaquio as artistic director.

Roxas was the pioneering head SM for VL in 2005. Lacson, meanwhile, has the distinction of being head SM for the most number of fests (four). “What started out as a platform for writers to showcase their work has become a venue for stage managers as well,” he says.

“Scheduling is the major challenge. You have a finite number of venues and hours, and you have to find a way to accommodate everyone,” he adds.

“You have to find locations for 10 productions rehearsing in a day. We use hallways, stair landings, etc. It’s already difficult scheduling just one production, what more an entire festival,” says Roxas, laughing.

“Ten plays means you deal with 10 directors. Some plays have only two actors, some have 10. Aside from rehearsal needs like substitute props (while the actual props are still being fabricated), tables, chairs, refreshments, etc., each also has its own set of production requirements: sets, tech, props, costumes, etc.,” says Roxas.

There are problems to solve with set changes between three one-acts in one show, and between two shows in a day.

Roxas notes the importance of coordinating with all the SMs of each play. “We sometimes get students, so we also have to teach, guide, brief, assist, remind them.”

She once had to cue a show on short notice because one of her SMs fell ill and couldn’t make it to the theater. “Even if I was not assigned to that play, I had to know what was going on. When you’re head SM, you have to keep an eye on everything.”

When Lacson first handled the fest, it introduced related events such as staged readings and site-specific works.

“It was around 26 plays across seven separate venues within the CCP. We were understaffed since we hadn’t come up with deputy SM positions yet … It was crazy. I didn’t go home any more, I slept in the storage rooms at CCP. It was the most traumatic two months of my life. So I did it again the year after. And the year after that,” he laughs.

“VL is a celebration,” says Roxas. “It’s an opportunity for all artists to come, unite, and create art. Everyone is welcome and given a chance. Even with stage management, students are given opportunities. Seeing and working with new people and veteran actors and actresses, collaborating with different designers and artists, it’s a great feeling.”

“We all do it because we just want to create something that we love: theater,” says Lacson. “New stage managers can experience working in a professional setting. I used to assign newbies to established directors so they would learn. Some met expectations, some did not, but the experience will always prepare them for the real world of theater production.”

Lacson loves it so much, he even organizes the cast party.

“I’ve been to a lot of cast parties, but VL is always the most fun because the scale is also like a festival. It’s not really part of my job, but I do it because I know putting all those people in one room will make for a great party.”

“Of course, the stage management team always arrives late because we still have to clean up the venues after the last performances,” he says, laughing.