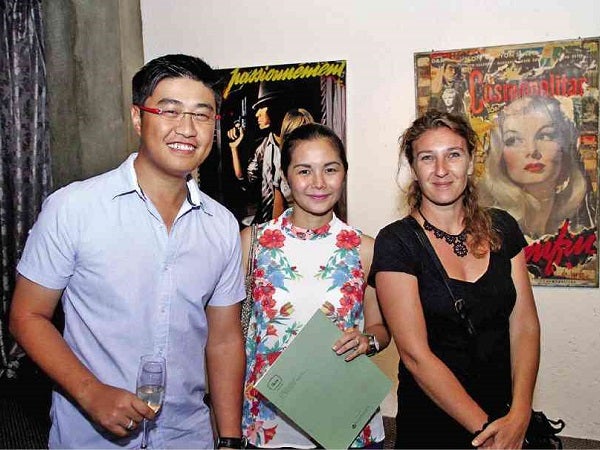 The De Lormes are no ordinary French couple, and neither is their life story, always choosing adventure over comfort and success.

Parisian pop artist and interior decorator Delphine Groult-de Lorme and her husband TV producer Henri de Lorme first visited the Philippines in 2006, determined to find a new home on one of the islands. Their aim: to get away from their very comfortable comfort zone in the French capital.

Iloilo was on top of the list simply because “the name was very attractive to us,” Delphine explained, “Almost like Bora Bora. It sounded very exotic.”

For one month, they moved from island to island—Guimaras, Bohol, Siargao and Palawan, among others—and found Cebu to be the most livable after they discovered the international school for their two daughters and son, so they flew back to Paris to convince their three kids to move to a country where they had absolutely no roots.

Five months later, after selling everything in Paris and having a week’s worth of going-away parties, they settled in Cebu. “It’s definitely the craziest thing I’ve done, moving here. It’s crazier than dancing on the table—even if I like to dance on the table,” Delphine grins.

After seven full years in Cebu filled with success, love, friendship, crazy parties and the ties that bind, the De Lormes decided to pick up and move again, this time to Myanmar.

So it was a sentimental final exhibit of Delphine’s works of art last May 2 at the new boutique hotel, The Henry, which served as her farewell party also. Writers and photographers from the media, pop art enthusiasts, feminists, her wide circle of friends, and her adoring legion of fans all came to bid the woman who has left her mark in their hearts and in the interiors of Cebu’s La Maison Rose and Gilt artisan lounge as well as Herve and Tess Lampert’s beautiful rental house in Maria Luisa where she had one more final farewell party.

Exhibit at The Henry

Her paintings are exhibited (and are for sale to art collectors with deep pockets) at The Henry, which is the perfect temporary home for her bold and bright mixed media pieces because of its eclectic, industrial-chic vibe. Owned by the lovely couple Detlef and May Ernst, and managed by Manila-based Hospitality International Inc., which also manages Joya Lofts and Towers in Rockwell, The Picasso Boutique Serviced Residences in Salcedo Village, Parque España Residence Hotel and The Mondrian Residences in Alabang, The Henry describes itself as “a little left-of-center, big on personality and obsessed with the details.

Inspired by popular art and culture, De Lorme’s paintings are a blend of old prints and paint, fused together to create an indistinguishable collage of pop art. “I usually tear up an old movie poster which I buy from the flea markets in Paris then paint over it. Some of my works are pure paint, some are pure collage, you don’t know if it’s one or the other. I like it when people can’t tell anymore.”

Her only disappointment about Cebu? The lack of commercial posters she can tear—there’s nothing except for Tanduay posters and the faces of government officials running for election.

The artist is deeply inspired by the works of Italian artist Mimmo Rotella who is best known for his collage made from torn advertising posters, as well as pop artists Andy Warhol, Roy Lichtenstein and Peter Blake, abstract expressionist painter Jasper Johns, and neo-expressionist Jean-Michel Basquiat.

Aside from her paintings, her collection of furniture is pure pop-art glamour. Her dressers are either ultra feminine and Parisian or with statements of political undertones, like a dresser with the face of Mao Zedong with soldiers and the words “Not Made in China” scrolled on it.

In Myanmar, she knows she will continue doing what she loves: painting barefoot. “I choose to live the way I live, to always follow my desires and to do everything so I can do what I want to do,” she says with a bittersweet tone.

Cebu is sad that this vibrant woman of independence, conviction and unguarded charm who has left her indelible mark in the city is gone but we think it’s just an excuse to plan our next trip. Destination: Yangon.