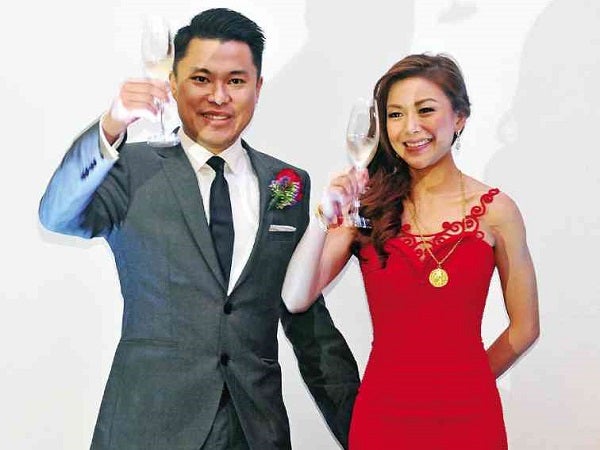 KEVIN and Michelle Tan give their first toast as a couple. ANDREW TADALAN

It was a cheery—and romantic—Saturday noon last week when Megaworld scion Kevin Tan and Michelle See had their engagement reception at Passion Restaurant at Maxims, Resorts World.

In fact, it wasn’t only an engagement. The young couple was married in civil rites right before the reception—a ceremony witnessed only by their families and principal sponsors.

As early as 11 in the morning, guests started arriving at the restaurant. Shortly before noon, President Aquino came, with sisters Ballsy Cruz and Kris Aquino.

As the guests took their seats, the newlyweds walked in and the screens around the restaurant started playing their prenuptial video—a lush and sweet one—shot in Boracay. They make a handsome couple indeed.

They first met at Opus almost two years ago—an accidental late-night meeting. Kevin was hanging out with friends, while Michelle was waiting for friends who were rather late.

Their initial conversation was a bit interesting, and guys wanting to make a first good impression on girls could take a cue. Talk between the new acquaintances veered toward drinking, and Kevin, 33, courteously advised Michelle, who’s three years younger than he, what to guard against when drinking. He gave her tips on how a young woman could hold her alcohol. Not only was she impressed, he also won her initial trust.

The two became a constant twosome since then.

Kevin is really a sociable guy. He has what the corporate world loves to call “people skills.”

His father Andrew was chuckling when he said that many, if not majority, of the guests that lunch were Kevin’s friends and Michelle’s, not his. That was how wide Kevin’s social network has become as first vice president and division head of Megaworld, in charge of the conglomerate’s Lifestyle Malls.

Kevin and Michelle will have their church wedding in July in Singapore.