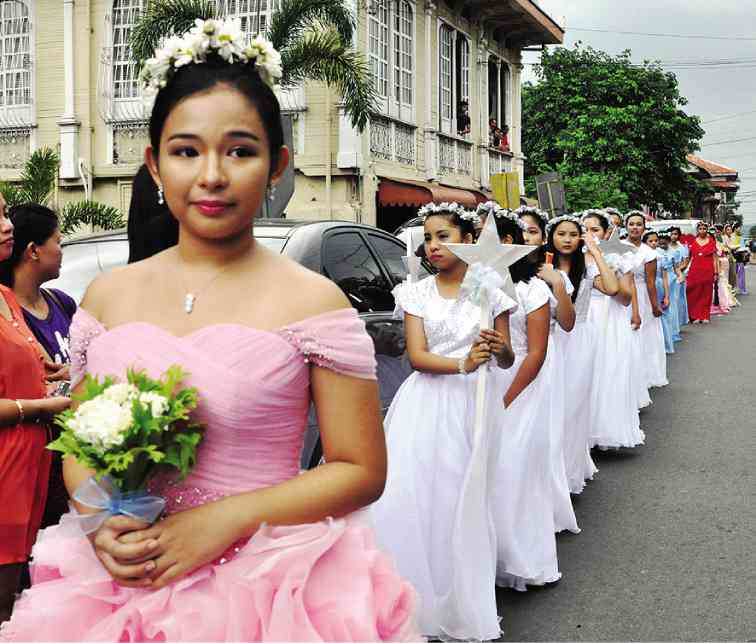 PRETTY maids all in a row

Pila celebrates its Flores de Mayo–now on its 125th year

The heritage town of Pila, Laguna, is rich in history, having survived wars, revolutions and catastrophic floods which forced the residents to transfer to its present location near the capital town of Santa Cruz.

In 1762, Britain, at war with France and Spain, invaded the Philippines and conquered Manila. Then the British (and Indian) soldiers swept southwards to Laguna, burned the capital and ran wild in Pila. In the historic San Antonio de Padua Church, they seized one bell and sacred ornaments as “spoils of war.” (More than a century later, the Americans would do the same to the church in Balangiga, Samar.)

That century—the 18th—was disastrous for Pila. There was a strong typhoon, a cholera epidemic and finally the town was inundated. And that was when, during the latter part of the century, the town transferred to its present location. 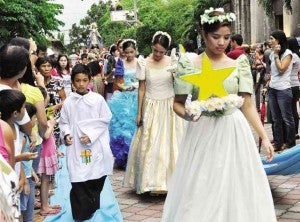 With the residents came the church, torn down and transplanted “almost stone by stone,” in the words of historian Luciano P.R. Santiago, to where it now stands in the town plaza.

Many Pileños took part in the Revolution against Spain, participating in the Battle of Santa Cruz in 1896 and later (in 1898) rallying around General Paciano Rizal. In 1899, the town was again assaulted by foreign invaders, this time the Americans.

The Philippine-American War rudely interrupted the Flores de Mayo—that beautiful Catholic tradition of offering flowers to the Blessed Mother during May, the month dedicated to her—in Pila, where it had been introduced in 1888. And the festivities stopped, although the daily floral offerings to the Virgin Mary continued.

Finally, in 1912, the Flores de Mayo (known then as Flores de Maria) which has always been a big event in Pila, resumed.

Our Lady of the Flowers

Honoring Mother Mary with flowers during May may be said to be a byproduct of the proclamation of the dogma of the Immaculate Conception in 1854. And since the tradition is now on its 125th year in Pila, the Pileños celebrated Flores de Mayo in a big way during the last Sunday of May.

Leading the celebration were the descendants of the founding families of Pila (Rivera, Agra, Alava, Relova).

The celebration started with a drum-and-bugle band from Pakil, Laguna, led by majorettes. The Twelve Estrellas, girls in white carrying stars, posed on the stairs of the stately residence of Corazon Rivera-Relova, vice president of the Pila Historical Society, for a photo-op. Around them were the girls in blue carrying the sign Ave Maria (Hail Mary).

There were symbolic offerings in wood of fruits, a quarter moon and an anchor. There was an hermano and an hermana, a kind of big brother and big sister to make sure proceedings went smoothly, and a Rose Mystica representing the Virgin Mary (sometimes referred to by the Church as the Mystical Rose).

The procession made its way around the plaza, with its early 20th century Municipal Hall and well-preserved ancestral homes, reached the church, was joined by the image of the resplendent Virgin, garlanded by flowers at her feet, and then proceeded to another route around the town.

A long, Marian-blue carpet was spread out in front of the church.

The Blessed Virgin was borne triumphantly back to the church for concluding, festive ceremonies marking her Ascension, symbolized by a stairway leading to heaven.

The church decor and the ‘caro’ bearing the Virgin were done by Vic del Mundo.

The afternoon was hot and humid, threatening to rain. It did shower in the early evening but not enough to spoil the event. Perhaps the organizers offered eggs to Santa Clara, or maybe Mother Mary did not want rain on Her parade.