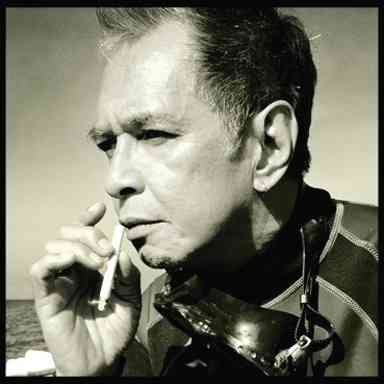 The boy’s appeal for his dad to quit smoking proved so compelling that the chain-smoking De Leon chose to kick his decades-old habit cold turkey before 2013 could roll in.

“If your son would tell you, ‘I’m too young for you to die on me, please quit smoking,’ I’m sure you would be bothered, too,” De Leon told us over lunch. He used to smoke at least two packs of cigarettes a day.

Although working out regularly had already become a habit, smoking was one vice De Leon couldn’t seem to do without. Or so he thought. On the last day of 2012, De Leon tried to satiate himself by smoking one too many cigarettes. He had no idea if it would work.

“I wanted myself to reach a point where I’d hate smoking,” he said. “And I did. The taste became so awful that I couldn’t take it anymore. When I came to my last stick, instead of lighting up, I broke it into two, shot it and uploaded it on Instagram. I then showed it to my son, who was then having breakfast, before greeting him ‘Happy New Year.’ He broke down and simply said, ‘Dad, I’ve been counting the days. I’ve been counting the days.’”

These days, De Leon is content to occasionally light up a so-called electronic cigarette with several supposedly safe candy-flavored options. He has also found a way to combine his passion for photography with fitness in his latest coffee table book, his 14th work, titled “No Body is Perfect.” And thanks to the so-called Tanita body composition machine, De Leon is able to reveal his subjects’ supposed metabolic ages alongside their actual biological ages.

“I was lucky because all my subjects have metabolic ages that are younger than their real ages,” he said. “Otherwise, I really wouldn’t know what to do. Putting them on the spot was farthest from my mind. I just want this book to be a celebration of healthy living.”

“Nobody is Perfect,” a 120-page hardbound coffee table book measuring 16.5 x 7.25 inches (almost as narrow as a regular handbook), is the maiden venture of Kape Teybol Book Publishing House, a company De Leon formed with a group of friends, including lawyer and former justice undersecretary Al Agra, the book’s publisher, and Jocelyn Alberto.

“I told my subjects that they would have to fit in the book, and they seemed to have taken me seriously,” De Leon said with a laugh, referring to the book’s unusual and slim measurement.

The book’s launch on June 27 will coincide with the opening of De Leon’s exhibit of more than 50 life-size photos of his subjects at Bonifacio High Street’s water park amphitheater.

He tapped stylist Millet Arzaga Gonzales to do the styling, and Jing Monis and his team to do the  hair and makeup. De Leon needed just 21 working days to shoot 52 personalities in his Taguig studio.

Through moderate exercise and by sticking to the Integrative Health Program, Agra was able to gradually shed off as much as 60 pounds before his 50th birthday in April. From 235 pounds, his weight now fluctuates between 175 to 180. His shirt size is also down from XXXL to L.

“This was him before,” said De Leon in mock disgust while showing us a “before” photo of Agra on his iPad. “Look at his exposed stomach. Nakakahiya, di ba?”

But the best part is the slimmer Agra now has a metabolic rate of a 36-year-old man based on the Tanita body composition machine’s reading. Costing around P1.4 million, the machine looks like a weighing scale but with a totally different function. The subject stands on the machine for less than a minute while a slight amount of heat passes through his body. It then coughs out a printout, which reveals, among other stats, the subject’s metabolic age.

De Leon, who wakeboards with Irijah and frequents the gym at least three times a week to do cardio and weight-training exercises under personal trainer Roland Andaya, isn’t doing badly either. At 58, the metabolic rate of the former bad boy of Philippine celebrity photography is that of a 42-year-old man.

But none of these famous people could match the granddaddy of them all: Webb. At the ripe old age of 70, the former basketball player is as hale and hearty as a 55-year-old man!

When people behind the company distributing Tanita machines found out about the project, they were more than willing to lend one to De Leon. And, in the photographer’s words, it gave a “whole new angle” to what would have been just another coffee table book featuring beautiful, famous and accomplished people.

“My subjects had a vague idea of what the concept was all about,” he said. “So, most of them, who are already into fitness, to begin with, felt the need to beef up their respective workouts. Still, not a few of them nearly chickened out during the shoot when they saw the actual machine.”

Gan, for instance, wanted to back out until De Leon reminded her that, as a long-distance runner and weightlifter, she was no slouch. And, true enough, before the fully made up Gan, 52, faced De Leon’s Canon 5D Mark III (with an 85 mm L lens) camera, she stepped on the Tanita machine and, soon after reading the printout, got the surprise of her life. Her body is as young and probably as hot as a 37-year-old woman.

“In effect, the machine even became an incentive for them to give the shoot their best,” said De Leon. “The happy relationship between me and the subject was quite palpable. All of them were feeling good and willing to do anything because they just learned that they’re metabolically younger.”

The experience also affirmed what De Leon rather belatedly experienced in life. Before he turned 50, he was resigned to the fact that his “rock star” days were over. In fact, he was already contemplating how to while the days away living a very sedentary life. He thought everything would begin to slow down to a crawl once you’ve reached that number, but he now knows that he was wrong. Terribly wrong.

“When I hit 50, I discovered all at once that I had become even more passionate about life,” he said, while showing us his wedding ring. “The years I’ve spent with my wife Abby (Arenas) and our son Irijah have been the best 17 years of my life. I’ve also proven for myself that you can still do so much more when you’re healthy.”