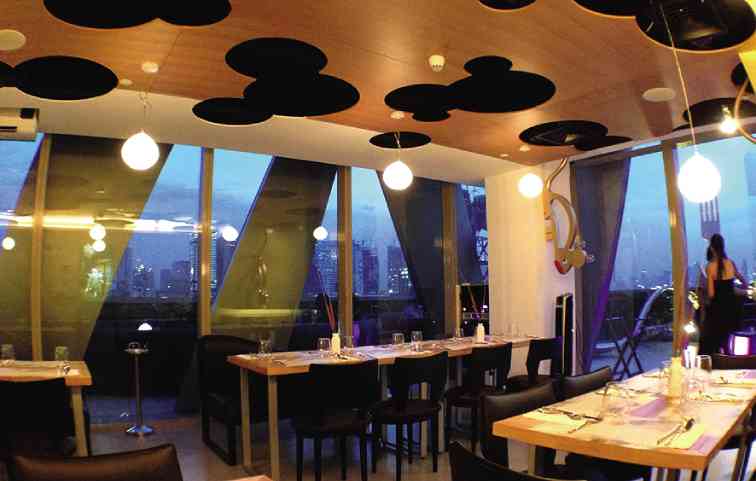 VASK interiors are a design statement

It seems that this week, at least, I can go out without wearing my flame-retardant suit. The initial reluctance I felt about taking a peek at the hip new restaurant Vask was outweighed by curiosity, as well as the importance of this opening on the local dining scene.

Both chefs and their backers seem inclined to hedging their bets these days, putting up imported franchises, “sister” establishments to a well-known name, or quiet corner restaurants; so to come out with a new and original restaurant right smack in the arena of competition is a bold move.

All credit to the chef, J. Luis Gonzalez, and his backers, for originality and choosing to play at this level. I believe that a restaurant’s pretentiousness is directly proportional to how weird the sink in the bathroom is, and the angular slab that I found was in keeping with the funky chairs, stylized lamps, and ziggurat seats on the open-air, astroturf balcony lounge.

But the blond wood, paper placemats, and chatty waiters keep at bay the horror of having walked into an interior decorator’s showroom.

Truth be told, all the pretentiousness in the world can be forgiven if the food supports it, which in this case it does. 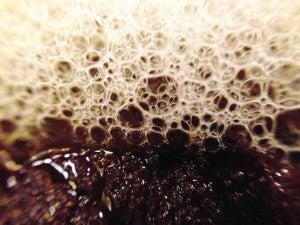 The flavors are exuberant, passionate and bold.

There was no degustation menu offered to us, which was probably to increase turnover, since the 6:30 p.m. crowd had to clear out by 8:30 (and the service was a little too brisk at times, our starters whisked to one side to give way to the mains, and the dessert menu presented to me while my wife was still eating).

There was a page of “traditional” entrées, mains and desserts, and “modern” ones on the obverse.

A selection of tapas was presented on a small card and arrayed on the counter. It was brief, to the point, and everything we had off it was very, very good.

The traditional Basque menu was enticing, but it was the innovation on the other side of the page that truly beckoned.

Many of the experiences I’ve had with modernist cooking have been in solemn temples to the art (and to the chef) with the food emerging in hushed reverence, rather than dished out with the speed of a Chinese short-order chef. And this is a good thing.

I’ve already aired my piece about the hand-wringing urgency with which we had to eat our meal, but I have no complaints about not having to wait ages between courses, or the fact that the food does not have to arrive with a fanfare of trumpets and a gong. It means that Mr. Gonzalez wears his “molecular” credentials lightly and is more interested in feeding his customers, substantially, rather than showing off.

The abstractions of the techniques used in the new modernist culinary tradition are about making a point, but ultimately, one hopes, the goal is to put these to good use to cook better and make good and interesting new food and flavors.

I was very happy with my mussels, which were actually mussel meat put back in the shells with a cream sauce and gratinéed. But the standout among the starters was the octopus, served up in a cloche jar which was whisked away to reveal a puff of spicy smoke and tender bits of octopus, also in a creamy sauce.

When they cleared the starters away, they carefully lifted the soiled utensils off the plate and put them back on the table with great flourish.

Mains were a blood-red tenderloin “with mushroom textures,” one of which was presumably the bed of foam under which it arrived. O foam, my old enemy, we meet again.

But it was not too distracting, and the steak was perfectly cooked; in fact I have not had one as precisely and correctly done in a long time.

For dessert we had the torrija and the leche frita, which tasted suspiciously similar. Between the two I would recommend the torrija, a brioche steeped in aniseed and fried up like French toast.

By the time dessert rolled around, the 8:30 crowd of polished and manicured people was drifting in and being served drinks on the balcony lounge, while the tables beside us were being

In the absence of parental responsibilities, early somnolence, or wanting to eat a second dinner somewhere else, I would highly suggest the second seating rather than the ¡Andele! ¡Andele! pace of the first. I certainly will opt for the former the next time I go.

Vask has accomplished the extremely difficult first step, especially in this town, of making an excellent first impression. What it does with this hard-earned capital, whether it can continue pushing boundaries and making us want to return again and again, is what will determine its potential to become a great restaurant.