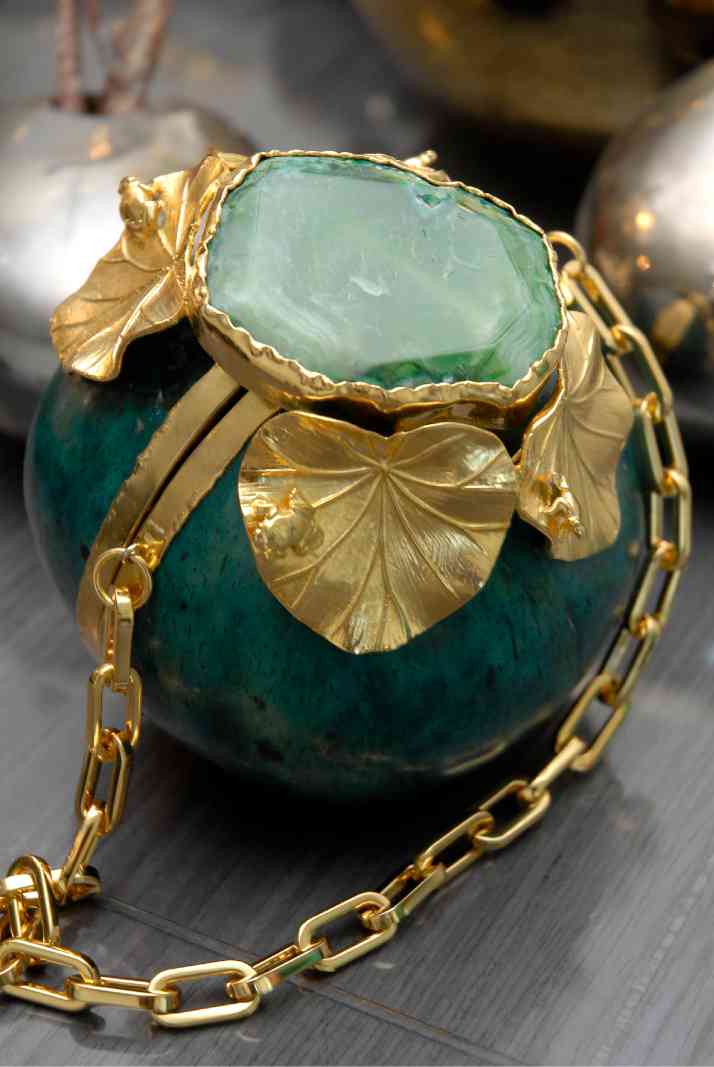 SARAH Jessica Parker was given a black version of this, the “Lily,” coconut shell minaudière with gilded lily pods and emerald-green stone. JOSEPH AGCAOILI

It took Amina Aranaz-Alunan two years to put together a follow-up to her first luxury collection, but her hard work had started to pay off even before it launched.

Part of her 2013 Aranaz Delujo collection won her the Best in Fashion Accessories award in a Hong Kong trade show in March. And if her good luck continues, she just might see fashion icon Sarah Jessica Parker toting one of her designs on the red carpet these days.

Aranaz-Alunan, the designer and creative director of Aranaz, debuted the second Aranaz Delujo collection this week in a private viewing and pre-selling event at the new tapas bar and restaurant Vask at Bonifacio Global City.

The 12-piece collection of minaudières and cuffs comes under the brand’s higher-end deluxe range—delujo means deluxe in Spanish—and will be in Aranaz boutiques in early July.

“My vision is to do this once a year,” the designer and Inquirer Lifestyle columnist says. “I couldn’t do it before because the materials are expensive, and the techniques are more artisan. But this has been an exciting collection because it was a chance for me to explore new materials. For example, this is my first time to work with resin… The beadworks are usually the hardest to make, and I’ve kind of gotten oversaturated with them in the past so I’m giving them a rest.”

The coconut shell minaudières, which was part of the 2011 Delujo collection, makes a reappearance, but with varied motifs. The coconut shells are dyed in different colors and have

Aranaz-Alunan gifted Parker with a black version of the Lily, with an emerald-green stone, when the actress came to Manila last month.

“I have only one of it [black Lily] and it went to her,” says the designer. Aranaz-Alunan only intended to give her gift to the actress through her friend, Pam Quiñones, the stylist for Parker’s photo shoot in Manila. But while the designer waited in the lobby of the hotel, the actress suddenly appeared and Quiñones was not yet in sight.

“We approached her and she was so nice,” recalls the designer. The “Sex and the City” star graciously accepted the present, and seemed to even want to open the gift bag, but she was stopped by her handlers.

“I understand that she might not have been allowed to be photographed [with the bag bearing the Aranaz logo],” says Aranaz, beaming at the prospect of Parker carrying her design.

The collection also includes some Gatsby-esque, Art Deco-inspired minaudières  using mother-of-pearl, tortoise shell, chambered nautilus, and other natural materials. Some of the pieces have matching cuffs with brass studs.

“For evening bags, it’s still big on minaudières. It has been going on for so long, maybe three years,” Aranaz-Alunan says of the trend. “Locally, many are still going gilded, very ornate, sculptural. A lot are into exotic skins.”

Her answers to these are some solid gold-plated pieces. There’s one called “Raya,” with a pebbled texture that’s meant to mimic shagreen. Another mini gold purse has a nameplate for

engraving; some of the pieces are made to order.

She also uses snakeskin in a couple of styles. At least two designs are made of un-shellacked hand-carved wood mixed with other natural materials.

Because 2013 Delujo was created alongside Aranaz’s summer collection, the marine motif spills over into the deluxe pieces. The priciest is about P22,000.

Aranaz opened its first boutique in Pasig in 2004, shortly after Aranaz-Alunan graduated from her studies at Istituto Marangoni in Italy. Her mother, Becky Aranaz, was a longtime bag manufacturer and exporter. Aranaz today has boutiques in Greenbelt 5 and Power Plant Mall in Makati.

“I had so focused on the local market that I’ve only started joining trade shows this year,” says Aranaz-Alunan, to explain why she has yet to have stockists overseas. Aranaz doesn’t yet sell from its website, though it has a few pieces available via the online fashion retailer Vito Studio.

In February, she presented her designs in London, and a month later, in Hong Kong, where she bagged the Best in Fashion Accessories award at the “Fashion Access” trade show.

Out of 500 or so exhibitors, only nine awards were given, and two went to Filipinos, including Aranaz; several pieces from 2013 Aranaz Delujo were shown in that Hong Kong event.

The designer leaves this week to show her pieces at the Canada Philippine Fashion Week in Toronto.

“I believe there’s more room for accessories designers,” says Aranaz-Alunan, who is also academic chair for fashion of SoFA Design Institute, the design school she co-founded.

“It’s inspiring that there are so many local designers. But there are a lot of clothing designers and very few accessories designers.”