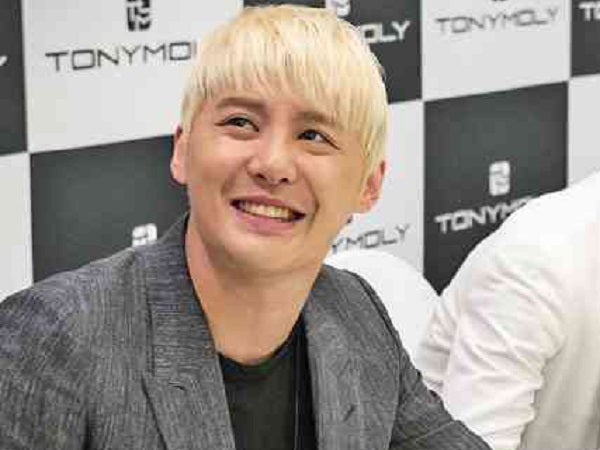 It was a scene straight out of a movie. In a conference room at the Seoul Royal Hotel, burly bodyguards clad in black suits with earpieces made sweeps of the room and we wondered briefly if these guys were packing heat.

Meanwhile, the female host outlined several ground rules for the audience: No cameras, smartphones or recording devices may be brought into the room; no physical contact of any kind with the guests of honor. When you go up to get their autographs, you have to make sure that you don’t block them with your body. If you have a gift prepared, you are not allowed to present it directly to them—boxes labeled with their names were positioned in one corner, where gifts were to be dropped in the box, to be collected and given in private to them after the event. As this last rule was explained, a group of aunties from Hong Kong stood up in dismay. “But could we at least show it to them?” they pleaded.

These strict rules were par for the course for K-pop sensation JYJ, or any K-pop group for that matter.

JYJ is the latest endorser of Korean beauty brand Tony Moly, which initiated the event to feature its latest beauty and skin care products as well as introduce JYJ to the group’s adoring fans.

As the trio composed of Kim Jaejoong, Park Yoochun and Kim Junsu entered the room, a crescendo of girlish screams punctuated the air.

One of the aunties dressed in a hoodie with bear ears and “Yuchun” emblazoned across the hood started jumping up and down; next to her, three women screamed “Junsu!”—willing Junsu to look at them and when he finally did, the three gave each other congratulatory pats.

At first glance, it was easy to see why JYJ elicited such response from its crazed fans. Dressed simply in blazers, T-shirts and jeans, they exuded boy-next-door appeal—that is, if boys-next-door had perfect noses, sculpted cheekbones and pouty lips. Jaejoong was sporting fire engine-red hair, Junsu’s was fashionable blond, while Yoochun’s close-cropped hair was a glossy black.

Their faces were smooth and unblemished. They attributed their great skin to an exclusively Tony Moly skin care regimen. Even before they were signed by the brand, the boys said that they were already Tony Moly users. When they were asked which member was most conscious about skin care, they laughed and said that, as men, they’re still pretty low-maintenance when it comes to skin care.

Despite a lawsuit from its previous management, breaking away from its old group TVXQ and other setbacks, JYJ is doing very well, both onstage and off. The group just finished a concert in Japan and is working on its second album set to be released this year.

JYJ is also active with various philanthropic activities with UNAIDS and World Vision. The boys have also joined Korea’s campaign to end bullying and exclusion in school. With this mix of glitz, catchy beats and heart, how can you not love JYJ?

WIN JYJ goodies from Super and Tony Moly. Two lucky winners will get assorted JYJ/Tony Moly merchandise. One winner will get photos personally autographed by JYJ. Get creative and show us how much you love JYJ; e-mail your entries to [email protected] (subject: JYJ love).