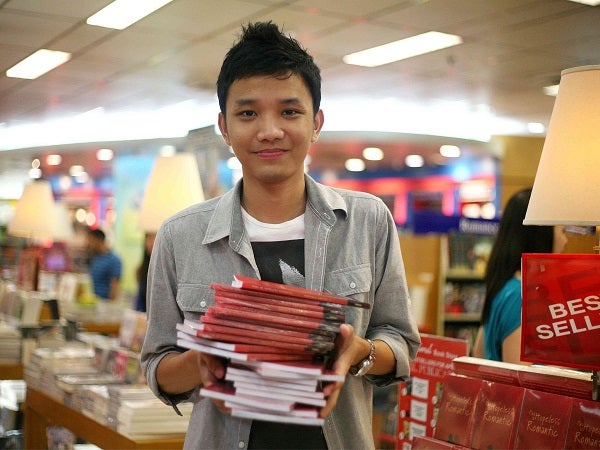 Hope for the hopeless romantics

For someone who traffics heavily in the realm of love lives, Marcelo Santos III rues the fact that he doesn’t have much of one. The 22-year-old first-time novelist and online video sensation says he doesn’t have time for romance, no matter that his surprise best-seller is titled “Para sa Hopeless Romantic.”

“Gusto kong magka-love life. Eh, wala, so sa libro ko lahat binubuhos (I want to have a love life. But there’s nothing. So I pour it all into my book),” he says of the irony.

The result of this unlikely success story is a tale only possible at this time when words are served on multiple platforms.  In the process of writing, Santos has travelled from one form of media to another, exploring how his generation approaches romance, and becoming a symbol of what might be possible given all the options in a multi-media world.

It was in high school at the Capitol Institute in Quezon City that this young novelist’s dreams got their start. He started writing poems in Tagalog in high school on a lark, but got serious about writing in his third year.

“Random lang, whatever poems I could write,” he says, of one of his many pursuits in school.

“I joined all the organizations in high school,” says this former editor of the school paper. “Even the choir,” he adds. But the honor student pretty much stopped writing after graduation. “I enjoyed school so much, I just wanted to stay in school.”

At the Polytechnic University of the Philippines, the advertising and public relations major started cranking out his installments of Love Story on Video, the first one called “Bag at Folder.” These were short videos with background music that, instead of actors or scenes, featured lovestruck lines that he wrote. The video’s Facebook page (https://www.facebook.com/lovestoryonvideo) gained over 500,000 likes.  The YouTube uploads became as popular.

The immense audience that Santos’ videos found online led him to make short films with a cast and a real script. By now, he says he has crafted 210 offerings of Love Story on Video, including last year’s 43-minute-long “My Super Fan Girl,” which featured TV talent Jewel Greenland in the lead role.  The video was produced by Otso Productions.

Santos says he likes using real-life couples for the romantic leads because “it (looks so) natural when they are being sweet.” But, he adds, “I don’t know but this idea (seems to be jinxed) because all the real-life couples in my videos break up. So I was told to stop doing short films with (real-life couples).”

Pirated copies of “My Super Fan Girl” soon appeared in Quiapo, a strange development that doesn’t bother him since the video is available and free online anyway.

Santos says his videos were inspired by his affinity for love songs, a crucial element for someone who admits to not really watching a lot of movies or even reading a lot of books.  In February 2012, however, he stopped making the videos because he wanted to try something else.

This time around, the graphic artist at the Department of Education left his job to work on a manuscript he had started in college.  From Love Story on Video, “Bag at Folder” became “Ryan,” the first story in “Para sa Hopeless Romantic.” Another video, “Upuan,” made the transition into “Rebecca.” The characters in both stories are like him; they’re from PUP, talk the way he does and live out both his experience and those of others he’s heard about.

Three more stories rounded up the story arcs and several comic stories to become “Para sa Hopeless Romantic: The Full Edition.”  Jackie’s story, about Rebecca’s kooky but loyal best friend was eventually added to make up five stories in all.

“I wanted to add Jackie’s positivity to the book,” he explains.

The five stories work together to flesh out a winning portrait of contemporary Filipino romance with some smart meta-fictional elements and unexpected twists.  The conversational Filipino makes it accessible but it is the winsome tales themselves that make “Para sa Hopeless Romantic” so popular despite its prohibitive price of almost P300. 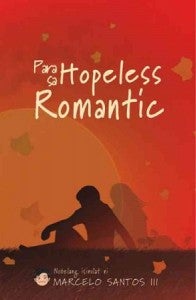 In late 2012, the book caught the attention of Edsel Roy, better known as Chris Diestro, the blogger behind the site Starmometer and the publisher behind the religious/inspirational book company Act 29 Publishing.

Roy also started Lifebooks, which sought a more mainstream audience, and was publishing fare like joke and leisure books. “I had been wanting to do fiction for a while,” he says, adding that he had also wanted to work on a so-called “genre” book, including romance.

Santos’ target audience of teenagers is his particular strength, says Roy.  His strength as a writer “is the youthful energy exuded by his narratives. The statements are not too mushy that even male readers will like it. His (approach) is different from the usual romance novels. It’s a breath of fresh air for readers of this genre.”

Despite that, Roy had to make some changes: To make the book more affordable, he dropped the comic stories to lower the printing price to just P149.95. He also redesigned the cover to make it more appealing to the teenage target market.

The new book, now called “Para sa Hopeless Romantic: The Special Edition,” hit the shelves just before Valentine’s Day, in February 2013, and sold out its initial 3,000 print run within the month.

Today, the title has 18,000 copies in print, with Roy giving estimates of some 10,000 copies sold, something that Santos appreciates, being the family breadwinner along with his older brother Aris.

“Para sa Hopeless Romantic” debuted at no. 2 on the National Book Store Philippine Best-sellers list for March, and kept that slot in the April chart as well.

Santos believes that the book’s success owes much to his optimistic view of romantic relationships: “Most of my friends are hopeless romantics. They go through the experience of being broken. I want them to read this and know that things aren’t that dark. Sometimes they’ll say they want to kill themselves, and I tell them, if you kill yourself it won’t bring back that person you love. I want to make it a guide for people, like, ’this is love. Read it.’”

The best-selling title also underscores the Filipino’s enduring love for stories of romance. Dr. Ricardo G. Abad of the Ateneo de Manila University’s Department of Sociology and Anthropology notes that William Shakespeare’s “Romeo and Juliet” is the most commonly adapted and translated Shakespeare play in the Philippines.  Everything from Lam-Ang to komiks stories and the ever-popular romance novels reinforces the presence of romance.

“It’s in our literature and the arts; it’s also in our faith—areas of our symbolic world that expresses our deepest longings,” Abad explains. “Perhaps our material world—politics, economics and social structure—is so oppressive that romance has become our opiate or, phrased in a less medical term, our path to hope for a better world.  Perhaps, as well, we see life as a series of challenges whose outcomes we cannot predict with relative certainty despite our best efforts.  So we say ’bahala na,’ because we know that deep in our hearts good will triumph over evil and good karma shall descend on people with a virtuous life and an honest heart.

“‘Bahala na’ is a romantic response to an uncertain world. And since those material conditions have not changed (poverty is still rampant; dynasties, old and new, still control our political and economic life.), then our psychic salvation will continue to rest in romance-that ever faithful, ever true solution.”

Abad adds that technology and time may change the form, but not what lies at the heart of stories. In the same manner, the Net might change how we deliver our stories, but the need for romance is still what lies hidden deep within.

“It’s all in the packaging of romance, I think. The veneer can be hip: alienated protagonists, preferably young, villains with great capacities to maim or kill, noir or exotic settings, the language cool, the attitude postmodern, the politics radical, the props products of modern technology.  The writing can be literary, with allusions to classic literature and modern philosophy, and peppered with quotable phrases. But underneath it all, it’s still a story of protagonists battling powerful enemies for the sake of love or friendship (another form of love), and winning in the end, whether they are dead or alive, alone or in the company of others.”

Santos has clearly taken advantage of those available technologies. He maximizes the use of Twitter and Facebook to promote his work, not entirely a surprising turn for this new media marketing specialist at Star Cinema.  His works in this outfit include the online promotional campaigns for the studio’s movies such as “Bromance” and “It Takes a Man and a Woman.”

It’s probably this exposure that’s behind his dream of making movies someday, romantic comedies in particular. Santos is also involved in Project Good Vibes, a group of musically-gifted young Filipinos who might have inspired his dream of doing a “Glee”-type production someday (projectgoodvibes.com).

Despite its success, “Para sa Hopeless Romantic” has taken some heat because of its casual approach to language.

Santos says he initially tried to write the book in more formal Filipino but it just didn’t work. “It just wasn’t me,” he says. “As long as (readers) understand it, I’m fine. I’m not trying to be profound. I always have doubts in my work, but I can see that people super appreciate what I’ve done. It makes me happy and inspires me to write more.”

In fact, he already has a sequel in the works. “Para sa Broken-hearted” will be out from Lifebooks, hopefully, by December. His other plans include writing more of his kind of books and adapting more of his Love Story on Video pieces.

Another publisher has taken notice and made an offer but for now, he is sticking with Lifebooks.

Roy thinks Santos is bound to have a long, productive career as a writer: “There are only a few authors who can say that their first novel has been a best-seller and he’s one of them.”

Santos understands that he is now a messenger of love regardless of what medium he uses, but he is dedicated to getting out the word that love should be a source of hope in our lives.

To all hopeful romantics out there, the writer offers this counsel: “Maybe not now, but the time will come when love will, on its own, come into their lives.” •